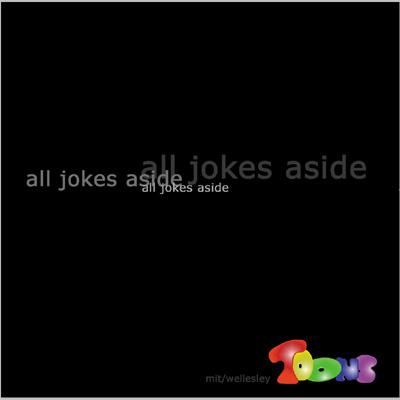 The MIT/Wellesley Toons have released another average album to the world of college a cappella. There is nothing innovative or creative here, no standout tracks, and surely no reason for a consumer to spend money on purchasing this disc.

I wanted a lot more from The Toons on this project. After reviewing their previous release, I expected to see them take a step forward, but it just didn't happen. The Toons seem to be spending too much time trying to sound like "pretty" singers rather than harnessing the music and letting it erupt from their soul.

Brooke Bryant provided the strongest lead on the album with her spirited rendition of Red Vines. Other soloists were able to provide competency on lead, but soloists who really captured the song were few and far between. I'm not sure how The Toons choose their soloists, but I'd find a new process that will get better voices on some of the tougher songs. I'm not sure why the soloist was chosen for Tiny Dancer, but surely you had someone who could at least hit the notes without straining, right? Or you could at least have changed the key to help him with the solo line. These are simple changes that would've made a world of difference.

The Toons have talent and promise. I wouldn't hesitate for a second to go see this group in concert. They just need to find their niche, harness their energy, and learn how to lay it all down on recorded media for the world to enjoy.

When I last reviewed The MIT/Wellesley Toons, I was frustrated by the highs and lows. Parts of Holding Our Own gave me chills, and sometimes they were not the good kind. All Jokes Aside is The Toons' latest release, and all jokes aside, it does not hold its own.

The Toons are cursed with the average. They wallow in it, and only briefly emerge into the realm of good. Soloists lack power, falter in pitch, or fail to compel. The one exception is Brooke on Red Vines. Why didn't she have more solos? A beautiful opening in No Such Thing is for naught when the shaky solo enters. Sweet soprano lines in Adia are brought down by a weak, wispy soloist.

The arrangements are good, but often poorly executed. The energy is high, but the blend is off. The mixes tend to hide the soloists, and the percussion is only decent. Their song selection ranges from very interesting (Red Vines, Not An Addict and Everything) to pedestrian (The Freshmen, Adia, My Favorite Mistake).

The Toons have patches and moments, but never seem to pull it all together. The potential is there. But All Jokes Aside is not the fulfillment of that potential.

Drawing its membership from the left-brained world of Wellesley College and the right-brained world of MIT, The Toons' All Jokes Aside is an odd brainchild. Unfortunately, despite their dual-sided mental capabilities, the final output is simply another mixed group offering a mixed bag of pop fare with mixed results. Much as the two sides of a person's mind don't always agree, the female and male voices have a number of moments where blend, tuning, and overall consistency of texture suffer. The final outcome is cognitive dissonance for the listener, despite some exciting group and soloistic moments.

It's really a shame that this album can't be scored higher and deserving of higher praise. The recording is reminiscent of mid-'90s Off the Beat (only without the star soloists) to such a degree that All Jokes Aside is in some ways tastefully anachronistic. Further, many of the arrangements and learned dynamics show off a great deal of musicality. One example is Kieran Pechter's version of the Verve Pipe's The Freshman, which arguably makes for a more pleasurable listen than the original song. Overall, the group does a fantastic job singing with energy and delivering high moments with appropriate rises and falls.

As is often the case, it's the solo performances on this disc that put The Toons in the solid "Average" category. Besides the aforementioned background issues, All Jokes Aside suffers from a dearth of remarkable leads. Most were solidly delivered, but there were few truly memorable spots. Listeners will not be able to ignore a passionately delivered solo from Brooke Bryant on the album's opener, Red Vines by Aimee Mann. She was the only one to truly own her tune and to make something superlative out of her performance. Incidentally, I was surprised to hear an album where the backgrounds were more excited-sounding than the soloists. Usually it's the other way around.

Regarding vocal percussion, The Toons suffer from the typical collegiate recording problem: The drums are too quiet. Pop music relies on the rhythm section to create intensity and to drive the feel and attitude of a song, a fact all too often overlooked by the majority of groups.

The Toons have some passionate singing on this disc, but overall their sound needs cleaning up before their work can be strongly recommended.

For ordering information, visit the group's website or email toons-request@mit.edu.