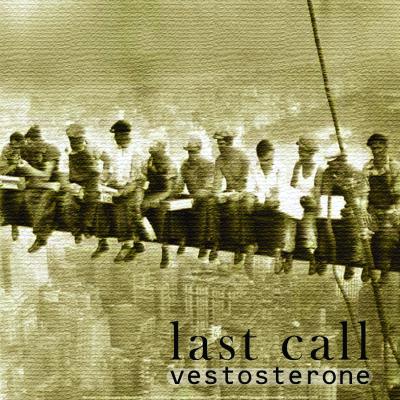 Off the top of my head, I am having trouble finding a more creative album title than Vestosterone. Last Call puts their best foot forward with this release — something to be very proud of — but unfortunately, I still find them to be a few tracks short of a cappella stardom.

The album opens with a very weak rendition of Del Amitri's Roll to Me. The soloist struggles to keep on top of this song, and the arrangement suffers from creative failures. The "roll-to-me" round/breakdown in the middle is very misplaced. I've written a few arrangements with this kind of a switch-up, so I feel like I know what the arranger was thinking. I just don't think it fits in this case.

Drops of Jupiter's arranger offers a nice changeup by choosing not to include any vocal percussion on the track. Using snaps on two and four in place of snares from the second verse forward brings a new feel/sound to this song. Will West, though stronger on other songs on this album (I Guess That's Why), provides a solid solo.

Humor is very prevalent on Vestosterone, and some of it is actually quite funny. I really enjoyed Breaking Up and What Last Call Is Thinking. The dying cat overdubs and the Budweiser frogs parody are great! Brit ... Spears ... Ney! Brit ... Ney ... Spears! I didn't, however, see the need for the Disgruntled Notes. Those are great in concert, but a little out of place on an album. I was also surprised to hear the final gentleman reading the notes use some of the same jokes as the second guy! You can't re-use jokes on an audience!!!

I really liked Somewhere Out There, but it is a bit above the soloist's natural range. On the Sea is great for a live track, whereas the other live track, Thank You, suffers. Using these two tracks as examples, there is a stark contrast in the recorded soloist level, with the latter being the more appropriate level for the album. I hope that these were recorded at separate concerts. If they were, I would lean toward the latter recording style/engineer for future live tracks. The overall quality of the recording was much better.

Overall, this is not a bad effort for a yearbook album. Fans of the group are going to love this release, and I for one will throw it back into the CD player from time to time.

While Vestosterone lacks the maturity to earn it a permanent spot on my playlist, the album is musically solid, highly energetic, and thoroughly entertaining. The men of Last Call have achieved a difficult balance of musical accuracy and energetic performance.

Musically, the album features full, rich, well-balanced chords and good blend. The group's pitch is very good, surprisingly so on live tracks. With a few exceptions, the soloists have good pitch, style and technique without sacrificing Last Call's signature energy. The group's arranging skills are strong — nearly every tune made good use of the group's ability to blend warm chords in an active, layered way. Particularly cool were the backing vocals "vehicle baby anywhere you wanna go" (Vehicle) and "dim zah oh num nah" (On the Sea). A few arrangements overused standard vowel sounds, though, with a few too many "oo oh ah" progressions and repetitive "jens" or "nows".

On live tracks, the group certainly holds its own. Blend suffers, but is still decent. The balance between soloists and backgrounds and between high and low background parts is not great, probably because of the stage miking setup. Soloists are definitely weaker live, sounding a little raspy and straining for the top notes.

On studio tracks, the recording work is very good. Reverb and delay are appropriate for each song, and the balance between parts is excellent. Soloists are warmed up with extra creamy compression. Deliberately bad EQ and extreme panning angles isolate the comic lyrics from the singing on Breaking Up. The wide panning on the vocal percussion of We Built This City gives it extra crispness and a feeling of space.

The album is not without flaws. Most critically, songs are inconsistently equalized. The bass parts range from manly warm to barely there, but are rarely authoritative. This is not just a problem on the live tracks. The vocal percussion has little presence. It's trebly, and Last Call flavors each track with VP rather than featuring vocal percussion as a separate instrument. For a more rockin', modern sound, Vestosterone could use a serious bass EQ and VP upgrade.

Vestosterone has some rhythm problems in the first half. The percussion, solo, and backgrounds are not quite in sync, especially on the first three tracks. Cutoffs feel occasionally sluggish throughout the album (especially Roll to Me, We Built This City, and Drops of Jupiter). Scattered rhythmic imprecision is often a problem for groups with strong and active arrangements — some of the climaxes just don't quite build enough.

Though not aiming to be artistically inspiring, Vestosterone is a worthy album. Last Call is energetic and entertaining throughout, and manages to sing quite respectably as well.

Picture a group of clean-cut, all-American gentlemen at an elite university on the East Coast. Visualize these dashing young fellows outfitted for their first job interviews — power ties, two-button jackets, dress shoes with tassels. Now close your eyes and imagine what these same fine, future leaders of America might sound like singing rock-n-roll, pop, and R&B. Having trouble? That's ok. You're right. It just doesn't fit.

The overall sound of Last Call is clean, with acceptable intonation in a nice glee-club style. The blend is quite good. Vowels are matched. Sometimes chords ring or jell. But accuracy isn't enough when it comes to the cover songs on Vestosterone. It's too square, generic, and conservative. The album lacks spirit, energy, intensity, and attitude.

The live cut vocal numbers (Thank You; On the Sea; What Last Call is Thinking) are sloppy without contributing enough vitality. Each sounds like a classic case of performance jitters and pandering to the crowd at the expense of quality singing. Studio performances are tighter and more precise, but still lack any real semblance of exuberance.

Four of the tracks are skits taken from live performances (Disgruntled Notes I-III; Crossing Over). They get feeble laughter from the audience, but none from me. I have yet to hear a skit that translates well to the medium of recorded audio. A fifth cut, What Last Call Is Thinking is essentially a skit in song format. It's no more successful than the others.

Last Call fails to credit any writers for their cover songs, instead listing those they believe to be the original performers. In addition, they take the credit themselves for track six (What Last Call Is Thinking). It is actually an arrangement of D'Abo and Macaulay's Build Me Up Buttercup (BMI), made famous by The Foundations. If only Last Call's citation accuracy matched their vocal purity.

Two songs stand out because of the soloists. Will West offers a delightfully clear, clean, and emotive rendition of Drops of Jupiter, backed by some cool, crunchy chords. And the last track on the CD, the painfully hickish Keep Your Hands To Yourself, sparkles because of Eric Lappart's impressive twang.

In the end, Vestosterone could use a healthy dose of testosterone. Luckily, easy-to-use, painless patches are now available (www.antineedles.com). Last Call's album is nice enough. But it's got no balls.

For ordering info, visit the group's website or order through Mainely A Cappella.