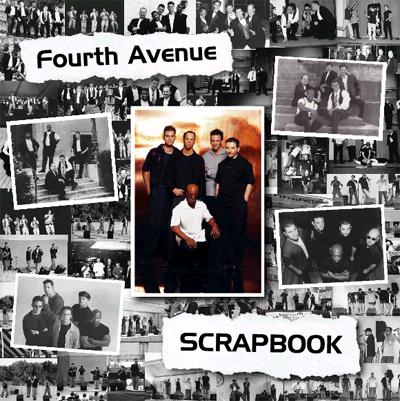 I likened Fourth Avenue's last release, a 4-song mini-album entitled 100%, to an appetizer, and suggested that I'd wait for the entrée. Now comes their latest CD, Scrapbook, and I suppose I deserved this, but it feels like the salad course — a bunch of diced-up pieces tossed together to make a tasty dish, but not a filling meal.

Truth be told, the album's title is as accurate as any I've seen in a cappella. Twelve tracks, plus two bonus tracks, featuring five separate incarnations of the group and barely thirty minutes of music (only three tracks over 2:30!) create a very palpable scrapbooky feel — like snippets of recording sessions or concerts or repertoire have been "pasted" into a CD for the listener to casually glance through rather than truly absorb and enjoy. If this was the goal, then in that, the group was successful.

That said, what would a Fourth Avenue album be without conflicting thoughts — many of which are a repeats of notes I've made on earlier efforts? The arrangements, as has come to be expected of Scott Dawson (who has a hand in most of them), are generally first-rate, with a somewhat lazy take on You've Lost That Lovin' Feeling being the only real exception. Mo Harris' thumpin' VP and bass licks from Jim Brown and Morgan Sinclair are rock-solid. The soloists, for the most part, are energetic and fun, with Ryan Holway's power tenor being the real standout.

However. There always seems to be a "however" with these guys, though to their credit, the hiccups are fewer and farther between than in the past. As previously mentioned, the songs are incredibly short (heck, even with a breakdown section interpolating The Red Hot Chili Peppers' Give It Away into Jailhouse Rock the song barely crosses the 2:00 mark!). This is not in and of itself a bad thing, but the album feels like a series of jabs without any knockout punch. Furthermore, the background vocals still sometimes betray the formality of singers' legit training (check out the What I Like About You echo on the opening track for a good example) and Scott Dawson's distinct baritone pierces the blend a bit too much in places. Repertoire-wise, this album shades toward doo-wop with some old time rock ‘n roll thrown in for good measure — again, not a negative in theory (the CARA-winning In the Midnight Hour is a definite highlight), but it gets a bit monotonous when it comes from a group that is already proven to be capable of greater diversity and complexity.

One final point: I'm an unabashed Gabriel Mann fan and will happily recommend him to whoever will listen to me. But if you're wondering what all the hype is about, then this CD will give you a clue. The mixing duties are split between Darren Rust and the "G-Man", so you truly get a sense of different aural sensibilities and production style. This is not meant as any sort of slight to Mr. Rust, who mixed the above-referenced CARA winner and does nicely with the lighter fare such as Lullaby and Lovin' Feeling. But when it's a full, powerhouse sound you're looking for, coupled with inventive processing choices and a deft touch with stereo mix and e.q. (check out the treatment, placement and movement of the drum track on Fade to Grey for example), there's no wonder Gabe has become the go-to guy.

As for Fourth Avenue, I continue to eagerly await the main course, where they take the energy of their live performances (as heard on Why2K?), mix it with the originality they showcased on the better half of 100%, and top it off with the polish that's evident on Scrapbook. At this rate, their greatest hits CD should be titled "Dinner is Served".

Fourth Avenue's Scrapbook presents snapshots from the group's ten-year evolution "from a street corner doo-wop group to a high-energy, contemporary vocal band". Like many compilation CDs, the resulting scrapbook is hit-and-miss. As the band's line-up and musical taste shifted, so did the quality of its results.

The set list features a mix of doo-wop classics and originals, often featuring cornball humor. Although most of the work is technically solid, the overall feel is somewhat cheesy. Tempos are quick, songs brief. The original ballads don't have the songwriting sophistication a cappella fans have come to expect from pro groups. Worse, a number of leads just don't have the soul to make this material convincing. A Cappella Funk has none.

The huge exception is Chris Steward, who has only two solos, but hits both of them out of the park. Fourth Avenue unwittingly provides an illustration of the power of a great soloist by including two versions of Splish Splash, one of them featuring Chris. Chris changes the entire spirit of the song; it doesn't sound like the same song or even the same group. He brings the same magic to In the Midnight Hour, a CARA-winning track from 1998.

The band does have strengths that carry through the album. Tuning and blend are uniformly fine. The band always brings a bouncy energy to each tune. Gabriel Mann does a typically strong job with the mix. Even so, the vibe of the album just rubs me wrong. Scrapbook is going to end up on my shelf.

Imagine this: in a misguided play for relevance with the cool young people, Marty Culp, the much-loved Will Ferrell character on Saturday Night Live, decides to start an a cappella group. The people he recruits are all solid entertainers and great singers, but their talent is overshadowed by the fact that the person running the show is Marty Culp. Such a group would probably sound a lot like Fourth Avenue.

For those who haven't seen the classic skits, Marty Culp and his wife Bobbi (played by Ana Gasteyer) are middle school music teachers who are often called upon as emergency entertainment when the band doesn't show. They invariably rise to the occasion with a medley of hilariously butchered pop songs, sung in an exaggerated operatic style with square rhythms and cheesy keyboard accompaniment.

Fourth Avenue's Marty Culp figure is baritone Scott Dawson. Dawson actually bears a striking vocal resemblance to Culp, possessing a wooden and uncontrolled vibrato that not only makes his solos difficult to listen to, but also blares away prominently in the background, compromising an otherwise nice blend. But more damning than Dawson's vocal limitations are his songs. I'm Feelin' Lucky Today and Psycho Chick are dreadful attempts at humor that end up being funny for all the wrong reasons. A Cappella Funk is basically a "look how much we rock" number, and as is often the case with such songs, its lyrical boasts are ludicrous; the song sounds far more like Pat Boone than James Brown. (Actually, the song is eerily reminiscent of the introductions the Culps themselves use for their medleys: "Why don't you put your seats in an upright position and fasten your belts, 'cause we're about to experience some pretty bumpy funkulence", for example.) Dawson's lyrics are filled with lines that are clearly only there to finish a rhyme, and he has a great deal of trouble matching words to appropriate rhythms.

Fourth Avenue's covers, most of which Dawson had a hand in arranging, lean strongly toward oldies and doo wop. Unfortunately, the arrangements are overly simplistic and tend to stay on one chord when three or four would do. I can't figure out how the hell In the Midnight Hour won a CARA; Dawson's arrangement spends too long on the tonic chord.

It's a shame, because talent runs deep among the other group members (and, because Scrapbook is a collection of recordings from the past 10 years, a lot of them are represented here). Mo Harris is easily one of the best vocal percussionists in the business, although he occasionally overdoes it (Splish Splash). Jim Brown and, especially, Morgan Sinclair are nimble, percussive basses. High tenor Ryan Holway and the rotating cast of second tenors all wail the lights off their leads.

Interestingly, on the two tracks where Dawson wasn't involved in the arranging or writing, the album takes off. You Looked Right Through, written by Brown, lacks a hook and has awkward lyrics, but it boasts an interesting, full arrangement and a tight sound. A live cover of Jars of Clay's Fade to Grey, arranged by Holway in a sharp departure from the oldies paradigm, is the only track on Scrapbook that I particularly want to hear again, thanks to awesome bass work by Sinclair, a sensitive lead from second tenor Ben Chilcote, and without a doubt the most astonishing percussion line I've ever heard.

Mixing duties on Scrapbook are split between Gabe Rutman and ex-Blender Darren Rust. Gabe's tracks have his signature edgy sound, which mitigates the cheese factor slightly. Unfortunately, Rust was a little overzealous with the Auto-Tune. OK, more than a little. All but one (Splish Splash) of his tracks have the dreaded "harmonium sound". The robotic intonation ruins Dawson's only decent composition on the album, Lullaby, which otherwise successfully conceals its nonexistent melody and generic lyrics behind gorgeous harmonies.

This was a tough album to rate, because as much as I dislike it, it passes on all the usual points of musical evaluation. But it made me groan and cringe way too much to avoid being consigned to the pile of CDs I never listen to that I use as a bookend. If you think the Culps are great musicians and don't understand what's so funny about them, Scrapbook is the album for you. But the wise motorist will steer clear of Fourth Avenue.

(P.S. I do highly recommend that VP enthusiasts check out the clip of Fade to Grey on the band's website. Amazing stuff. Really.)

[Note that Joshua's comments refer only to Fourth Avenue's recordings, and not to their live show, which Joshua has not seen. — The Editors]

You can purchase all Fourth Avenue albums at FourthAvenue.com.