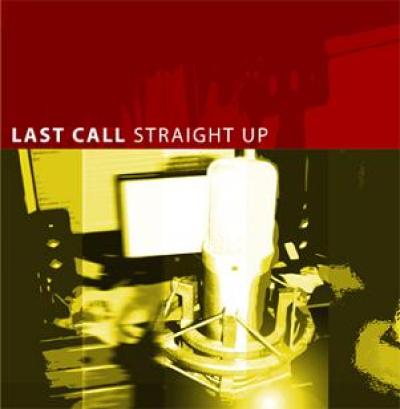 Any all guy group that opens an album with the Orange Mocha Frappuccino scene from Zoolander and follows with George Michael and I Touch Myself has got balls. But I guess that's by definition. Straight Up provides the most heterosexually dubious track list I've ever seen from an all guys group. Attention all right wingers — if the idea of a mass of convincingly groaning men (who refer to themselves as "Callboys") makes your skin crawl, avoid the bridge of I Touch Myself… and consider another album. But if you're cool with a little gender haziness and don't mind some cheesy tunes, Straight Up might be worth a listen. After all, the men of Last Call sing with gusto and precision and mix with some masters.

The album's first tracks really lay it out there to hang unspoken in the air. I shook my head through Orange Mocha Frappuccino, Wake Me Up (Before You Go-Go), and I Touch Myself, asking "Why?", "Why?", and "Why?". Last Call really digs in with passion, though. Energetic soloists lay it on thick, with good male voices and style. The effeminate soloist in I Touch Myself has a voice that is remarkably clear and crisp. Like true entertainers, the group really sells these songs.

The comfortable, folksy style of the soloist in Free Fallin' is charming. He lets loose in the choruses, really wailing away in a take-no-prisoners Petty style. His supporting tenors, singing in head voice, just don't have the power to make it "5"-worthy.

Other songs feel like they are too little, too late. Hemorrhage feels like a washed out Off the Beat arrangement, though Tat Tong reminds me of Gabe Mann's big Peter Gabriel voice. Numb has bafflingly lost all bass, baritone, and low-end vp impact, leaving its whiney soloist stranded and belting into the stratosphere with some spineless tenors. All For You tries to make up for overdone-ness with overactive syllablization. More disappointingly, what should be a huge, widespread choral section in the bridge sounds like two guys, five tracks, and two chords.

Raise your hand if you're sick of a cappella covers of Big Yellow Taxi and September or if you aren't slowly tiring of The Scientist. Last Call redeems even these songs. Soloists fit their solos, especially the spacey voice of The Scientist, which evokes Newton dreaming under the apple tree. With the help of a lot of mixing, September grooves along just fine. The bridge and ending of Big Yellow Taxi are lame, but the soloist's laid back demeanor and sorrowful tone lend meaning to a song that's becoming tired (it came out in 1970, kids!!!).

The studio work meets high standards yet feels inconsistent. Five engineers will do that to an album. Bill Hare's tracks, The Scientist and Free Fallin', are also my favorite tracks of the album. The Scientist arrangement features some added and accentuated harmony lines that really enhance the mood of the song. Hare's verb and delay wash these chords over you, an engaging and enveloping feeling until the arrangement ends on an abrupt block chord. As always, Hare's tracks are balanced beautifully and sound crisper and cleaner than a virgin's bleached sheets hanging out to dry on the first day of May (except Witchcraft "which" I blame on a choppy arrangement).

So despite some odd ideas of what make good songs for an album today, Last Call believes in its choices. The "callboys" sell it, and if you'll buy it, Straight Up might just be straight up your alley.

What's up, RARB Forum regulars? Have you checked out the latest CD from Cornell's Last Call? You really should because it totally seems like it was made for just us RARB Forum discussion people. I love that they used, like, every single "known" engineer like Bill Hare, Dave Sperandio, and John Clark. That was so genius! I mean, it's one thing just to be able to do ONE album with one of those guys — but to have all THREE? Even if no one at Cornell gives a crap who they are, I sure am psyched to see album that showcases as much a cappella insider knowledge as possible! What could be BETTER? I want to give a shout-out to the Last Call fellas for thinking of us. We love you!

I disagree. There is too much of a focus on production on this disc. Even the liner notes specify that they needed "help from...multiple acclaimed a capella engineers." How many people at Cornell give a damn who these people are? Focus more on the performances. About half of the soloists were mediocre. Lots of the arrangements are too busy. The group does not always blend very well. The group is also used a lot of "autotune" and "effects." The last track, September, is so produced - It's not even a cappella! It's just techno. They obviously get money from their school. That's so unfair.

Back to Savvy's comments about Wake Me Up, that track is mostly great because of the soloist (Tristan Meador) and the performance by the backing voices. Tristan also blows the doors off When You Say Love Me. I never thought I would like a song by Josh Groban, but he's so good you can't help but like it! I was a little surprised to hear Tat Tong tearing it up on Hemorrhage. He obviously has improved since his "solo" debut awhile back. Hey, Tat — you around? I'll be on IM until 5 A.M. — hit me up!

Not every song is as crisp or tight on this album as it could be, but they all have a really great energy. How often do you see 12 pedal-to-the-metal tracks on a collegiate album? Is it perfect? No — but it's imperfections don't distract you, for the most part: ironically, it makes it a better album in some ways. It's more...real.

As a recorded work, Straight Up is an excellent example of the great things that can happen when a collegiate group takes an ambitious approach to their studio recordings. The 'Bubs and Off the Beat realized this a long time ago — Last Call seems to have, with little fanfare, joined the chorus. Nice job, fellas!

Speaking of fanfare, I bet those jerks reviewing the album will probably be dumb enough to pan it. They don't have a clue about anything. Especially Mark Manley — he's an arrogant bastard. Fortunate for him, he's amazingly good-looking...

You know the names: Bill Hare, John Clark, Dave Sperandio and Dylan Bell. So you'd think a lineup of these über a cappella engineers would come together to make a top notch album by the 2002 ICCA runner-up. Unfortunately, not only is Straight Up unspectacular and inconsistently mediocre, but utilizing five different mixers (Hong Tat Tong is the fifth) made it impossible for Cornell's Last Call to give their newest album its own personality.

Last Call would have been better off choosing one mixer for its album, and based upon the fact that Hare, Clark and Tong all had their moments, any one of them alone would have made Straight Up a better album. (By the way, the only a cappella genius not included was Gabriel Mann. Why wasn't he given a track or two to mix?)

The arrangements are mostly weak and empty, usually the reason why great live all-male groups can't make the transition to the studio. I have no doubt that these arrangements, mixed with Last Call's humor, work brilliantly on stage. That's the artistic choice they make, and there is nothing wrong with that. The biggest example of this is I Touch Myself, which absolutely must kill the audience in a concert setting, but is nothing more than boring and dull on the album.

The soloists range all over the place. At the top is Tristan Meador, who pulls in the two best leads on Josh Groban's When You Say You Love Me and Wham!'s Wake Me Up (Before You Go-Go). Flip the coin and on the weaker end you'll find Christopher Jachmich on Linkin Park's Numb and Tom Petty's Free Fallin'. I fear Jachmich likely embodies the essence of Last Call as previously explained, in that he probably performs his solos with great gusto on stage, but can't pull it all together in the studio. He sings Numb too "nice." It's LINKIN PARK; you need tons of grit and you must mash your vocal chords until they are stripped of all their energy and beauty.

As a reviewer, I tend to attack the bad before the good, so let me finish up with the positive. The final two tracks on Straight Up are brilliant. Why they are buried at the end after five straight subpar songs, once a listener has had a chance to turn the album off, is befuddling. When You Say You Love Me is one of those rare beautiful gems usually left to the coed groups. Everything about it is good: the solo, the arrangement, the tuning, the chords and the mix. Last Call then saves the most fun for last with September. The intro is a little long, but once the song gets going, it really moves. Tong takes some real gambles with the arrangement, but they all work, leading to a top notch track.

Here is the advice for the next go-round: use one engineer, apply more grit and energy, pick your tracklist carefully, let it simmer for 10-15 minutes and serve immediately. Last Call has the ingredients for a tasty treat; it was just a bit overcooked this time.