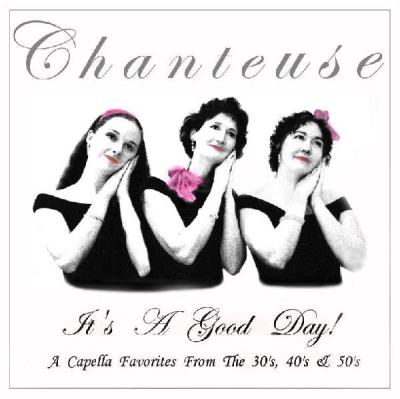 This album surprised me in a good way. It's not often as a RARB reviewer that you receive an album from a virtual unknown in the a cappella world and it turns out to be a diamond in the rough. These ladies do their thing and they do it damn well.

I have a feeling that if I were to see Chanteuse in concert, I would find that their album is a complete and accurate representation of the group's live sound. You are not going to find any studio tricks on this album. This is just downright, righteous, three-part a cappella singing (with a few percussion/rhythmic instruments thrown in for flair). Major kudos for such a natural effort across the album.

The blend that these three ladies create was the first thing that really stuck out to me while listening to the tracks. Two of the three are sisters (which helps), but regardless of that, it is such a pure and smooth blend, these ladies obviously spend a lot of time together rehearsing. On tracks like The Tennessee Waltz, even the slightest soloist inflections were followed by the voices singing harmonies. These tracks are a perfect example of how when you master a blend on easy tracks, the more difficult tracks just fall right in line. Two thumbs way up!

The arrangements on the album were your basic standard three-part arrangements. I'd like to see Chanteuse expand in this area to create some original, creative interpretations of these classics from the '30s, '40s, and '50s. I kept thinking to myself, if I wanted a recording of Blame It on the Bossa Nova, what would make me want this version over other available recordings? I think Chanteuse has the talent and ability to release an album that would give you a reason to choose their recording.

The individual tracks waver between average and excellent across the project. On some of the weaker tracks (Sea Cruise), rhythms are rushed and intonation slips in and out. It's almost as if you can hear which tracks the group enjoyed singing more than others. I would caution Chanteuse against singing your favorite songs in a different mindset than just your average song selection. It's a very difficult thing to do, but just as the music comes through the speakers, in a lot of instances your personality and emotion (or lack thereof) do as well.

The businessman in me couldn't help but wonder about the marketability of such a group. How much of a demand is there for three-part female a cappella singing songs from, on average, 70 years ago? Then I came to the conclusion that with Chanteuse, it's not about the business, it's about the music. These ladies sing this music, in this way, because this is what they love to do.

As I stated earlier, I would really like to see Chanteuse expand and create a new interpretation of these songs for future recordings. But even until that happens, if you're looking for these songs on an a cappella recording, I can highly recommend the purchase of this album.

I was thrilled when I read the liner notes of Chanteuse's CD It's A Good Day. Three women singing favorites of the '30s, '40s, and '50s? As a big fan of the Andrews Sisters, Carmen Miranda, and other female singers of the Golden Age, I couldn't wait to hear the interpretations of The Princess, The Debutante, and The Diva (as the members style themselves).

Unfortunately, Chanteuse has borrowed the Andrews Sisters' voices, but not their souls. Excellent blend and strong pipes can't make up for the wooden delivery and lack of energy that trouble most songs on the disc. Blame It on the Bossa Nova, a fun and flirty song, is workmanlike here. Sea Cruise and Something's Gotta Give, which should (in their own way) rock, move through the motions without much feeling. Tennessee Waltz is the only number that delivers much emotion, as the soloist croons about her lost love. It sounds like the singers are trying too hard to hit the notes and forgetting to express the meaning of the words they sing.

The group does better with up-tempo numbers that incorporate hand-held percussion. The slower numbers suffer from a painful dragging feeling. The singers' bright tone is perfect for much of this material, but prevents the angelic, floating sound that might make the ballads soar. The songs are mostly very short, but they feel longer than they are, which is never a good sign. Tuning takes a fair number of hits, too.

I love what Chanteuse is trying to do; they just miss the mark with this album. I'd love to see them give this kind of material another try with more rehearsal time so that they can give this material more oomph without sacrificing accuracy.

Chanteuse is a group of three ladies from Oregon who sing hits of the '30s, '40s, and '50s. The songs are in three-part harmony and most are a cappella, though percussion (not the vocal kind) and guitar are added in some tunes. For me, it was like listening to a female version of Forever Plaid.

Looking at my scoring, you might think I was just being lazy in scoring almost every song average. This is not the case. Try as I might to distinguish the particulars of each tune, they all jumble into the same mess for me. The main problem this album suffers from is monotony. Every song is the same three voices in the same part arrangements, with the same harmonies, in the same style, and with the same level of energy. Even the keys get old, for there is little tonic variation. It is very uniform, and therefore I found it difficult to maintain my attention.

The ladies can clearly sing. They must have practiced quite a bit, because they are perfectly in sync almost without exception. Their sound is full and mature, with a touch of vibrato perfect for the music they are singing. Tuning is perfect; they even stay in-tune during tight harmonies throughout glissando runs in all three voice parts. The mix leaves a little to be desired, with consistently too much alto throughout. There is rarely enough melody. Pulling the alto back a little would make their sound much more palatable over long periods of time.

The real folly of the album is the dead-pan lack of energy. It starts out well enough with Yellow Bird. But the mood is lackingly pleasant. On songs with more motion there is rarely a change in energy. Take Something's Gotta Give. After the tempo change, they languidly sing with the same intensity as the opening, slower tempo. Even on songs that were meant to be fun, like Jamaica Farewell, they remain prim, proper, perfectly in-tune, and generally a little stuck-up sounding.

The monotony could be broken up with a little solo action. Have the outer parts do a little oohing and aahing while you let a soloist rip a little on the lead. On the brief, half-measure snippets when someone gets her own line, it is usually done with twice the intensity of the trio lines. If they let loose a little, things would be much more interesting to listen to.

Finally, something which bothered me throughout the experience was the fact that every breath was distinctly audible. An amplified breath coming through my speakers is not a pleasant sound. A little more care could have been taken to minimize the effect.

All in all, a decent album with little spunk. Sounds great taken a song at a time. Listening to 14 straight tracks, you had better hope you have something better to do.