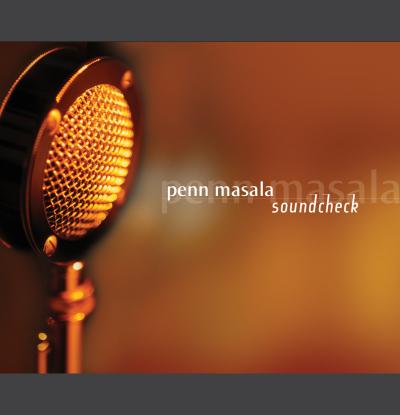 Penn Masala continues to find success with the direction that they have pioneered in a cappella music. Their latest album, Soundcheck, is a tribute to how far the group has brought Hindi a cappella over the past few years, but it is also a glaring reminder of where they still need to go. Being the first at something doesn't make you the best.

The first thing that stood out to me on this album was the drastic improvement in soloists from their previous release. Some of these guys have some serious chops. Rishabh Jain has a sultry voice perfect for the delivery of Tanha Dil, Koi Kahe Kehta Rahe, and Na Tum Jano Na Hum. Other notable soloists are Ashish Doshi and Sandeep Acharya.

The weakest aspect of the album was the vocal percussion. They use vocal percussion in advanced settings with advanced rhythms but using beginner sounds. It comes across as, "Hey! Look what we can do!". In many cases, it offers more of a beat-boxing rather than a vocal percussion sound/feel, which though possibly intentional, I felt was very inappropriate against these charts.

The arrangements on this album are all over the map. I found that though all of them are very competent and support the group, each one has trouble transitioning between the Hindi and the English sections. Very little creativity shines in the arrangements, with the exception of the Can't Help Falling Love in Love interlude in Koi Kahe Kehta Rahe. In addition, the arrangements tend to suffer for repetition in the structure and syllable choices.

My personal favorite track was Jumma Chumma De De, sung by a very inspired Viral Juthani. The texture, movement, and overall energy in this song captured what this group is all about.

In my opinion, the biggest thing holding Penn Masala back from complete recorded success is fine attention to detail. Small intonation slips among the backing voices or a soloist holding on to a pitch too long consistenly hurt the quality of sound on this album.

One quick note on the album design and liner notes. This is by far the most professional-looking a cappella album (professional or collegiate) that I have ever seen. Just looking at the album makes you want to listen to it. More groups should follow Penn Masala's example when it comes to packaging a product.

Overall, this album is very solid. To me, it just sounds like they rushed the recording process to get it out on time. Definitely an album that everyone interested in Hindi a cappella should buy, but this is not the masterpiece that a group like Penn Masala is capable of releasing.

Sigh. Penn Masala's latest CD, Soundcheck, is yet again an exercise in disappointment for the listener. Masala enjoys one of the more unique premises for a collegiate group: "combin[ing] South Asian music with a Western musical style". But as in their last album, sloppy attention to rhythmic and tuning detail, inconsistent (and generally weak) soloists, and creative missteps mar what could have been an enjoyable and distinctive outing.

Even more ominously, the "new sounds and different types of fusion" that Masala claims as its charter don't quite play out in practice. I would have been intrigued to hear true reinterpretations of overdone pieces like In Your Eyes, If I Ever Fall in Love, and Fields of Gold with a distinctly South Asian stylistic slant. What we get instead is a group of South Asian and Western songs linked (apparently) only by a shared underlying chord. Much like badly executed fusion cuisine, the group appears to have thrown any number of incompatible ingredients together in the vain hopes of creating something different. The effect is somewhat as if someone left a karaoke track running on repeat with Masala overlaying anything that fits.

On the flip side, a few of the Hindi tracks here are fairly enjoyable. In fact, the Hindi halves of the Hindi-Western mixes are usually much stronger than their counterparts in tuning, energy, and solo. But even here, tuning and rhythmic error (sloppy entrances and exits, unsynchronized rhythms) crop up everywhere.

Because I really like the central premise of Masala's music, I wanted to give this album as much a chance as possible. But moments like the egregiously tuned harmony on Otherside and the listless background of Where the Party At are pretty hard to forgive. I'm guessing Penn Masala enjoys a rabid niche audience around the world who will likely enjoy this disc; anyone outside that select group should walk away, quietly and quickly.

I don't speak Hindi. Heck, there are times when I can barely speak English. The best thing about Soundcheck is that you hardly have to understand either language to appreciate the intricate blending of Western music with the infusion of South Asian traditional style. Just when you thought you've heard In Your Eyes one too many times, Penn Masala's there to put a new twist on it by using the familiar bass line to round out the vocals to Na Tum Jano Na Hum. This ain't your average college a cappella.

I wish I had the familiarity with or at least the vocabulary of Indian music to describe how impressed I was with the sound of the album. There are major and minor chords sung effortlessly around tones and chords not even used in the Western musical tradition. The vocal percussion and bass propel the energy of each piece so well that I'd expect to hear some of these tracks at a dance club playing international music. Not only is Where the Party At nearly flawless on its own as a great cover of an American hip hop tune, but the Indian Mehboobha Mehboobha is cleanly integrated into the song. These guys have the ability to arrange Indian lyrics into songs that would find themselves on pop radio if it weren't for the foreign language element.

Churake Dil Mera has a fantastic Justin Timberlake-inspired vocal percussion breakdown in the middle of the song that I love. One of the more evident weaknesses of Soundcheck is the empty sound of a lot of the older English songs, including I Can't Help Falling in Love with You on Koi Kahe Kehta Rahe and Fields of Gold on track 13. After hearing these covered countless times, these parts of the Masala versions don't sound as good as the best a cappella adaptations I've encountered.

My favorite parts on this CD come when I get Indian and Western elements in the same part of a song, which is rare. The combined Indian and American "medleys", as they're listed on the album, are really one half or more of one kind of style that transitions into a piece of the other kind. The best blending of styles comes as late as track 8: If I Ever Fall in Love sounds like it does on every other college album, but takes those "ooh, da-da doo, da-doo"s to back a completely different melody, this time with Indian lyrics and using a non-Western tonal scale.

Production values maintain a solid integrity throughout the album. Soloists are for the most part slightly above average with only a few weak spots. As someone whose exposure to this kind of music was previously limited to Real Videos of Tunak Tunak in college, Soundcheck has opened my ears to a new subgenre of music. Staking their claim as the premier Hindi a cappella group in the world, the members of Penn Masala certainly make it difficult for anyone to come along and follow their act.

Purchase from Penn Masala's website. Just click on the 'Store' link at the top of the page.