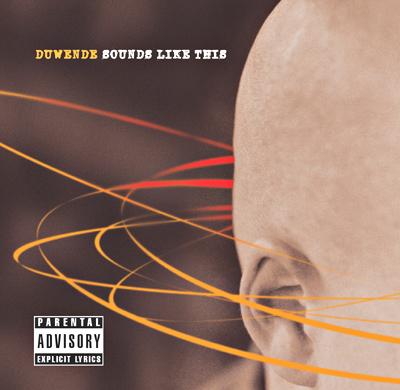 The title of Duwende's newest release, Sounds Like This, seems to cry out for mad-libbing. Duwende sounds like: (1) The Bobs plus spiralmouth, but less funny and less engaged, respectively; and (2) the Beastie Boys plus low-rent Eurotrash Dead Can Dance wannabes. The group gets high marks for effort but doesn't really deliver ... whatever it's trying to deliver. I wish there were another category I could rate aside from Energy/Intensity, which the group has in spades, called Sympathy. Do the songs make me feel what the lead singer sings about feeling? No.

The songs are all originals. I don't understand any of them. They seem to center on the modern style of songwriting where the title has little to do with the content of the track, not to mention its emotion. The tracks are all too long (a serious and persistent flaw in original contemporary a cappella), and indifferently organized (ditto). That plus typically wan lyrics (ditto times two) make for uninvolving listening. Pomper 2003, for example, a true original in every sense of the word, features a suddenly mysterious whispered interlude, followed by a short and unaffecting breakdown placed randomly towards the end, and then it ends. Why?

Something gets in the way of every track. Tuning, for example, is basically fine (although there is some general flatness), but intonation differences among the singers get in the way of real blend (e.g. the soprano descant on Walk Away). Everyone aims for pop, a bit too much when there are five parts and more; the lead is made less consequential (the sound reminds me of The Bobs, especially A Moment of Peace). The tracks sound both busy and thin. A recent thread on the RARB Forum brought up "old school" v. "new school" sounds; Duwende is definitely new school, and it is not very interesting.

All told, while I can't really fault the singers for their singing, the songs themselves left me cold.

Duwende returned to the studio and turned out a new EP, Sounds Like This, once again bringing polished production, huge energy and an edgy sound to the plate. They still have some room to grow, but they have maintained the high level of songwriting skills and originality that kept them in my mind between their first release and this one.

The disc kicks off with Free Your Mind, a straight-up hip-hop tune with newest member Geoffrey Barnes rapping. It is confident and convincing, and it grabs your attention. The lyrics touch on breaking away from top-40 trends, which is precisely what this group is good at doing. They don't have a generic pop sound, there are no ballads on the disc, and they're not aiming to please everybody. Heck, how many a cappella CDs do you buy with parental advisories on them?

The disc continues with strength and confidence. There are some tuning issues in Walk Away, especially in the bridge, but it's empowering and has drive. Bass Ari Picker turns in a great solo on Angel, with a great arrangement backing him. Morgan Phillips takes the lead on A Moment of Peace (So Shut Up), an angst-ridden rocker that sits higher in his register. Although I can't hear his lyrics in the final kick of the song, there's good energy from the whole group there. The bridge of that song is a nice shift that also gives us a chance to hear Picker's bass lines well; they are less highlighted on the rest of the disc. Closing up the disc is Pomper 2003, a redone version of the closer from their last disc. This song has really started to grate on me. It's technically good, and is still a vehicle for the group's huge energy and personality, but I don't think this is the one song I would have picked from their debut release to revamp for this EP.

While Duwende will perform some covers in their live shows, their discs have thus far contained only originals, and solid ones at that. Their lyrics are creative, their melodies are often intriguing, and the arrangements get cool textures from the block. There are times that they could stand to flesh out their arrangements a bit more; the breakdown in Angel, for example, is begging for a bit more complexity before the chorus. The backgrounds sound good, but I feel Duwende still has more to give us.

Have I gone this far without mentioning Edward Chung? Let me remedy that. The original founder of the group, the resident percussionist, and the producer and engineer of all tracks except for Pomper 2003 (produced by Jeff Thacher), Chung would seem the literal and figurative driving force behind the group. He should be proud of all he has helped create, as Duwende has been worth checking out since I first heard them. Take a listen to this EP, catch a live show, and expect more good things to come.

Don't call Duwende an a cappella group. Don't even call them a vocal band. There's need to dump them into the a cappella community's self-imposed ghetto world of novelty niche isolation. Duwende is a band. And their music is for people that like bands, not a cappella geeks that limit their listening to barbershop, choral ensembles, or square collegiate pseudo-glee clubs singing stiff vocal arrangements of corny cover songs.

The band's name, according to their website, references "the creative force that takes hold of an artist in moments of inspiration". They remain true to those roots. Their songwriting is crafted, clever, and thoughtful. The music is driving, catchy, and fiercely compelling. All five songs are strong. Still, there are a few standouts.

The biting A Moment of Peace (So Shut Up) is wildly catchy and aggressive. Geoff Barnes summons the funk and knocks out the raw, confident Free Your Mind. And the outrageous, alterna-techno Pomper 2003 is a downright infectious force all its own. All three command a bodily, physical response. This is not music to which you just listen. It's music you experience.

The band's sound and creative concepts are bold, brave and gritty. Duwende is a rare beast of a cappella; they are unquestionably cool, hip, and intelligent. And they deserve your support. With this release they vault themselves right over the heads of the a cappella obsessive into a space where people know what's really important — making intense, fantastic music. Buy Sounds Like This. It will free your mind. And your ass will follow.