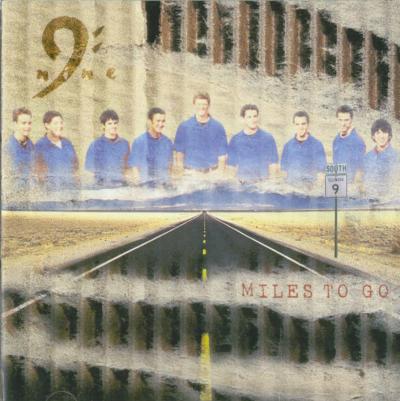 High school pop/rock a cappella is a relatively new phenomenon, and as such, it's always a difficult animal to assess. The overriding temptation is to give the students a somewhat wider berth than that afforded to college groups, and certainly to the semi-pro and professional groups out there. But the mandate here at RARB is to evaluate the music within the realm of a cappella at large, and as a result, high school groups are always going to be at least at a slight disadvantage. Your local high school football team might be national champions, but compared to the Kansas City Chiefs, at least this year, they come up short.

That said, as evidenced on their CD Miles To Go, NINE, the all-male a cappella group at Glenbrook South High School in Glenview, IL (a suburb north of Chicago) has some talented singers in its ranks. If they stay local, groups like The Xtension Chords and No Strings Attached at the University of Illinois or any of the many groups at Northwestern would be wise to keep an ear out for these kids as they matriculate. But good singing alone does not a first-rate a cappella group make. Energy, creativity, arranging, and mixing (among other items) play a big part as well, and it is in these areas where high school groups like NINE are often a bit lacking.

In NINE's case, the single most consistent flaw is a lack of energy — or maybe not energy per se, but vitality or spunk. There is a squareness to the singing that could perhaps be a by-product of legit training for some of the members, or could be tentativeness with singing a cappella rock music (since the only a cappella most kids know before college, or at least high school, is either religious, classical, choral or all three), or could be the influence of the group's faculty leader, Marty Sirvatka. Now I don't mean to bad mouth Mr. Sirvatka, because he has done wonderful work with these kids, and they no doubt would never have reached this level without his mentoring. But I suspect that the elements of reckless abandon, unbridled energy, and/or uninhibited passion (pick one) that come with the uncensored, self-governing nature of collegiate rock/pop groups are muted slightly for high schoolers in the presence of a faculty music director, and the result is more "controlled", less emotional, and ultimately less interesting for the listener. Indeed, it was not altogether surprising for me to discover that two of the arrangements had been lifted from The Virginia Gentlemen — an established, respected collegiate group to be sure, but one with which I have had similar issues of formality and squareness.

Other sore spots are probably less the fault of the group members and more likely the result of circumstance and experience. The album's original arrangements (a few are transcribed from other sources) show a certain simplicity and occasionally betray an unfamiliarity with what works and does not work in so-called modern a cappella (the attempt to replicate the arpeggiated piano line in Your Song stands out as an example). A number (if not all) of the tracks sound as though they were recorded as an ensemble (rather than as individual voice parts), and certain diction slips, very audible breaths, and minor musical missteps may therefore have proven too costly or time-consuming to fix and were left uncorrected. Also, the overall mix is very wet, and while that serves the power chords well in an otherwise disjointed take on The Beach Boys' Forever and the more interesting, though oft-out-of-tune, chords in Wildflower, it hurts the more hard-driving tracks like Drive, Insomniac, and Jack and Diane, which need to be crisper and tighter.

All in all, it's a noble effort from NINE, which, appropriately enough, is celebrating its ninth year with the release of this CD. But as the group itself acknowledges in the album notes, they still have Miles To Go. And so, this album remains a friends, family and community-buy only, but it bodes very well for the future of a cappella on the high school level.

You have got to be kidding me.

These are high school kids?

That is simply not possible. There are collegiate groups that don't sound this good. Great musicianship, solid blocks, mature vocals from the soloists, a sense of fun and enjoyment in their performances, and excellent production make it hard to believe that these nine children have put out an album this remarkable. The bass is at the most 18 years old!?!

" [A] popular male ensemble made up of nine singers who perform, a cappella, a program of light entertainment music. Membership in this select group is highly prized, and entrance is by audition only. In addition to showing vocal excellence, these men are chosen also by their ability to sight read and to sing tight harmony in tune. Nine is in great demand within the school and the North Shore community."

I can't believe that the membership of this group changes each year. The liner notes don't indicate how long this particular group of singers has been together, just that the group has been performing for nine years. Get it? Ha!

I am deeply awed.

There are two items that I could fault the group for, but they are extremely petty. First, four of the arrangements are direct transcriptions of more well known versions (yep, that's the Virginia Gentlemen's Insomniac). They have terrific local arrangers; their director Marty Sirvatka does a fine job on the two he penned (Your Song and No Such Thing), though the latter shouldn't have closed the disc, as it simply doesn't provide a strong enough closure for the album. Producer Paul Langford is simply incredible. His arrangement of Drive will make your head spin.

Second, there is a tendency toward straining and tuning problems in the upper registers (the dreadful Wildflower) across the board. It's usually hidden pretty well, but occasionally there is that "ouch" moment.

They claim to have Miles To Go in their liner notes. To what? A Grammy?

With a solid understanding of modern a cappella and a good command of the music, NINE, a men's high school group out of Glenview, Illinois, puts out a promising and altogether entertaining album with Miles To Go. This mix of pop and a cappella standards is an appropriate repertoire showing off the best of the group's energy, dynamics, and arranging. Soothing low basses and soulful tenor solos are featured on this tastefully produced record, neither overly pretentious nor shying away from attacking the music with full gusto.

Good Things do indeed abound on this album. This track, for example, inserts a "voicetrumental" element in which all voice parts sing the chorus. With flawless tuning, the high energy is maintained all the way through into the repetition of the chorus with solo and background. Even Insomniac plays well; I've heard it a thousand times, and it's pretty fresh here, although not the strongest point of the CD. Peter Bobis offers a fabulous bass lead on 16 Tons that extends deeper than many collegiate singers I've heard. Attention college groups: Brian Mazzaferri's arrangements, most notably Good Guy, are enough to make any of you lucky to have him around, although unfortunately the execution of the song leaves a little to be desired. Brian also has a stellar solo later in Your Song.

Minor infractions prevent this album from reaching full greatness. A lot of audible breaths interrupted the flow of my enjoyment. Jack and Diane's vocal percussion, using a low bass breakdown in the middle, is awkwardly placed in this Mellencamp classic, although admittedly it is followed by a neat audio effect when the background vocals come back in. There's also a studio flub just before Wildflower begins. This track is the most difficult for the men to control; notes start at different moments, the melody and harmony leap around and the intervals lose assonance, and the diction is rather weak.

Two pop culture non-sequiturs: I recognized Forever first not as a Beach Boys song, but as the tune Uncle Jesse woos Becky with in an old episode of "Full House". (Hey, I grew up watching the show.) Your Song evokes Ewan MacGregor's turn in "Moulin Rouge", not the original Elton John. Unfortunately, the first of the four soloists is mechanical in his singing, as though emotion and energy were an afterthought to actually getting the words down at the right times.

The catchy No Such Thing closes off the album with an impressive finish. Despite the liner notes' comment that the group "has so far to go", this simply isn't the case. Miles To Go is not only listenable, but also pleasant and at times strikingly orginal, usually a rarity for groups in high school. NINE's talented men thus have only a few laps, and not miles, to go before hitting the finish line.