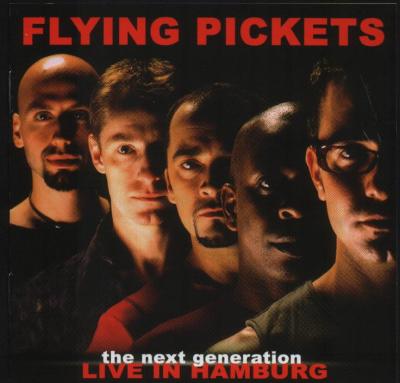 The Flying Pickets are venerable to a degree few other groups could match. Their signature song, Only You (included on this disc), has long since passed into the standard repertoire of startup groups, thanks to its inclusion in the first CASA Songbook. This Next Generation continues in its predecessors' footsteps, with mixed results.

Close harmony and high energy are still the rule, but the overall feel has shifted from polite British a capop to slightly odd-sounding continental vocal band; "ever greater union" apparently involves more than politics. Much of the responsibility rests with the soloists, whose slender voices and midphrase changes of interpretation leave little room for songs to get rolling before they slide into strangeness. Kiss from a Rose features an especially scoopy and tense-voweled lead, matched by the stiff backing vocals; Moon over Bourbon Street is too nasal, without Sting's desert-wind delivery, and drifts into lounge lizard territory; Eternal Flame is such a pretty song, but the lead isn't.

The singers have real trouble matching vowels; I suspect different native languages are getting in the way.

I don't understand some of the arrangements; voicings change dramatically from verse to verse, sometimes from measure to measure. Sometimes the texture is made more interesting, but sometimes the direction or goal is less clear. I felt as if too many songs aren't allowed to build (Love the One You're With, Billie Jean). With some exceptions (Kiss from a Rose, Eternal Flame), there's no momentum. The backing voices spend too much time not singing; I wished for more homophony. The group should do more songs like Mama Loo. On the other hand, I liked the oddly successful Living la Vida Loca, which sounds as if Ricky Martin had been asked to pen the theme song for a new Bond movie (the syncopated high tenor "doo"s during the chorus are supremely retro-cool).

An entertaining but flawed disc, showing some strengths and, if not weaknesses, then imperfections.

The UK's Flying Pickets offer up a pretty good live album that doesn't hold up well in comparison to similar pro releases.

The group has been around for more than 20 years and had chart hits in Europe, which suggests that their approach has been working pretty well for them. But in my opinion, they need a full-time VP. Basscussion doesn't really cut it any more on rock repertoire. Andrea Figallo does a strong job with this tough assignment, but ears that are used to hearing pro VP from the current crop of US groups (including top college groups) will be disappointed. The VP problem, combined with the sometimes over-enunciated and precise vocals, hurts the energy level.

Soloists are strong overall, although since they aren't credited in the liner notes, I can't tell you much more than that. In an understandable live problem, they often go a little over the top with riffs, ornaments, and scats (Guilty; When; Kiss From a Rose; As; etc.). Also understandably, the balance between parts isn't perfect (Let Me Entertain You; Living la Vida Loca), and falsettos sound fairly thin and breathy (Let Me Entertain You; Celebration). Tuning, however, is very strong throughout.

The set list includes only two originals, and the covers are mostly familiar pop tunes that are probably already in your CD tower. While FP's versions do sound different (I Want It That way; Eternal Flame), they don't usually sound better. In a couple of cases, they just don't work — I imagine I'm a lot pickier than a German audience, but the rap intro to Celebration is a cringefest.

I'd take a pass on this one.

Let's start with the hates. There are some horrendous tonal problems on a few of the songs. The worst is in the upper tenor during Celebration. It's at the end of the concert and he just doesn't have the chops to maintain the tuning on this very exposed arrangement.

Which leads to a second hate, the arrangements. Well, not all of them, actually not even most of them, just three make me cringe. Celebration, I Want It That Way, and Love the One You're With make you remember that there are only five guys up on the stage singing. Because you can hear every sketchy lyric they sing.

Yes, my third hate is that they take some creative liberties with song lyrics. It got to the point that I got tired of looking up the original lyric and just chalked it up to artistic differences. It just makes the songs hard to sing along to. Not a big deal until the ad libs come into play. One more "Throw your hands up!" and I was going to throw up on my keyboard. And because this is a concert (with the cheering from the crowds at inconvenient times, and the conversations that only those present cared about), there aren't a lot of studio enhancements. I want a studio album from this group. That album is going to be O.O.C./O.T.C. — out of control and off the chain.

I love their sound. Even the occasional missteps that happen in a live recording…I couldn't help but think, "This is THE FLYING PICKETS!". They demand that kind of respect because they are that good. There is an energy in their performances which resonates through the speakers. Without the aid of studio enhancements, they are going to put on a damn good show. Maybe not as good as a live House Jacks show like the ones captured on Drive, but a show you will not forget.

I love their originals. Guilty is simply a great song. There is a bit of pop cheese, but the song is solid in musicianship and arrangement and holds up to repeat listening.

I love their soloists. (Hate the fact that the liner notes don't tell you who is singing what part, nor who is featured on what song). Whoever's singing lead is fantastic on Billie Jean, Guilty, Moon Over Burbon Street, and As. But all of the tracks feature excellent soloists, infused with this vitality and character that has me in the palm of their hands. None of them simply sing, they perform. Hell, not to get too new age-y, a couple of times they become the songs. A spark touched me with each track.

You should buy the album if for no other reason than the fact that I love Only You. And if you have to ask why, you haven't been listening to pop a cappella for the last twenty years.