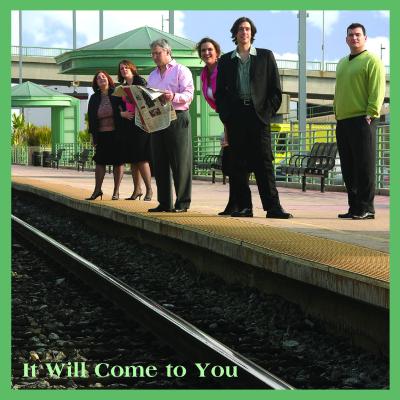 A sophomore slump is an unwelcome but nevertheless common occurrence in a vast majority of competitive and artistic arenas. When you have expectations to meet, finding complete success becomes an exponentially harder task to achieve. Sixth Wave cultivates a level of success with this album, but they also manage to fall short of expectations amid the strength of their previous release.

Sixth Wave's success starts with the arranging abilities of Gary Rosen. To be blunt: this guy has a magic pen and he ain't afraid to use it. Seamless transitions during the Earth, Wind, and Fire Medley, jaw-dropping voice leading and spacing during the modulation of You'll Always Remember the Song, and the playfully tight Twisted are just some of the highlights from Gary Rosen on this album.

That's not to say that all of the arrangements by Gary were first-class. I really question the jazz/swing adaptation in the William Tell Overture after such a spirited opening. I was reminded of the talents of groups like the Swingle Singers and Five Live just to be ambushed with a change that sounded more ... collegiate?

Vocally, Sixth Wave is still very strong. They are led by Gerald White, whom I feel is one of the most underappreciated soloists in professional a cappella today. This guy has some serious chops coupled with a very passionate delivery. The ladies of the Wave are as good as you're going to find, and Eric Bradley has such a keen grasp of a jazz bass feel that replacing him with anyone else would drastically change the sound and success of the group. The original songwriting on the album was good and bad, basically take it or leave it. I liked the vibe of It Will Come to You but I wanted it to take me somewhere else (ironic, eh?).

You see ... overall, this album is fine the way it is, but it's not anything special. The first time through, as well as during subsequent listens, I was reminded of all of the qualities that I loved from their first release that were now missing. Where is the forceful energy of "Grazin' in the Grass"? Where are the vocal extremes of "Cloudburst"? Where is the emotion of "Icarus" and the haunting smoothness of "Stay"? Across the board, this album sounds flat in comparison to their previous release. In a nutshell, Sixth Wave and this album fall victim to their past successes.

Hot damn, can Sixth Wave sing jazz. The last time a Sixth Wave CD came across my desk, my main complaint was that they didn't offer enough of it, spending unjustified time on pedestrian pop. I still want a full album of perfect tracks like the title tune, but It Will Come to You is quite close enough to make me happy.

I and the hairs on the back of my neck haven't quite recovered from the chords that ring through moments like the close of Twisted. They bring a jazz sensibility as they bounce on Oye Como Va and Swingle their way through a creditable William Tell Overture. I'd plead for a whole album with diva Cindy Bourquin on lead, except that I wouldn't want to miss Gary Rosen's conversational, make-it-sound-easy delivery, or Elin Carlson's wide-ranging power. A pitch bitch like myself couldn't help but fall in love with a group with the musical chops of Sixth Wave. Gabriel Mann does a predictably expert job in the studio, but credit for the fabulously unified singing goes straight to the group.

This time around, there was a couple of songs that didn't move me. I longed to hear Amy Fogerson bring her style to the kind of song it fits (think "Summertime"), but it doesn't work for me on Dream On. Steven Tyler's screams are indelibly printed all over this song; it's impossible not to hear this kind of version as a pale solution of Aerosmith dissolved in tap water. You'll Always Remember the Song, though perfectly performed, wallows in boy-band cheese. To my surprise, though, Earth Wind & Fire Medley rocks; my worries when I saw it on the set list were totally unfounded..

All in all, a terrific jazz album that will get a lot of spins in my Discman. Highly recommended.

I don't suffer from obsessive-compulsive disorder or anything of the sort — in fact, I'm pretty lax about almost everything when it comes to organization and the like. But from time to time, I suspect just about everyone tastes at least a little, tiny crumb of satisfaction upon realizing that one's thoughts and judgements make not only critical sense, but mathematical sense. You see, I got such satisfaction just now upon realizing that my scores for Sixth Wave's eclectic-to-the-third-power album, It Will Come to You, line up in a kind of three-way yin-yang-ish harmonious balance, that I felt compelled to mention it herein. You probably couldn't care less, but in the category headings, the scores shown are paired like Noah's Ark, with two "5"s, two "4"s, and two "3"s which average out crisply to an Overall "4." Further, the song scores amount to four "5"s, four "4"s, and four "3"s. So if you need proof that this album is "good," I've got the numbers to prove it.

Speaking of numbers, your first impression of Sixth Wave when you grab this disc (which you really should consider doing) is that, based on their album art, they could very well all be acountants, commuting to work via train (only it's business-casual Friday, but...Oops! Poor Amy didn't get that memo!). (Let's just say the artwork isn't going to lend itself to any "impulse buys" at Tower Records anytime soon.)

Fortunately, once you actually put the disc in and listen, very little about their singing is stiff, Type-A, or in any way bean-counter-esque. In fact, Sixth Wave grooves like the seasoned musical veterans that they are. The group swings, belts and croons its way through twelve tracks of vocal jazz (impeccable and quite convincing), original pop (remarkably poor), ballads (earnest, mostly), and classic rock (*eh*) on this disc. Of these twelve, as I mentioned earlier, the four receiving "5"s are utterly outstanding, with lively, creative arrangements with unique, thick dissonances, style out the wazoo, professional leads; they are truly worth the price of the album. Four are quite good, but lacking memorability or favorable comparison to the originals. Four are, sadly, unfit for public consumption, as this reviewer actually recoiled in agony as the volleys of artistically grating lyric-bombs were cast down upon his sensitive cranium.

The two best reasons to buy this album: The first is baritone Gary "AM Radio" Rosen, whose slightly grainy, old-time vocal tone is fun and idiosyncratic, in a way reminiscent of leading jazz vocalist Kurt Elling (in the sense that there's no mistaking either of these guys). Rosen's sound is the kind of tone that, while perhaps not what a typical vocal studies major would emulate, is unique enough to make Sixth Wave memorable, while simultaneously lending an air of authenticity to their Lambert, Hendricks, and Ross stylings on a great deal of this album. What's more, Ross wrote a number of the arrangements (including vocalese) that really make this disc shine. The second reason to buy this album is soprano Cindy Bourquin, who can nail R&B/pop stylings as convincingly as any of those American Idol, wannabe-Christina-Aguilera-types, and who can scat sing with the best of them. She's Whitney meets Ella, and it's awesome.

The strongest two reasons not to buy this album: The disc is bookended by two of the cheesiest original tunes you've heard since high school: It Will Come to You, and You'll Always Remember the Song. The gag-worthy lyrics ruin what seem to be otherwise semi-decent melodies and chord progressions. Sixth Wave should really think about sticking to other people's music. (Although, then there's the whole issue of the fourth track, which should be re-titled "Aerosmith: The Musical." OK, make that three reasons.)

Nonetheless, if you buy this disc, you will doubtlessly appreciate just how talented this group is. Likewise, you will be suprised at how well those individual talents coalesce. The six make a great team, like an a cappella version of the cast of "Friends." A smooth, rock-solid bass, a charismatic, raspy baritone, a powerful and tender tenor, two sultry and well-matched altos, and a diva-licious soprano may seem different on paper, and yet their ensemble sound really clicks.

Ultimately, it's still about the numbers. The bottom line is that this reviewer has four new tracks in his regular playlist, and that's pretty darn good.

This CD can be ordered from the group's website, from Mainely A Cappella, and from Primarily A Cappella.