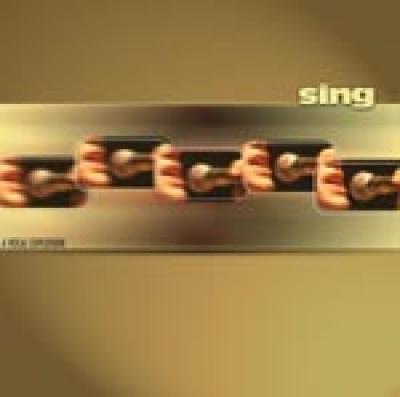 I like compilation albums, and this one's pretty good. It's not the absolute top of the a cappella world, but it's a fine cross-section and it should have pretty decent appeal. So what have we got? 16 tunes, half collegiate groups and half other a cappella. Da Vinci's Notebook sings one of their funniest songs ever at the end of the disc. On the front end, Katie Howell turns heads as best soloist from a group you've never heard of. Elon College Twisted Measure, ladies and gentlemen. Burlington, apparently not just for outlet malls.

Sorry, that was a North Carolina joke, but apropos. It gets into the reason for Sing, a poster child for a cappella in the Southeast. UNC grad Dave Sperandio is sick of everyone looking to Boston and San Francisco for their concentrated vocal band fix, so he's pounding the pavement to create a new epicenter. I'm all for it, except for the part where he's gone out of his way to alienate anyone who might remotely be accused of having ties to "the a cappella establishment", whatever that might be. Sorry, that was a cheap shot, but also apropos.

Politics aside, southern a cappella has a lot going for it, and Dave has produced a very nice collection. There's some great original work here, particularly Jon McLemore's McFerrinesque Don't Love Nobody. There are some great covers, like Katie Howell's aforementioned star turn on Strong Enough and the Duke Pitchforks' charming Rebecca, which is quite catchy as well as nicely named. There's even a great experiment, Dave Baumgartner's Spittin' Image VP freestyle, three minutes and 45 seconds that almost work except for a snare equivalent that sounds like a cartoonish bugsplat noise.

Now, Dave and I go back a long ways, given our mutual a cappella upbringing on the Southern school circuit. Way back in 1992 or therabouts, he picked me out of a (small) crowd and sang me a verse of Hey Jealousy, which at the time pleased me greatly. A few months back, I was sadder than most when he started throwing verbal grenades at the Contemporary A Cappella Society, our community's longtime stalwart champion and friend to all whether they know it or not. It encourages me greatly to see that Dave is now spending more time on music and less time on insults. Anyway, I like compilation albums. This one's pretty good.

Sing arrives as the first of a series of compilation albums to be released by the relatively recently-formed Alliance for A Cappella Initiatives (AACI) which is dedicated to showcasing the best in a cappella around the world, with a particular emphasis placed on pro and collegiate groups in the Southeastern US. And judging from this debut release, the organization is off to a promising start, with an album that holds its own against the other annual compilations we've all come to expect and eagerly anticipate.

Not unexpectedly, there are no clunkers to be found — since they were choosing only one number from a wide selection of groups, my guess is that Dave Sperandio and company could afford to be super-choosy. As a rule, the uptempos, with their seemingly more complex production, layered percussion, textured arrangements, etc., are stronger than the ballads, which tend toward being a bit plain and lacking in a certain sophistication and development in their arrangements. (Mind you, I recognize that creating an interesting arrangement for a ballad is truly a high art and not at all easy.) But we're talking about a very subtle difference in quality and it's a pretty minor quibble for an album that never fails to keep the listener interested from track to track

So I guess all that's left is for me to single out the best of the best (North Carolina lives up to its rep as a hotbed of top-notch collegiate a cappella) and perhaps that which falls a little short (not by much, but certain elements suffer by comparison when included in such auspicious company):

All in all, a very satisfying album. As a rule, compilation albums are generally safe choices, and this is no exception.

Sing is a feel-good album on a number of levels. A compilation of scholastic and professional tracks compiled by Dave Sperandio (aka "diovoce"), the disc showcases a bevy of great groups with a particular focus on stars of the Southeast. The lineup ranges from the established vanguard (e.g., UNC Loreleis and Clef Hangers, Duke Pitchforks) to a host of unfamiliar but great new additions to the fold. The playlist covers a good variety of tracks, from the requisite collegiate pop covers to pro group originals to the humor track and percussion freestyle that close the disc. To top it all off, profits from the CD support The A Cappella Fund, which provides scholarship opportunities for scholastic groups and their leaders. Good music and do-gooding at the same time — don't you feel just gooey inside?

Since the songs were all recorded and produced by different people, production varies a good deal. The academic groups feature a clean, sleek sound with a healthy dose of effects that seldom take center stage away from the singers themselves. This approach seems to especially jell with the male collegiate ranks; my favorite tracks (Kate and Rebecca) radiate a boyish earnestness through the speakers that lifts the best groups beyond the singing itself. Professional groups take a slightly slicker tack that works well with catchy songs like Heaven's Highest Hill and Rules.

Not all of the tracks are pure gold. A number of tuning blips appear here and there, and slightly overambitious solos get the best of a few singers (e.g., Stutter, Lose Control). The ballads also seem to stumble a bit more than the upbeat songs. But slight stumbles are the worst things you'll hear here, and a number of tracks are truly stellar.

Producer compilations from folks like Gabriel Mann and diovoce are a great way to sample the best of what's out there while avoiding the clunkers. Despite the many hands that helped make that makes for a smoother ride than you sometimes get with a disc like BOCA. While Sing may not be a perfect addition to your playlist, it'd be a damn good one.

Sing can be previewed and ordered at the Sing website, or by emailing dave@allforacappella.org.