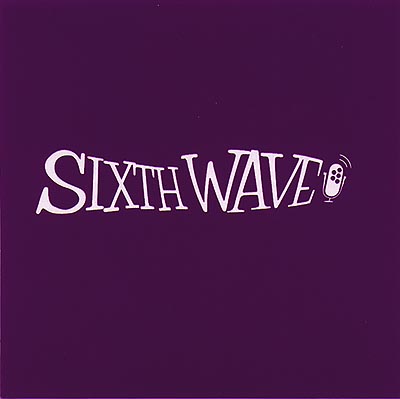 You know, reviewing albums is hard enough sometimes. You have to listen for so many different things on an album, and then you have to play the objectivity vs. subjectivity game. So just when I was beginning to feel that the albums were becoming harder to review, Sixth Wave has to go out and make it even harder by winning the 2001 National Harmony Sweepstakes. I have to write a review for the National Champions of a cappella?!? No pressure.

The big plus on this album is that it was recorded at Asylum Studios in Los Angeles and produced by Gabriel (Mann) Rutman. I'm not sure if Asylum Studios and Gabe only accept the very best to record with them, but they release album after album of top-notch a cappella. There isn't a production flaw on this album. Brilliant work.

The singing ain't so shabby either. Gerald White is smooth and deliberate on lead, and Eric Bradley is the new benchmark for solid basses in a vocal jazz setting. The majority of arrangements are so well done that it would take a talented musician many passes to hear everything and attempt to transcribe the arrangement. This is remarkable work from a very talented cast of vocal veterans.

What hurts Sixth Wave, in my opinion, is that their sound can become static on some tracks. Songs like Icarus, Blackbird, and Yesterday are all very nice to listen to, but don't get any more interesting after a couple of times through. Their standout tracks on this album, Grazin' in the Grass, Stay, and Vincent, are the essence of dynamic music, with different emotions every time through.

The cause of this, and the exact way to fix it, is very difficult to say. It could be the song choice, the arrangement, the energy in the presentation, or the recording session. I believe that most of Sixth Wave's problems with a static sound come from lack of energy in dull or monotonous parts. Background parts that match the solo line need to sing their parts in the same style as the soloist and match his/her feel. This is a problem that many groups would LOVE to have, and understandably, this is also an issue that is very subjective to the ears that are listening. Having problems like this shows how great this group truly is. They're so far past most groups that they can focus on the fine-tuning that most groups can only dream about.

Sixth Wave, Asylum Studios, National Champions. Is there really anything more to say?

2001 Harmony Sweepstakes champions Sixth Wave describe their first album as an opportunity to indulge their "unhealthy obsessions" with a variety of pop genres. I hope they've gotten that need out of their collective system.When Sixth Wave venture into pop, the result is technically admirable but often a little bland. When they return to their jazzy roots, the result is spine-tingling perfection.

There's nothing wrong with tracks like Grazin' in the Grass, unless you compare them to tracks like Gimme That Wine. Putting Sixth Wave on Pick Up the Pieces is like putting Michael Jordan on the track team. He can get the job done, but why waste specialized genius on something others can do better? From the very first chord of each jazz number, every member of Sixth Wave conveys the sense of utter comfort, the natural ease, that comes from hypertalented people doing what they do best.

Don't be fooled by the familiar titles on the track list. In Sixth Wave's capable hands, even early Beatles songs can be vocal jazz, and spectacular vocal jazz at that. Sixth Wave's rendition of arrangements like Tell Me Why will remind you why people say chords "lock".

The rhythmic unity among the women on Cloudburst deserves its own paragraph. Here it is.

Other than repertoire, my complaints are few. The stratospheric soprano occasionally gets a little carried away, sounding less like Mariah Carey and more like Flipper. Sixth Wave's creative take on Tell Me Why is counterbalanced by a boring, paint-by-numbers version of Yesterday.

Scoring this album was difficult because while there are several tracks that I could just as well live without, the best ones deserve the highest accolades. The bottom line is, I'm only making distinctions between quality and greatness. If you like vocal jazz, buy this album.

I hope Sixth Wave sticks around for a long time. Groups with such talented members often lose key people to solo projects. This lineup had been together for less than a year when the CD was recorded, and it's almost scary to think how good they could get in the future. A full CD of Sixth Wave jazz would be an instant classic. I can't wait to hear it.

Sixth Wave's self-titled debut album is a real delight, a nice blend of jazz and modern numbers ranging from The Beatles to Oingo Boingo (who would have thought?).

One of the perils of these five-to-eight-member jazz a cappella groups that have been springing up lately has been the same-ness of them all. Not so here, with some unusual picks. Stay takes us momentarily back to the eighties, and I have an urge to go tease my hair (no, not really, I'm lying). Icarus is beautifully haunting. Pick up the Pieces is a great funky scat number with some seventies groove that just screams disco ball.

Taki Rari was my favorite track. It's sort of bizarre, a cool Latin beat with a very impressive operatic solo overlay. It has me bopping in my chair right now as I type.

Sixth Wave is a very tidy group overall. There were a couple of small tuning errors, but they were few and far between, and there were so many good things going on that I forgave them instantly. Smooth sound, heaps of vocal energy, great voices, variety, with character and sense of humour shone through. If this is what they can achieve on their first album, then I can't wait to hear the next one!

To order, send a check for $18 (includes tax and shipping) to: