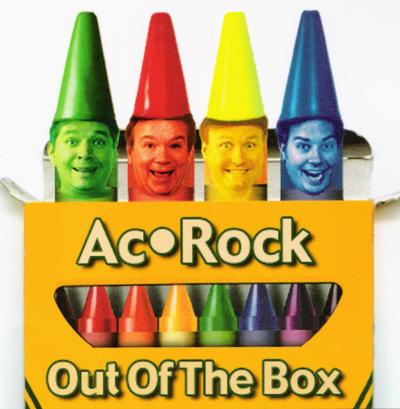 Ac-Rock's latest falls flatter than anything I've heard from them before. The tuning isn't as good, the songs aren't as interesting and the energy is lower. The good news is, this record is almost assuredly not aimed at me.

Right, then: the faithful at Bruning Elementary of Wilmington, Illinois, are going to approach this a lot differently than the RARB regulars. They may be more amused by a dozen-plus '50s retreads and other cheesy songs. They may not be revolted by MMMBop, the Hanson cover, which is not only irritating but woefully out of tune.

(This is the space where I should review the multimedia stuff. Sorry folks, I couldn't get it to work. If anyone's that curious I guess they'll have to buy one, and then they also can feel warm and fuzzy for supporting the band.)

Ac-Rock is clearly aware of its audience. The crayons on the front cover, the leaping-leaping-leaping photos of happy smiley singers in the liner notes all speak to a fairly savvy marketing effort. It's good to have steady work, and my hat goes off to the band for keeping itself together lo these many years. But Ac-Rock also has appealed to adults in the past. I went back and listened to UR What UR to see if it was as good as I remembered — yup, it is. The energy surges, the tuning locks and the 1970s repertoire comes alive. Any RARB readers looking for new tunes should go there, and leave Out Of The Box on the shelf.

The front and back covers of Ac-Rock's latest release, Out Of The Box, prepares you for what you're going to hear on the disc: they're a wholesome, high energy, and goofy a cappella quartet performing a predictable selection of oldies and ‘70s tunes, with a novelty track thrown in for good measure. If you're in the market for an inoffensive recording of the sort, Ac-Rock is your group. It's even an enhanced CD, with interactive group bios and some games. Simple fun.

Tight tuning and high energy are consistent throughout, and it's clear that these men enjoy what they are doing. These are important traits to have. The energy is often manifested in utter goofiness, which rarely appeals to me but definitely seems to go over well with the schoolchildren whose responses to their animal noises they imported for The Lion Sleeps Tonight.

The track list reminds me of the doo-wop group that used to perform outside at the Music Center in Los Angeles. With just a few exceptions, there are no surprises. You've got your doo-wop (including a "Best of Doo-Wop" medley) and your good harmony ‘70s tunes (including a Beach Boys cover). The opening two tracks were new to me, and there is an original tune written by bass Mark MacLean, Get Out The Way, which fits in with those two stylistically. There's a weird transition on the disc from "I Got You (I Feel Good)" which turns the backgrounds into "Blue Danube"; this would be more fun if they had left out the outtakes of the lead trying to scream like James Brown. The other surprise is the inclusion of MMMBop. I hope this one goes over well with the kids (do kids still remember Hanson?), because otherwise I can't find a way to justify keeping it on the album. I think the massive tuning issues are intentional as part of the parody, but the track is rather horrid, and just when you think it's over, they come back for another chorus.

While they provide little for the a cappella aficionado other than clean, good-natured nostalgia, Ac-Rock is good at providing that. I'm sure they are wonderful at schools and private functions, but if you're in the know and looking for something truly Out Of The Box, I'd look elsewhere.

Bursting from the gate with enthusiasm, Ac-Rock's Out Of The Box sprints its way through fifteen tracks consisting primarily of...overplayed doo-wop. There are a handful of more contemporary tracks thrown in for good measure. Most songs feature strong, confident leads, an unfortunate dearth of vocal percussion, true-to-the-original-version arrangements, and energy out the wazoo.

The album is an accurate reflection of its creators. Out Of The Box sounds like the work of four 40 year-old, fun-loving, kids-at-heart white dudes. The four do a decent job of mixing in a dash of goofy humor (spoken word interlude during Who Put the Bomp), noises (I laughed out loud following an unexpectedly loud snore in Lion Sleep Tonight), and the like.

The disc was engineered and produced by member Paul Iams, who thankfully works his Pro Tools unit like a kid with a new toy rather than a 40 year-old in a mid-life crisis. Iams includes snippets and outtakes from the recording process, which may annoy some, but show off a genuine playfulness and add lightheartedness to the disc. Most tracks are mixed very wet, and the individual voices are doubled and thickened, unlike a bare-bones barbershop recording. Overall, the sound harkens back to early Rockapella albums, only without the percussion.

Bright spots on the disc are a fun, tight Who Put The Bomp? a suprisingly authenic Lion Sleeps Tonight and a creative Little Deuce Coupe. Most songs invited less-than-favorable comparison to the original and were forgettable. The only legitimate clunker of the album is a painful rendition of MMMBop, granted, a horrible song to begin with, but made worse here with a weak solo and unnecessary extra chorus.

This disc has its enjoyable moments, but overall doesn't earn a strong recommedation. Ac-Rock demonstrates some strong vocal chops, and hopefully their next recording will see those skills applied to less anachronistic and overly-familiar material.