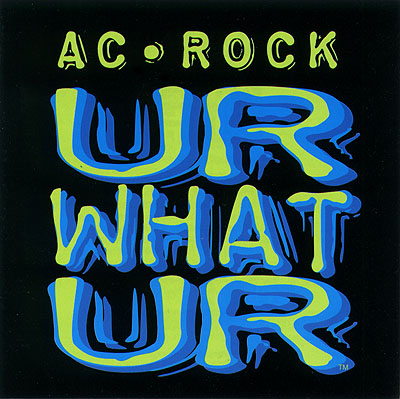 Wedding? Bar Mitzvah? Garden party? Hire AC Rock. They are peppy. Professional. Occasionally humorous, but not likely to offend your relatives. Lots of songs you'll recognize, and an album that makes them sound fun, friendly and reliable.

AC Rock is a lot like a really good golf player. Very few cliffhangers or exciting shots. Lots of nice play. No big screw-ups. Maybe not an advertiser's dream, but a real pleasure for the golf (or a cappella) enthusiast.

UR What UR is, on the surface, exactly what it claims to be. Four guys with decent voices singing clearly vocal renditions of their favorite tunes from the '70s, with a few '80s tunes for variety. The subversive thing is that it's actually pretty good. Excellent in places — namely a seven-singer splurge on Bohemian Rhapsody. Everywhere else, the tuning stays in a nice range between good and almost. The solos range from good to acceptable. And all the arrangements are decent, too.

Bohemian Rhapsody is AC Rock at the top of their game — dazzling not just for its highlights, but for its utter lack of detracting flaws. The whole song, done just as you've always wanted it, and just as every college arranger envisioned. Only nobody else has successfully navigated their way to such a thorough performance.

AC Rock knows their thing, and they are good at it. If these songs and this style are what you are looking for, you can trust them to deliver.

On their debut CD UR What UR, the boys in AC Rock are at their best when they realize that they're just a humble little four guy a cappella group. Simple but creative arrangements like Get Out Of My Cloud play to the strengths of the classic four man format. More Than Words sounded like a pathetic attempt to sound like real musicians when Extreme first performed it. But when AC Rock converts it to a cappella, it suddenly makes sense. The song's lack of sophistication suddenly becomes a virtue. Slowing down the rat-a-tat pace of Bob Dylan's Like A Rolling Stone to a slow crawl also allows for them create an arrangement that really wants you to hear the distinct sound of four guys singing. (And it also features a bass voice singing a relaxed and natural solo line or two — a rare treat nowadays.)

When they don't realize the limitations of the four part a cappella format, they run into big trouble. No amount of stereo panning or sound effects can save Bohemian Rhapsody. It's just a bad idea. The mock opera harmony sections worked as both rock and as humor in the Queen original because the goofy vocals were playing against some wonderfully bombastic guitar lines. When all you've got is the silly vocals, the result is just silly.

They have to learn that what gets laughs on stage isn't necessarily funny on disc. The otherwise enjoyable Break My Stride is hurt by a the-record-is-slowing-down effect. It hurts the integrity of the music. Similarly, the cleverly layered breakdown section of Get Off of My Cloud is hurt by some of the whining voices saying "It's 3:00 am! There's too much noise! Don't you people ever go to bed." Not especially funny, but it goes for a laugh, which is enough to distract from the song. (Although the same words work just fine in the stylized bass line.) Yes, it is funny (for a second) to say "Taco Bell" in Suite Judy Blue Eyes, but why do it if no joke was called for?

Overall, UR What UR will be an enjoyable listen for fans of The Trenchcoats or Throat Culture.

Looking for some good, fun a cappella music? Want some interesting versions of popular covers? Something that you can just kick back and enjoy? Then perhaps UR What UR by AC Rock is just what you need.

AC Rock is a four-man group from the Chicagoland area that has lots of fun performing all sorts of stuff a cappella. They do doo-wop, classic rock, '80s tunes...you name it. They make interesting arrangements of these songs. Sometimes they stick close to the original, sometimes they make something totally different out of it — like their slow, melancholy arrangement of the classic Bob Dylan tune Like a Rolling Stone. Or how about the really interesting take they do of Get Off Of My Cloud by the Rolling Stones. It does not get stupid and chanting like the original. They make it into a totally different song. These are all winners.

A couple of songs that are my favorites on this album are More Than Words and Bohemian Rhapsody. OK, now we all know that these are two songs that are really overdone in the a cappella realm, but I have to say that they do a good job on these songs. I usually get tired of More Than Words. It is full of simple harmonies, and sappy lyrics, and boy do I get tired of hearing weak versions of this song. AC Rock does a good job with this one, because they don't sound weak. They don't try to do something more (or something less) with the song than they should. They just focus on the harmonies and keep it simple. Just really well done. And then there is the cornerstone/benchmark song by Queen. Every a cappella group is compelled to try this one at some point in their career as (I think) a way of testing themselves. Well, AC Rock gets an A from me. Their version is interesting, it has some edge and bite, it moves, it sounds good. Well recorded and fun to listen to, it is the appropriate closer for this album.

I have to admit that I tend to like music that challenges me and makes me think about what they are doing and how they are doing it. But it was nice to listen to UR What UR and not have to think about it too much. It was fun and easily accessible. If you need something like that in your music collection (and you do), then I think UR What UR would be a good addition.

Oh my lord...a four man a cappella group!!! Do they even make these anymore? =)

One thing I can sense...the joy! They LOVE doing what they're doing..and it shines through on their performances. That's something that lacks sometimes in professional groups...things are so techno-processed, they forget that a lot of what makes a cappella work is the joy, the passion, that the singers bring to the table.

The tuning is very good...not perfect, but good enough to be considered professional quality...I would pay money to see them and not feel cheated. The arrangements vary from good reconsitutions of the originals for four voices to good arrangements for four voices, sometime resulting in very different versions of the songs (Get Off Of My Cloud being a very obvious example of this). Sometimes this works very well...I especially enjoyed the reworking of Like a Rolling Stone into a soul ballad (Dylan purists beware!!!).

The problems with my overall enjoyment of this album are the problems that unfortunately come with having only a four voice group: some songs are really just out of reach. Carry On Wayward Son was a prime example...without drums and a solid background to accompany the harmonies, it's just not...going...to work. =) And even with three extra voices on Bohemian Rhapsody, the lack of drums kills the original feel of the song, and reminded me a lot of the Leave It a cappella track on the Modern A Cappella album...just voices, with none of the substance of the original.

Now, that doesn't mean I don't recommend this album...I do. There's more good than bad, and the first track Suite Judy Blue Eyes doesn't suffer from the lack of background like Rhapsody did...in fact, it's the best track on the album. However, AC Rock does need to choose it's material better if it wants to continue as a four man group in an age where five has become the a cappella standard.

I have to admit to buying this CD a few years back when it was first advertised in Primarily Acappella...a top 20 CD at the time (I think), or one of those must-haves that Don Gooding advertised, I thought this was going to be a wild ride through. And, I also remember at the time, being somewhat disappointed and bored after listening to it maybe twice. Since then, I haven't seen the CD until it came time to review it. "Oh great," I thought, "not this one."

I said it before about another CD: stupid, stupid me.

I don't know what I was thinking a few years ago; maybe some random smoke from a mystery bong was traipsing through my dorm, I don't know. What I do know is that I was severely mistaken about the quality of this album.

This CD, recorded back in 1996, is a short and sweet tour through rock of the '60s to the '90s, with Beatles and Stones standing astride Extreme and Boston. And with only a four men to draw upon, the result is an extremely pleasing recording that never lets you get bored by what is presented. Except for one track, where I didn't appreciate the arrangement as much (Get Off of my Cloud), I found myself trying to join in at times.

The arrangements, not always faithful to the original tracks, are still engaging. Thankfully, in this day of showing off, they're lacking extraneous material, as is the whole CD. Check the track list; what you see is what you get — nine songs, around 31 minutes of music, and NO hidden tracks. I've said the same thing about the Rochester Yellowjackets and their attempts to give their audience what they paid for; AC Rock does it on the professional side.

Even on tracks that may seem to be overly standard-ish, there is life breathed into them, even on More Than Words, a song that tends to be the death of any a cappella CD.

So, my apologies for burying this CD when I first got it; I claim mad cow disease or whatever caused President Bush to leave his mark at the Japanese dinner...this CD is definitely worth purchase.