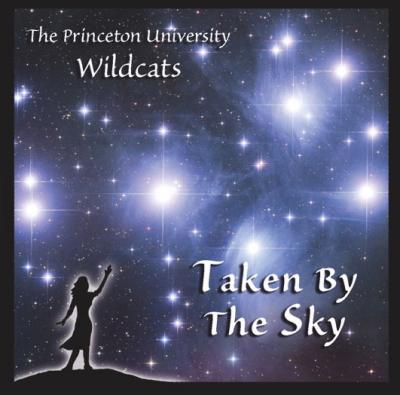 The Princeton University Wildcats are one mis-named group. The treble ensemble takes a decidedly tame approach to its mostly old-school repertoire on Taken by the Sky.

There's a wealth of problems here, but the biggest one is lack of guts. The album seems apologetic, as though the shy kittens in the group don't want to trouble the listeners. Both block and leads are cautious, with a breathy head voice sound. The members' love of singing just doesn't come through; I can't hear them having fun. Oddly enough, some tracks have the kind of tuning trouble I'd expect from a group that's over-excited (There Is No Arizona). The bottom line is that the fifty-minute disk feels a lot longer.

It's surprising to see how many of these arrangements were penned by ‘03 and ‘04 grads. For the most part, they're indistinguishable from the older arrangements that have been in The Wildcats' repertoire for ten to fifteen years. That's good news for the internal cohesion of the album, but bad news in that no tracks on the album reflect the progress that's occurred in treble vocal arranging since the group's founding in 1987. There's lots of over-reliance on 'doo' and 'ba', lots of simple three- and four-part harmony, lots of bass notes too low for the altos to nail. Some arrangements, such as Helplessly Hoping, are so simplistic that there's a ton of dead space. Oddly clipped, abrupt direction hampers other tracks (Stand By Me). Kitty Techno, a musical welcome to Princeton freshmen, just fails as a studio track. Honestly, I'd rather hear a live version, with all the freshmen laughing and cheering, than this lifeless repetition. I expected a medley of techno classics, but absent a quote or two, all we get is the same riff over and over and over and over.

The soloists bring decent voices and ears to the project, with nice soprano range and polite care, but most sound inexperienced. Control, breath support, and presentation issues hold them back. Kate Jensen stands out for trying to inject a little oomph into her lead. Tesla Monson-Cox brings a clear, strong tone that I enjoyed.

I don't think The Wildcats need to abandon their traditions and go in a VP-driven pop direction, but I do think they need to start taking more risks. On the next disk, Wildcats, show us your claws. Don't apologize for taking up my time or worry about getting it wrong. Sing like the love of your life just dumped you, like you just won the lottery, like you're the luckiest 19-year-olds in the world and you get four years to sing under the stars with your 12 best friends.

Taken By The Sky is the fourth offering from the all-female Princeton University Wildcats. Unfortunately, it leaves much to be desired.

The first problem with the album is the arrangements, which tend to be boring, static, and completely the same. For the most part, there are only "oos" and "aahs", with only a smattering of other syllables or moving lines in any part other than Alto 2. By about track six I was struck with how incredibly difficult it must have been to make this album. Both in rehearsal and in studio sessions, I was amazed at how much stamina it must have taken for these women to keep their lips pursed for so long. While somewhat effective on jazzier tunes such as Mood Indigo this style was much too low-energy and monotonous for a 50 minute album. The album started to bore me about 15 minutes into it. Taking the whole thing at once was tortuous. The arrangements obviously took no account of the energy, feel, and pulse of the original tracks.

Added to this lack of understanding in arranging is the lack of energy and feeling by the background singers. Everything sounds exactly the same, from classic rock tracks such as Long Train Running to ballads like Stay to country such as There Is No Arizona. I do complement The Wildcats for expanding their repertoire beyond the traditional all-female niche, but they need a clearer understanding of how to make different genres sound different. Their more traditional choral training simply overpowers the listener. For example, vowels are consistently elongated, as in I Want To Live Easy where "want" is pronounced more like "whont". While these are effective and necessary tools for the traditional canon of choral singing, it doesn't work for contemporary a cappella. There seems to be little feeling in the parts, almost no connection to the music, and certainly no connection to the listener. The exception to these statements is the clever and well-executed Kitty Techno, which sounds great. It shows spirit, fun, energy, and a vastly different style than previous tracks.

Finally, soloists are atrocious. The album opens with one of the worst offenders, whose singing is strained, nasal, forced, and completely emotionless. Yet these adjectives can be used to describe virtually all solos on the album. Soloists have poor breath support and sound neither good nor appropriate for their songs. Tunes with everyone singing lyrics in unison fare a little better, but fall prey to elongated vowel syndrome.

In short there is little good to say about this album. The tuning is acceptable but never truly rings. Percussion, when there is any, generally contributes little. And there are the above mentioned problems with arranging, energy, and soloists.

I think the first thing The Wildcats need to do is loosen up, have some fun, and just sing a little more. If the group can capture the feel of the last song throughout an entire album, it will be halfway there.

About the most memorable and exciting aspect to The Princeton University Wildcats' Taken by the Sky is the sound of "Whee!". This high-pitched, whizzing noise apparently was considered a valuable and appropriate vocal percussion noise on track two, I Can't Dance (Genesis). "Whee!" aside, unfortunately, the rest of the album is a compilation of plodding, insipid, lifeless cover songs, each of which epitomizes collegiate a cappella at its saddest peak of mediocrity.

Discerning a cappella listeners are aware of the significant advances made by various female collegiate groups in the last few years — e.g. better arrangements, more sophisticated, professional recordings, elaborate and well-executed vocal percussion, etc. This album indicates a thorough ignorance of such developments on the part of its creators. The arrangements are dull, highly repetitive, and fail to create passionate moments. The recording itself is thin and tinny. Most tracks that would have benefitted greatly from the energy boost that vocal percussion can supply (Long Train Running, for example), simply do not have any to critque. And when there is vocal percussion, it's occasionally silly ("Whee!"), old-fashioned, and mixed too far into the back.

I feel the need to mention the final track, which is, with no exaggeration, The Worst A Cappella Track I Have Ever Heard. Kitty Techno features some painfully unfunny and witless collegiate-humor narrative combined with feline-related puns, plus various dance-groove hooks inserted limply inbetween. I presume it's intended to be a quasi-recruiting tool for freshman female auditionees. It probably would turn more folks off to the group than on, I suspect.

The album is fairly well-tuned and there are a few nice blending moments. However, there is not enough interesting music or charisma for a higher score.

To order a copy of this album, please send an email to wildcats@princeton.edu or visit the group's website.