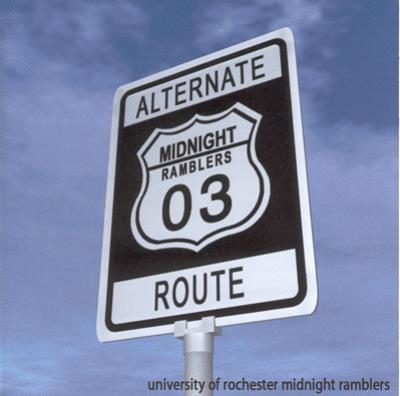 The University of Rochester Midnight Ramblers just barely make the bar to average scores across the board. Their arrangements are plagued by awkward, distracting backup syllables and overly imitative leads which make nearly every song on the CD sound like the Ramblers are only pretending to sing their songs rather than actually committing. The result is not amusical, nor does it lack showmanship, but it is often inartistic. As a result I did not enjoy Alternate Route.

Yes, sometimes distracting back-ups are what collegiate a cappella is all about. But not here. Unlike The Binghamton Crosby's, the Ramblers' distracting backups do not contain enough cleverness to make the distraction worthwhile. A possible exception is Army, where the cleverness is upped a notch, and the song is served rather than hindered by irreverence. If a group is going to arrange this way, it must make those syllables count.

Shut De Phone is a perfect example of efforts wasted. The well-known choral spiritual "Shut De Door" is rewritten with intended comic effect, but the joke is mild, obvious after a single chorus, and the remainder of the song is completely pointless. It's a waste of a track, but it is sung well enough to keep the scores out of the doghouse.

Only Nothing Man is delivered with true commitment. But one strong lead is not enough to carry the CD. Alternate Route is only a yearbook for its singers, but it's one to skip for those not already fans.

On the third album to cross my desk, The Rochester Midnight Ramblers are still hovering just above average. The disk is fine. It's solid. It's pretty good. But it's a whole lot like a lot of other albums, including others from this group.

A few positive attributes do stand out. Soloists Andrew Frueh and Dan Gross bring an appropriate rough edge to their multiple appearances. I appreciated the guys' willingness to take on the nerve-wracking challenge of covering KISS, as well as branch out a bit with Man of Constant Sorrow. Energy, especially block energy, is the group's greatest strength. Tom Kraus pulls off Minnie the Moocher without completely ripping off Cab Calloway.

However, for every success, there are just as many missteps. I bet Shut De Phone gets a big laugh as the opener for a live set, but the rendition here is painfully wooden. Army has pitchy moments. VP is mostly pretty basic. Some arrangements drag on too long (Waste). The production adds very little. And I have to admit that I could have lived without the Tom Jones impersonation; it's bad enough to endure him on commercials.

My advice to The Ramblers is to stick to it. They have the fundamentals down and just need to keep polishing.

Alternate Route by the Midnight Ramblers is actually a good album. Excuse the pun, but the group has definitely changed courses from past albums.

The musicality is much stronger than on previous efforts, though there are definite areas for improvement. Any deviation from standard chord-building, and you can actually feel the nervousness of the singers come through the speakers. Army was the worst culprit, as more often than not, I was afraid that a voice was going to stop and yell: "What note are we supposed to sing here?". That's a shame since the song starts out strong but falters on the transitions between the verses.

A direct comparison to my last review of the Ramblers: the group sounds really young. Breath support wavers, phrasing can be haphazard, the dynamic palette is limited, and both soloists and the block tend to be nasal.

They've strengthened each of these areas dramatically: control is carried over most phrases, there are some nice moments of soft passages to counteract the relentless driving passages. And fortunately, the nasality is relegated to the delightful Man of Constant Sorrow for the most part.

Even the digitizing is gone. What you have on this album which should make the purer among us more happy seems to be all MR, all the time. Maybe some auto-tuning here and there, but nothing covering up their sound. And that's good and bad.

They still aren't the world's greatest singers, but they are pursuing that goal with a passion. Since this is a recording by the 2002-2003 group, I'd love to hear how far they've come now.

Arrangements are still where they have the most fun. There are no dazzling intricate patterns that have become de rigeur in a lot of the most stellar work, but the overlay of lyrics as background syllables for just straight ahead camp is spot on. And instead of creating cluttered messes, this time around those words add an appeal to the songs.

The opening of It's Not Unusual is fantastic, while the whole song suffers from shaky tuning in a lot of places. The schmaltzy decision to use "Tom Jones" as a rhythmic motif struck my cheese need in just the right place. And the machismo of the soloist was the perfect compliment.

Two Points for Honesty and Nothing Man are the standouts on this album, each deserving a wide distribution among a cappellaheads. The closing track on the other hand is cringe-worthy.

I'm not a fence-sitter on this album, it's definitely a pretty average album, but that's not a put down to the guys. They've worked hard on making a solid album. It's just not going to win any awards in this day and age, but not everyone needs to.

For ordering information visit the group's website or email ramblers@mail.rochester.edu.