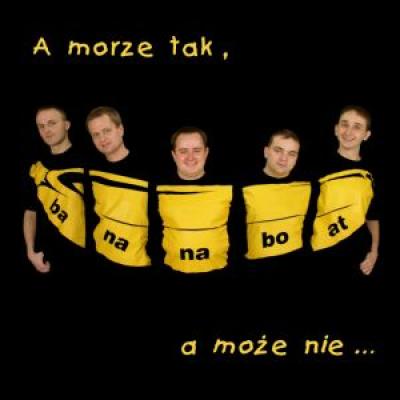 "Synchro" of Banana Boat emailed RARB before submitting the group's album to ask, "Do people in America like sea shanties?". Who doesn't like a lusty chorus, a bawdy phrase, a catchy, rowdy melody? One needs merely to look at the success of movies like "Pirates of the Caribbean" and Charleton Heston's "Treasure Island" (a personal favorite of mine) to see that Americans love a good yard armin' and keel haulin'. And let's not forget National Talk Like a Pirate Day!

I find nothing more fun than a rowdily sung, cockneyed chorus damning cheap rum, faithless women, and the British navy. I also find nothing more stirring than a vodka-swilling, cigar-smoking men's chorus singing Russian hymns. Figuring that pirate song from behind the Iron Curtain is the best of both worlds, I did my best to convince Synchro that submitting his album was a great idea, second only to razing the mizzen mast with a volley amidships.

Then I got the album. It has five guys on the cover. Arms linked behind each other's backs, they're all smiling. Are they smiling because they're all wearing black tee shirts with yellow segments that, when worn in precise order, comprise a ten foot long banana? Could be. Not an eye patch, peg leg, or cutlass in sight. What the heck kinda' pirates are these!?

And why is my intro to this review longer than a smoothbore flintlock? A morze tak, a moze nie... is similarly light-hearted and fun, with unexpected, charming quirks, piratical melodies, and a language that sounds vaguely Russian to the unaccustomed ear. Will you enjoy the album? Of course you will, it's sea shanties. "Sea" above for reasoning.

There are, however, stormy seas to every great sailing "Endeavor". I would criticize the album's production. The mixing has been done well, but not every buccaneer should take the same tack.

The album's balance and eq are warmly mixed, with plenty of bottom end. The bass, whose swarthy, rumbling voice ushers in the first track, does not dominate the mix so much as center the group's tone on an even keel. The original human signal is audible, but the bass is very obviously octavized on several tracks (especially boomy on Orabajo).

There is a strange effect applied to all parts but the soloists. Lots of reverb and chorus or compression wash over the vocals, most noticeably on the lower voices. The result is creamy smooth blend, but the effect colors the voices into an artificial, harmonium or sometimes bagpipe-ish tone.

Further swabbing the deck, the group's enunciation, sibilant timing, and entrances/cutoffs are perfect. Even the tongue trills on Polish "r"s are consistent (Z portu dalej). It's awe-inspiring.

Rather than overdubbing the voices for "crowd effect" and playing up the human side of the music that kept grimy pirates and duty-bound navy men occupied through hours of grueling deckwork, Banana Boat has chosen instead to run a spotlessly tight ship, clean as a stainless steel bosun's whistle. The mental image is firmly of five guys in a European studio, not fifty rapscallions leering and jeering from the poop deck.

The good news is that the guys haven't lost sight of the fun of it all! Soloists sing with infectious energy, making me smile through Polish phrases I don't begin to comprehend. Banana Boat is loaded with gusto. The pronunciation of the album's two English songs, Day-oh! (Banana Boat Song) and Round the Bay of Mexico, is a little off. But the rhythms are bouncy, and I swear the accents add to the fun.

If you enjoy pirates, sea shanties or Russian hymns, Banana Boat will put a grin on your blacktoothed visage and a bounce in your scurvy, landlubbin' step.

Banana Boat, an all-male vocal quintet from Poland, enters the fray of recorded a cappella music with a formidable debut album, A morze tak, a moze nie.... This collection of 16 tracks surveys traditional and contemporary nautical folk tunes of Poland, with a few American tunes thrown in for good measure. A jubilant recording, it was a true pleasure to review.

You might be thinking, "Hmm... Polish sea chanties... sounds like a... blast?" Yet despite the fact that the vast majority of the album and all the liner notes are in Polish, it is immediately accessible to the American listener. Because the tunes are based on centuries of Western music tradition, and sung with an infectious energy, it doesn't matter that I had no idea what was being said. The singers' personal involvement in the music and appropriate interpretations will transport the listener to the deck of a schooner cruising the seas.

Musically, this quintet is solid. Tuning is excellent, which is a delightful surprise when one takes into account how freely many of the parts are sung. Production is also solid. Passages auto-tuned into synth-like qualities are tempered with throaty vocals, effects are used sparingly but effectively, parts are mixed with great balance, and decent use of stereo is used. Despite the fact that it's not truly a cappella, a nice addition is made on several numbers with an intro or outro of waves batting against the hull of a boat, or a blowing wind, setting the mood perfectly.

The true joy in this album comes from the energy of the singers. These folk tunes come from a tradition that was never meant to be publicly performed or recorded. These simple work songs were sung on deck to get through the sometimes tiresome and monotonous voyages at sea, and Banana Boat captures this with aplomb. The interpretations are wonderful, with a heavy emphasis on beats one and three, typical of folk melodies. Its clear the group does not take themselves too seriously, from their comic shouts in the middle of their songs to their hysterical outfits (see album cover). They sound like they have great glee, particularly the soloists. The group having cut its teeth actually performing aboard ships, it takes little imagination for the listener to be transported far from the confines of his living room. It's just fun to listen to.

This album is an excellent study in the importance of energy and enthusiasm in recording. Even with the best producers, most expensive equipment, and an unlimited budget, a technically perfect album will mean nothing if you don't sing with your heart in the music. Banana Boat's enthusiasm more than makes up for the simple and repetitive repertoire. I will take a fun album over a stale sound any day.

In sum, this album should be considered well beyond the niche of Polish sea-chanty fans. Its energy and music transcends language barriers and will touch any music fan.

Banana Boat is not just a group; they are a sub-sub-genre unto themselves. If you go to your local record shop you probably won't see a "Polish Sea-Chanty A Cappella" section anyhwere. If you do happen to see it, it's pretty much guaranteed that Banana Boat's A morze tak, a moze nie... will be the only album in it. Yes, that's right. It's sung in Polish. It's a cappella. It's primarily sea-songs and sea-chanties. And in many ways, it's quite good.

What is most impressive and, simultaneously, most problematic about Banana Boat's recording is the consistent power of its group sound. The singing is exclusively manly and eschews subtlety at every turn, preferring instead to showcase a close-miked, voluminous sound on just about every song — like a barbershop quartet on steroids. Unsurprisingly, this is accomplished by utilizing a homophonic, coherent approach to the rhythms in the arrangements. The group's style (or should I say the sub-sub-genre's style?) seems to rely on thick, beefy chords, most of which contain a noticeable, additional low note. Some chords go so far as to include only fifths and octaves. For you guitar players out there, you've never heard a vocal group pull off the equivalent of Nirvana-esque "power chords" quite like this (without effects, I might add). Some chords ring so big and so cleanly you forget you're listening to voices, seeming instead like an accordion or a fleet of bagpipes.

And yet, as wonderful and praise-worthy as Banana Boat's sound may be, taken as a whole, the album suffers from an unfortunate sameness. One could appreciate the loudness and strength in this music if it were more often interspersed with quiet moments. The intensity of the sound is so consistent throughout as to nearly become meaningless. Granted, the style of music being performed here may not be perfectly conducive to such contrasts. After all, these are relatively brief, repetitive songs for the most part, meant to be easily-remembered (or so it would seem). That's fine, but for this reviewer it was the album's primary drawback. Fittingly, the highest individual track scores were given to the tunes with the widest dynamics and that went beyond homogeneity in the arrangements.

Speaking of highlights, one tune in particular, Arktyka, is unusually captivating. According to member Pawel Jedrzejko, the song is a "love song dedicated to the most cruel of all women: the White Lady of the North, Lady Arctic." This track comes alive in particular — haunting and beautiful. Although it makes for a great listen on its own, it would be especially appropriate for a film or soundtrack.

Banana Boat has carved out a happy little niche for itself. Despite a lack of apparent competition in their sub-sub-genre, the guys are clearly pushing and challenging themselves in order to make the most of their unique and specific repertoire. Although not an elite work, A morze tak, a moze nie... is a recommended purchase.

To order online, please visit the Banana Boat online store or contact the group via email.