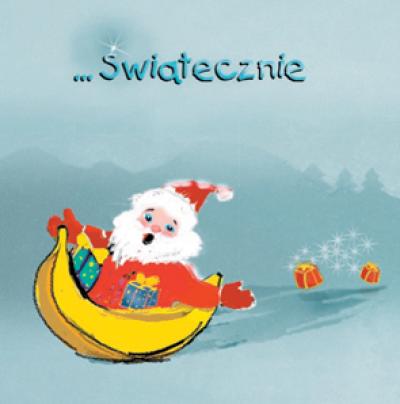 What's the logical follow-up to an album of Polish sea chanties? Why, a Christmas album of course!

So thought the five energetic men of Banana Boat, though album is a bit of a stretch — Swiaztecznie is a 6-song, 12-minute mini-album that despite its unbounded enthusiasm isn't likely to be playing as background music at this year's holiday party.

Much of the technical precision exhibited on the group's first album — the rich blend, powerful solos, ensemble diction and skilled production — is duplicated here, but the sameness of the material, arrangements and lack of a certain sensitivity to the music itself is what ultimately drags the music down.

Without professing to be any sort of expert in Christmas carols (oy, if my mother heard me now), I can say that were these gents to show up at my door on Christmas Eve, I would probably ask them to leave, or at least "quiet down!" after a song or two. So seemingly joyous and excited by the music are they, that dynamics and nuance are essentially ignored. Especially with Christmas carols, where the primary structure is solo verse-ensemble chorus-solo verse-ensemble chorus, there must be some attention to the sweetness that typifies their melodies. These gentlemen still seem to be in sea-chanty mode, with everything sung as lustily as if they were still swabbing the decks on the S.S. Whatever.

With centuries-old and well-known melodies, I suppose it's hard to fault the arrangements for a lack of creativity but those fashioned by Tomasz Czarny and Antonina Szybowska for this album very rarely show development beyond the initial verse and chorus. As such, on what is already a short album, really only the first 45 seconds of each song is remotely engaging, with the rest being a rehash of what has already been heard. In a few cases, even that first 45 seconds is uninspiring (as in the case of an all-too-basic Deck the Halls) or borderline "wrong" — a term I hesitate to use since it's not entirely fair when it comes to interpretive arranging but one that seems apropos of Joy to the World. This track features several chord changes (or lack thereof) that seem like attempts at jazz but are heard (at least by me) as just plain incorrect, or at least bizarre.

Don't get me wrong: these guys are talented singers and that they love to just sing their guts out is amply evident here. Temper that enthusiasm just a smidge, throw in a little more artistry and some more varied material, and that's an album I'll be eager to hear.

From sea chanties to Santa Claus? What will those wacky Banana Boat guys sing about next? Well, as it turns out, there is, in fact, a connection.

St. Nicholas is the patron saint of sailors. Banana Boat. Poland, a country of avid sailors. Ahhh, now all becomes clear. According to legend, St. Nicholas performed not one but two miracles — on the same trip! Good ole Sinterklaas allegedly calmed a storm at sea and restored a sailor's life while on a voyage to the Holy Land. And he gives gifts to millions of kids every year! Pretty nice guy!

So we see why Banana Boat might enjoy singing Christmas carols.

Though …Swiatecznie oozes much of the same excellence permeating A morze tak, a moze nie…, there is something lost in translation. As I noted in my review of Banana Boat's previous album, everyone loves sea shanties. The melodies are catchy, the singing lusty, and the general intent and mood are all too clear, despite the shaky relationship between Polish and English.

…Swiatecznie, however, is two-thirds traditional Polish Christmas fare. These songs feel chamber choirish (Gaudete is well reverbed and sung in Latin), and the arrangements are a great deal more complex and counterpointed than previous piratical fare. However, you don't know them. You've never heard them before, and you're never likely to hear them unless you a) go to Poland in December or b) buy this album. Most Americans would agree, I think, that half the joy (and pain, really) of Christmas carols is the nostalgia of knowing them all by heart.

Which is part of the problem with the two English songs, Joy to the World and Deck the Halls. American caroling purists might object to Polishly accented versions of these songs (though we can only "claim" Deck the Halls as our own — leave it to Americans to write entire choruses with only three letters "f a l"). Banana Boat's Joy to the World is thickly accented, with a few words almost unintelligible. There is a very odd line and harmony to "makes the nations prove" that made me cock my head quizzically each time it appeared. The cutoffs and pronunciation on this track are not as clean as the rest of the album, nor nearly as clean as the Swiss precision of A morze tak, a moze nie…. Deck the Halls is better, and the arrangement is pure fun. Verses are straightforward, but the choruses play with a very singable "fa la la" concept that I've never heard before. The Polish accents are better here, too.

The feel of the album is similar to A morze tak, a moze nie…. Banana Boat sings with its trademark energy, carrying over its piratical heartiness. There is that blendy harmonium sound, which, when applied to Christmas songs, reminds me strangely of Mannheim Steamroller. The bass is generally inhumanly low and warmly eq'ed. The arrangements are sophisticated.

Should you buy it? Wait for the exchange rate to tip far in our favor. The album is musically great, but since it's a very short album of tracks that are traditional to Poland, sung in Polish, Steamrollered, and a cappella, the album is a little too nichey for my nostalgic Christmas tastes.

Swiatecznie is the second release for Banana Boat, a five-member all-male group from Poland. More of an EP than a full album, this Christmas CD offers six tracks. Unfortunately none of the elements measure up to the group's first full-length (and recently reviewed) release, A morze tak, a moze nie....

A morze tak, a moze nie... was a compelling album because of the raw energy of the tracks. The singers had a mastery of the material, traditional maritime songs in the folk tradition. It's obvious that Banana Boat isn't as comfortable with Christmas fare.

Gaudete, a track in a more folk-song tradition, is well presented and by far the best track on the album. With block harmonies and a well-chanted lead line, Banana Boat exploits the strong beats and traditional harmonies, in particular making the most of the hemiolas.

Other tracks simply aren't compelling. The opener, while essentially in tune and presented without error, is just plan boring. Joy to the World sounds like poorly executed Mannheim Steamroller, completely eschewing traditional harmonies, and Deck the Hall could be off any number of forgettable American pop stars' Christmas albums; unfortunately this isn't successful either. Other tracks are decent but not exceptional.

Overall, the album just seems a little sloppy, with often weak arrangements, disjointed cutoffs, and lazy engineering with too much Auto-Tune. None of the deep-throated, joyous wailing that made their first album such a pleasure to listen to is present.

All too often Christmas albums are an opportunity for an otherwise noteworthy group to produce a mediocre disc, and this is no exception. I look forward to hearing more traditional fare from this group.