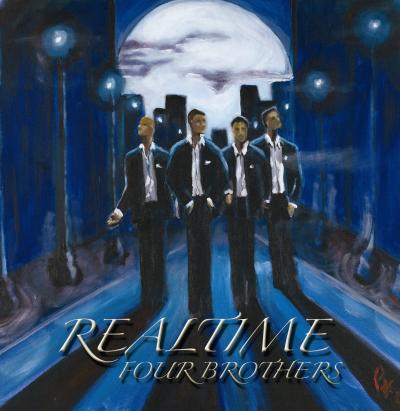 Despite the insistence of their liner notes that they sing "a wide variety of purely vocal music, from contemporary a cappella to barbershop and everything in between", Realtime is a barbershop quartet, plain and simple — or at least that's all I can think after listening to their first album, the accomplished and promising, if a bit tedious and boring, Four Brothers.

Some have complained over the years that RARB reviews are colored by a reviewer's distaste for a particular type of music. So let me come out and say this: I don't love barbershop, and I don't hate it. I like to think that if it's done well and creatively — within the confines of the style — I can certainly appreciate it for what it is and find positive things to say.

So with that in mind, it seems to me that Realtime's debut album is a 50/50 split. Technically, these boys are gifted barbershop singers, with generally solid pitch, soaring ranges in the top two tenors, and the right sort of ringing blend overall that is required for this form of a cappella. If there is a quibble on the technical side, it's the noticeable lack of a true bass presence. Not so much that Tom Metzger doesn't have the notes down there — he does — but the arrangements presented here give him very few opportunities to showcase his resonant bass and a too-treble-y (even for barbershop), at times even shrill sound, often results.

But artistically speaking, this album didn't do it for me — perhaps, more than for any other single reason, because of a rampant ignorance of dynamic variation. But for a few exceptions, these guys are planted firmly somewhere between the lands of mezzo-forte and forte with nary a pianissimo in sight. Barbershop, at least as rendered by these gentlemen, is saddled with certain inherent limitations in how differently one jazz standard can be presented from another, so at the very least, I would have appreciated some experimentation with dynamics (and/or tempos and/or anything else) to keep things interesting.

And frankly, overall, a vast majority of this album has a certain same-ness about it — with the exception of a pretty Loch Lomond and an energetic, quirky, inventive Keep Your Sunny Side Up, once you've heard one tract, you've pretty much heard them all. Track after track goes by and there's no question that these guys are good at what they do, but the songs begin to blend together, and there isn't anything terribly compelling or intriguing going on to make you want to come back and revisit this CD.

Cynics and doubters will just say I hate barbershop, but that's simply not true. It's fun, lively, and unquestionably some of the most difficult music to sing. And the gents of Realtime sing it well — they just need to mix it up a bit, and maybe they'll achieve that "wide variety" to which they seem to aspire.

Realtime, a group of four men who are not related despite the disc's title, makes a decent start with its first recording, Four Brothers. Although the group has amassed impressive live recording awards since its recent inception, the album is simply mediocre.

Despite a generally professional sound, the album could use some work. Tuning is OK. Cadences truly ring; I would like to see Realtime extend this perfect intonation throughout the album. The problem is that the inner voices simply aren't at the same skill level as the top and bottom. With a weaker timbre and airy unfocused tone it will be difficult to achieve perfect tuning unless this quartet undertakes some major mechanical changes. This is especially true during unisons like Come Fly With Me. It Was A Very Good Year was so out of tune it made me cringe. Dissonances are also a problem. Jazzier numbers, such as The Birth Of The Blues, find members singing notes simply close to each other, not perfect whole or half steps. To be effective, dissonances must be perfectly in tune.

Another problem, a particular pet peeve of mine, is the singers closing to final "r"s too quickly. This is especially bothersome at cadences. Its impossible to sound good while singing "rrr" (or morphing slowly to "rrr").

The biggest problem, however, is the general boringness of the album. Dynamics are fairly non-existent. There is little flair on the songs, and they all sound essentially the same. It is very difficult to listen to the album all the way through. Arrangements are mostly similar, and the songs blend into an album of monotony.

Despite this lack of energy and finesse, the one tune where some spirit is injected, Loch Lomond, has an opening that sounds more like American Idol than traditional Scottish melodies. The inappropriate beginning notwithstanding, this is by far the best track on the CD. The fresh arrangement and more traditional harmonies provide a welcome respite from the mostly barbershop and jazz feel the rest of the songs have, and the clearly articulated parts and innovative rhythms make the song a winner.

This isn't a bad album. It's just a boring one that has its moments. Tom Metzger delivers stand up performances throughout the album. With excellent scatting, and a rich yet focused tone, he clearly leads the group. The album also opens with a real zinger, When The Saints Go Marching In. Of all the tracks it is the most in tune and a true pleasure to listen to.

In general, Realtime needs to capture the essence that has won them so many live awards to the studio. On recordings, mics capture and amplify every imperfection, and a charismatic performance won't mask the wrong notes. With more energy and more prep work, the next album could be a real winner.

An accomplished group of four men representing three countries (US, Canada, Australia), Realtime has put out a pleasant and relatively benign album in Four Brothers. Attention to blend and energy makes this barbershop album a winner with classic four-part tunes (I've Got A Gal In Kalamazoo), American standards (Come Fly With Me), and even a Broadway cover (Everything's Coming Up Roses).

Admittedly, I was hesitant to receive my first barbershop album to review. There I was, poised and ready to criticize every audible flaw like tuning, breathing, cutoffs, and diction, not to mention what I expected would be a corny collection of silly songs. Thankfully, I don't have much negative commentary in that area, if any at all. Every note and chord is crisp, no one person unintentionally stands out above the others, and even the vocal slides move from tight chords to more open ones with remarkable precision. The men of Realtime perform each of the songs with emotion and meaning appropriate to the music. They also hold out the seemingly impossible long tags at the end of many tracks with great clarity and a steady breath

It's truly no wonder that Realtime received an 8,000-person standing ovation from barbershop fans at the 2004 international SPEBSQSA competition. So despite my uncertainty in reviewing barbershop, I definitely got the impression that Realtime is tops in its genre. There's nothing corny or typical about this album; these guys are serious about their music. And while Four Brothers didn't turn me into an ardent barbershop fan, I certainly have more respect for this underappreciated type of a cappella.