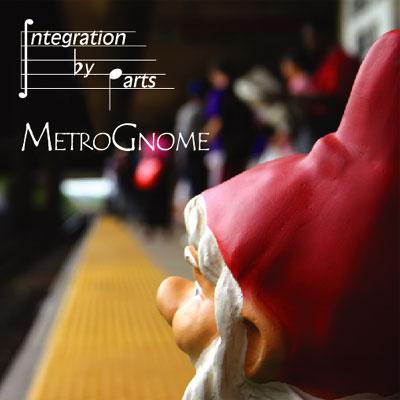 MetroGnome is the first release from the recently formed co-ed group Integration By Parts, a six voice ensemble from the Boston area. Unfortunately, there is no way around a negative description of the CD; it just isn't good.

Tuning across the board is awful. There is more than enough support from bass Alderson, and he lays down a tonally-consistent foundation in almost every track. The other three parts cannot build on this, however. Chords are sloppy, with very little effort put into them. In particular, intervals are not consistent. Axel F (Theme From Beverly Hills Cop) will illustrate the difference between the bass and upper parts. While Alderson comes backs to the same tonic every time through his difficult and repetitive riff, the opening woman's part never lands back solidly; with each interval a little too high or too low and pitches not consistent. The worst offender is More Than a Feeling, which features unintended modulations rippling through the parts right before the chorus and atrocious tuning throughout.

Voices also have a problem with blending. As said above, Alderson proves able, but the other two male voices are weak, almost timid sounding. The women fare far worse however. The mix of a soulful, sultry alto, a straight-through-the-nose Broadway mezzo, and a flakey soprano with almost comic vibrato is a disaster. The voices simply can't blend. None of the women ever give an inch in their individual styles and interpretations for a sense of ensemble. The one exception is Lois Lane, where Schneyer and Baraff at least attempt to complement one another. Soloists are below average. Simpson offers the poorest tracks with California Dreamin' and In the Air Tonight, but none of the other singers gives a standout performance. Arranging is generally okay, but poor arrangements and choices of syllables lack the feel of the originals. Often the extremely elaborate syllables can add flavor and energy to a song, such as Lois Lane, but more often they become distracting and seem difficult to sing, as in Spiderman Theme. The arrangements often do not reflect the feel of the original. California Dreamin' becomes an upbeat dance hit while More Than a Feeling loses all its rocking and energy through beautifully sung but inappropriate "doos" featured during the track.

Production is amateurish. A good studio and experienced engineer might have been able to smooth out these problems, particularly the blend, but voices are presented with little enhancement or alteration. Percussion is decent, but covered by poor background parts.

In sum, there is little good about this album. All elements are below average, and taken together it makes for a poor listening experience. This group will need lots of practice and a steady hand in the studio to produce a decent effort next time.

Integration by Parts' MetroGnome comes in first in a number of dubious-honor categories: first disc to cause physical pain; first album to inspire this reviewer to go back and look at all the albums he's previously reviewed, simply to ensure that all the other ones were better; first album to receive an overall score of "1" from this reviewer.

Simply as a recorded work, MetroGnome fails to meet some basic criteria for a decent recording. The production quality is... well, "quality" is not the right word. Backing voices pop out too loud one moment, too soft the next. Often, the backing voices are so quiet as to be indiscernable. Soloists' levels peak and distort sporadically while others are inexplicably quiet. There is little to no bass presence throughout. Purposeful EQ? Compression? Neither seems to exist on this disc. The album is reminiscent of tapes made by my well-meaning high school rock band. We put a RadioShack tape recorder on the floor and hit "record." Somehow, in all our well-meaningfulness, we thought selling copies of the tape would be a successful endeavor. We were naive, but again, well-meaning. Likewise, I am sure that Integration by Parts loves to sing; no doubt they enjoy performing and recording. They may believe themselves to have made a wonderful contribution to the world of recorded a cappella. Sadly, that is not the case.

Beyond the technical shortcomings, the most offensive problems with MetroGnome involve the performances. For starters, the group has a tough time selling themselves as credible pop/jazz/rock performers. Too many of the soloists are laughably wooden, awkward, or the opposite — too broadway or vibrato-laden. On the whole, the men seem to do a worse job with the leads than the women. When it comes to the backing voices, these are usually thin, wimpy and, again, often inaudible with rampant pitch and blend problems. A cohesive, tight, group sound is hard to achieve when the arrangements being performed are (surprise!) incoherent. All the studio wizardry in the world would not help cure the weak heterogeneity of the many of the arrangements.

Is there a silver lining to the cloud? It was a struggle to find some bright spots, or even a few moments where Integration by Parts exhibited more integration than disintegration. On the positive side, IBP seems more convincing when performing serious-ish tunes such as Dream On and In the Air Tonight than the goofy, novelty numbers Children of the '80s and Axel F (Theme From Beverly Hills Cop). Keeping the repetoire professional may help them sound more so next time.

Ultimately, MetroGnome is not a strong recommendation for the discerning a cappella listener except as a "What Not To Do Manual".

There are a thousand things that come to mind when I listen to MetroGnome, and many have nothing to do with each other, so rather than writing a narrative, I'm gonna' try and bulletpoint a few of these thoughts.

CDs are available for $10 each plus shipping and handling at the group's website. Payment can be made by check, money order or through PayPal.