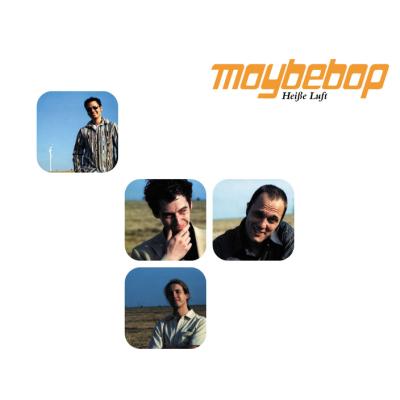 Maybebop's Heisse Luft is tight, clean and very easy on the ears. Maybebop excels at mellow or jazz influenced arrangements. The group has an excellent blend and a rhythmically tight approach. They fall a bit short where edgy rock tone is called for. Maybebop rounds all the rough edges, exposes the voices with little harmonic enhancement, and allows the bass and percussion to assume their traditional roles as supporting rather than driving elements of the songs. Shape of my heart and Spain are songs well-served by such an approach. So is the more upbeat but still mellow Ganz egal. But there are others that seem to call for a less polished approach.

Much more frustrating than the occasionally too mellow edge is the attempt to handle songs whose challenges are mismatched to Maybebop's talents. Barcelona, originally sung by the singular Freddie Mercury and operatic soprano Montserrat Caballe, and Bohemian Rhapsody are pretty failures. The group handles the gentle, blending moments of these songs and even some of the choral qualities that Queen covers require, but Maybebop simply cannot achieve the power of the originals, nor do they supplant the originals with novel interpretations. Maybebop has great voices and so they fall only to average. But the song choices here are poor ones from the audience's perspective and seem to have been based more on which songs Maybebop enjoys listening to, rather than which songs Maybebop would excel at.

Lastly, I want to comment on the beautiful singing and strange history of And so it goes. When I received this disc to review, I had no personal connection to Maybebop, other than having reviewed their previous CD. But as I listened to the tracks, I noticed that they had chosen to perform an arrangement of And so it goes penned originally by the group I founded, artistically directed and performed in for 7 years, Blind Man's Bluff.

Bluff's recording of this arrangement (created by Bluff's tenor Marc Lionetti with some musical nudges here and there from tenor Bryan Chadima, bass Nik Volgenau and myself) was recorded live at Northwestern University, and released in the early '90s (on cassette!) and only in the United States. How it traveled to Germany and found its way to Maybebop is a mystery to me. It can be a very small a cappella world sometimes.

Kudos to Maybebop for singing the challenging arrangement with beauty and grace. I've always felt this song and this arrangement to genuinely stir the emotions, Maybebop's performance does both the song and Blind Man's Bluff's arrangement true justice.

For the members of Maybebop, my review of their last album Auf die Ohren likely got them riled enough to post my picture on their wall as a dartboard. Despite some strong singing "intrinsics" (e.g. blend, tuning, solos, etc.), their album failed to gel for me, while my reviewing colleagues were glowing in their praise.

This time around, we're treated to more of the same — a mix of English-language pop standards and German tracks sung with energy and expertise. But somehow this time the results seem more consistent and engaging (or maybe my Grinchish heart has grown a few sizes in the interim years). Other than a few understandably odd inflections on the English track solos and a few slightly simplistic arrangements, there's not a lot to complain about here. Maybebop's soloists are great, but again the group's voices impress me far more in the sparkling blocks that marked their first album as well. And as with their last album, their German tracks were a lot more fun for me, particularly Ganz egal with its playful interplay of call-and-answer vocals. Many of the English tracks seem to lack the edge that would vault them over the top. For example, Sting's Shape of my heart should be wrenching and Chick Corea's Spain searing — instead both versions are capable but bland, Wonder Bread copies of the originals.

I have a feeling German-proficient listeners will enjoy this album even more, as my basic high school language skills translated one song title as something to the effect of "Love Song to a Pornographic Picture". I can only imagine. But even with the language barrier, it's clear to me Maybebop is having some fun in the studio, and that crosses all sonic lines.

So guys, take my picture down from the wall if you could — Heisse Luft is far more than hot air and deserves a listen.

German quartet Maybebop's latest album, Heiße Luft, glides on as smoothly as baby oil. It's soft rock delivered with panache and absolute musical perfection, ideal for those not enthralled by spiralmouth, Streetnix, or Off the Beat's last few albums. (Note: I am not putting myself in that category. I have equal love for the easiest of easy listening and the heaviest of heavy metal.)

Listening to this disc, I feel sorry for those who don't know any German; the group's three German-language originals are hilarious delights. I should add as a caveat that I have only a very rudimentary knowledge of German, so don't go sending me hate fan mail in German. But anyway, to give you a feel for the group's sense of humor, here's a rough translation of the first verse and chorus of Liebeslied an ein Pornographienbild, or "Love Song to a Pornographic Picture":

You sit on the shelf and laugh at me,
Printed on glazed paper, packed in plastic foil. Your smile overcomes my diffident view, Up to the price tag, you are unprotected and naked. Beads of water drip from your skin,
Behind you lies the sea, before me lies the choice. I carry you in my hands to the cash register at the exit, Your smile remains the same as I pay for you.

These words are set to the most beautiful, innocent-sounding love song you can imagine. The other two original songs are equally good: Der Ventilator is an angry rant at a broken ceiling fan, set to an upbeat samba, and Ganz egal — well, I'm not sure what it's about, but it's got a great hook and repeatedly mentions dog Scheiß, so how bad could it be?

Most of the covers are also first-rate. Take on me is the best a cappella version I've ever heard, and I've heard hundreds, complete with a snare so realistic I can't believe it's vocal. I was unfamiliar with Nik Kershaw's Wouldn't it be good, but it sounds like a cross between Todd Rundgren and James Taylor and I like it a great deal. Sting's Shape of my heart is the Cadence arrangement, and Maybebop betters the original recording by dispensing with the aggressive autotuning used on Frost Free. Barcelona nails the bombast that previously could only be produced by a collaboration between Queen and Montserrat Caballé. Spain is a gorgeous Al Jarreau ballad, done justice here. They borrow Blind Man's Bluff's arrangement of And so it goes, a wonderful, jazzy interpretation that's a breath of fresh air after a billion recordings of the King's Singers' version.

A couple slight missteps remain. The lone German-language cover, Wenn der Urlaub kommt, was a poor choice; it has an awkward hook and just isn't a good song. Thriller drags on for an endless-seeming six minutes. And Bohemian Rhapsody adds beautiful touches of Bach to the opening ballad section but lacks the necessary dynamic contrast later on; in contrast to Barcelona, this is one Queen song I've never heard successfully reproduced a cappella.

And from the Department of Pedantic Corrections, Jan Bürger is listed in the liner notes as a countertenor. However, in his solo in Take on me, he switches conspicuously to falsetto at G# above middle C. A true countertenor would be able to go all the way up to the high E in full voice. Hell, I'm a baritone, and I can sing a G# full on. He's a great singer, don't get me wrong, but countertenor he is not.

Other than those minor problems, this album is completely free of hiccups. Tuning and blend aren't even an issue; Maybebop sings effortlessly from beginning to end. It's certainly not edgy, except for some winking German lyrics, but it's consistent, self-assured, often quite beautiful, and smooooooooth as butter. It's well worth a listen.

To order the album visit the group's website and enter the "maybeshop".