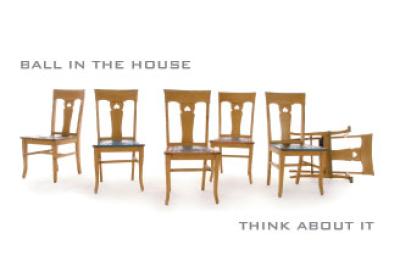 Ball in the House is a terrific group. They have a great sound, excellent production, and a fabulous press kit. The slick press kit is important — it shows they're serious and have their act together, along with enough backing to make promo materials that really look good. So what stands between them and the big time? In a word: genre.

Right now, Ball in the House is an a cappella rock band willing to be a boy band, interested in hip-hop, and possessing a star tenor soloist born to sing modern pop country. Aaron Loveland is amazing — he's got such chops and such an indelibly country sound. Think Faith Hill, Vince Gill, the Mavericks. But not Boyz II Men or New Kids on the Block, let alone this generation's urban bubblegum.

It's not like country pop and boy-band pop are that far apart. There have been a string of two-fer hits, like John Michael Montgomery and All-4-One both making a ton of money off I Swear. The thing is, you need a convincing patois, particularly if you're appealing to a straight audience with a low weirdness quotient — meaning you can't become a remix dancehall diva like K.D. Lang or produce an incredible one-off like Billy Bob Thornton's drum-bass-n-banjo take on Ring of Fire. The country guys sing with their mouths open; they have a big sound, and they haul on the words a certain way — it's unmistakable. Likewise, the urban guys have to dig into breathy melisma at the expense of pitch. The only third way is the accessible Disneyland sound, which I guess is where Rockapella's Scott Leonard fits in. So genre-devoid, it's a genre all its own.

If Ball in the House is gonna' go country, they're gonna' have to go all the way. At the Contemporary A Cappella Society's fabulous East Coast A Cappella Summit, they opened with an Alabama cover — I'm In A Hurry — set to a dance beat that Did Not Work. Fortunately, it's not on this album either, leaving us with a nice sextet of original songs. Here's how they break down: Think About It is catchy and makes better use of Jon Ryan's excellent dancebeat, but then Aaron lets loose. Wreckage goes through a similar process, moving from Change In My Life-style crooner to blazing power ballad and landing in limbo. In the middle, Change Face is fun and funky, Aaron at his most sultry and probably most accessible, so this might be a sound they can leverage. Meanwhile, songs two and three are insipid, very Backstreet Boys — and hardly any audible Aaron. How Can It Be is sweet, but it's the bookends that rock. And it seems a shame to lock up your leading charisma for the sake of shoehorning yourself.

Unless Loveland loses his accent when he wails — and I don't mean pronunciation — I think BitH is going to have a hard time breaking into the pop charts. That's certainly where the a cappella action is likely to be, so it may be worth their while to sharpen that focus. On the other hand, maybe they could break some important new ground by overhauling their backbeats and playing more fairgrounds. Country radio likes things that are different but the same, and derivative new country-pop songs with an a cappella twist could be just the thing. That is, if they can get labels interested. With a professional approach like this, I wouldn't put it past them.

Ball in the House is unapologetic aca-pop. There is no question about it: the boy band model strongly influences this group, complete with its saccharine lyrics, hip-hop/R&B stylings, and disappointing lack of substance. Think About It gives me almost nothing to think about.

"If you thank about it, you'll realize it ain't worth givin' up on us jus' becuz it's gettin' rough." Neither the opening track nor the album as a whole is rough by any means. BitH has produced a clean-sounding, slickly-effected album. Or EP. Whatever six tracks on a disc is called these days. The album's strongest studio work is on the rhythm section. The vp is thumpy, crisp, and well-rounded. The bass is 100% inhuman, with no original octave signal but for moments of two songs. The bass feels solid as bedrock without overpowering other parts. Synthetic, keyboard-like highlights contrast nicely with the otherwise organic vocals on the album. Solos are well-miked, with a closer, more intimate feel during quieter sections and an appropriately more distant technique during trademark BitH tenor wailing.

"Love me please now that I am here." BitH seems to be counting on audiences swooning during its songs. There's really very little for the non-swooner to appreciate. This is songwriting at its most bare; arrangements are sparse but unfortunately lack the less-is-more impact you'd expect from minimalist arranging. Delivered is mostly sustained chords and patented BitH "p/repetition" (preemptive or repetitious use of the solo lyrics just in case audiences couldn't guess the words). How Can It Be has an arrangement so minimalist and artificial, it's more ambient than pop. This song is also the Velveeta cheese of this six song sandwich, with this gem: "how can it be this way, take one last look then turn away. I don't know what to say anymore."

"My instincts were wrong. That's funny ‘cuz I'm usually such a very good judge of character." All sorts of odd moments color Change Face, the group's most hip-hop, boy band song of the album. The track breaks dramatically from How Can It Be, which is sparse enough to be boring, with its intro phrase, complete with hispano-urban accents, "you know! — I don't! — get down! — like that!". This track has the highest energy of the EP as it's chock full of record scratching, heavy breathing, urban catchphrases like "yeah!", "c'mon!", "here we go!", and other noise that's not really vp, not really singing. In fact, this "mouth noise" is most of what's going on in this song; the backgrounds are repetitive and the chord progressions are boring. The bridge is one of two moments on the album during which we actually hear the bass's voice while a superfast, part-sung, part-rapped solo line juxtaposes over a chamber choir background that I suppose is very dramatic.

"I cut myself to see if I am dreaming, is this how it ends right here today? Please stay...". Yeah, that's healthy — oh, right! Almost forgot! This is heartsick POP music. Nothing healthy about it. The cliché-filled Ashmont (You're Gone) has a nice bounce to the chorus and some great dissonant harmonies. More BitH p/repetition and a back-of-the-throat, choked-up solo harm a song that could have been engaging. The bridge feels like a missed opportunity, with rehashing of earlier chorus material instead of some new, emotionally-moving chord progression. The song, a whimper about a girl leaving on a train, ends with a whimper as well; a weakly tacked on phrase from a verse.

"I try to reinvent myself but I got nothin' to build on". I love how this album ends. Wreckage sounds based on Rockapella's Change in My Life, but really wrecks itself after going over the bridge. The soloist pounds out "I feel like running away" several times with an overdone fervor that sounds like a Saturday Night Live song lampooning R&B. A clapalong section is cheesy as all hell, while the bass in the soli section ("same ole man that ran away") sounds like Papa Cletus singin' him some bass in the Branson, Missouri family jug band contest. The song, like most of the swoonpop genre, is silly.

I have been a fan of Ball in the House since meeting them in April of 1999 at the NCCA showcase I was producing. They were the first semi-professional/full-time group that I'd gotten to see perform live, and the star quality that emanated from those six guys was truly mind-blowing. I've seen them through a whole host of iterations/membership changes/genre influences in those five and a half years. Some of the changes have moved the group forward and others have challenged the group in ways I'm sure none of my two remaining guys could have imagined back then.

This latest incarnation seems to be at odds with itself in terms of the overall vision reflected in their new EP, Think About It. Just as my scores are seemingly at odds with the overall score. Let me explain.

All of the tracks on the EP are good, some are stellar, and all are drenched deep in the Ball in the House sound. And that's the problem. At times there are two groups performing on the album — the heart-wrenching power ballads hallmarked by Dave Guisti's band, and the gospel-dance performances of Aaron Loveland's.

The album as a whole doesn't form a complete concept as much as it does show off the talents of these (now five) guys. You have the tried-and-true syrupy pop stylings of How Can It Be and Ashmont (You're Gone) squared off against the R&B track Think About It, hip-hop Change Face, and the gospel greatness that is the closing track Wreckage. Except Delivered, which walks the fence between the pop ballad and gospel scream.

From my praise, you can tell I love these songs individually. From my scores, you can tell that they don't go well together. These six tracks are FANTASTIC singles, but the style shifts, paired and presented together on an album as short as this one, are completely jarring, taking away from my overall enjoyment of the album. To me, it sounds more like a demo recording the guys would use for a corporate gig or radio show (select which track you like and that's the BitH we'll bring you!).

Each of the guys brings something spectacular to the group and like I said, they fully exploit those talents on this recording. It must be really tough to be in BitH and be in love if the songwriting is any indication, though Dan Szymczak's How Can It Be elevates longing to a new level in a thoroughly pleasing fashion. JonJ Ryan's drumming has definitely placed him among the elite in the industry. His rhythmic pockets are outstanding. Tim Foust's bass resonates through each of the tracks, laying a solid foundation for the diva-ness himself, Aaron Loveland. Adept songwriting, stellar vocal-meister chops, and being an unparalleled fashionista make him the complete package. I mean, if the split-second timing of the Change Face bridge doesn't make you marvel at his prowess, nothing will.

I can't begin to explain how much Guisti's voice and songwriting move me. His is a true talent that only gets better with age. Past RARBers have claimed that he's possibly the best in the business. He's got my vote.

I do hope producer Gabriel Mann (the invisible BitHer in the overturned chair, if you will) will release a second GASP album with a dance remix of Think About It. That, my friends, would be money.

So I'm fully in support of you purchasing this album. That goes without saying... I guess Think About It was too much (diversity) and too little (number of tracks) for me to appreciate it as much as I wanted to. The eventual full-length is going to knock it out of the park.