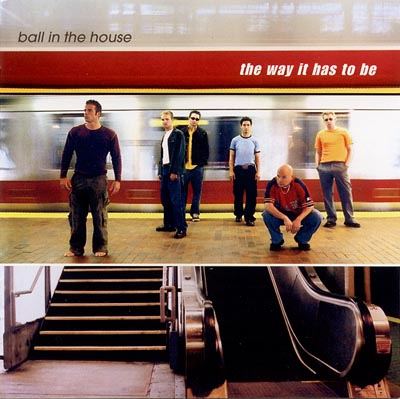 Technically, this album is brilliant. It's fun, it sounds good, it goes head-to-head with the pop music of your choice. It reaches the holy grail: if an unsuspecting stooge heard it on the radio, he wouldn't immediately notice. On the standard a cappella strong-man scale, Ball in the House rang the bell. Ta-da!

Artistically? Ooh, so much promise, so many false hopes, so much inevitably derivative music. A cappella or no, it's a damn shame from my point of view, so I sure hope it helps them sell a whole bunch of records. The CD has one fabulous song, which is one more than most of the high-grossing crap out there.

It's All About Me is the best new pop song I've heard in ages. If there were any justice in this world, it would knock Toad the Wet Sprocket and the Goo Goo Dolls off the air forever, kick the butt of those Everclear posers and then mop up the floor with the Backstreet Boys. It's got a great beat, you could dance to it at a frat party, and the lyrics have an appealing, clever gimmick — all seven lines of them.

The rest of the album is schmaltz. A half-dozen interchangeable ballads, like a slicker version of what The House Jacks were trying to do before their label dumped them anyway and they got back to making music for themselves instead of for the masses. Some of the BitH ballads sound like 'N Sync. Some sound like the latest cookie cutter "inspirational" Christian single. Most sound like they have some pretty heavy synth work, whether grounded in all-sounds-on-this-album-were-created-using-only-the-human-voice or not. I don't care. The good parts are still good and the cheesy parts are maybe more bearable because they sound like they came out of a Roland, instead of just through it.

The one cover, Karma Chameleon, has grown a bit since I first heard them sing it five years ago. I won't say too much about the other uptunes, except this: Tasty has a great driving beat which was absolutely ruined for me because I keep hearing the chorus as "Tasty, Tastee Freeze".

Anyway, buy the album already. It's got one great song. You can make fun of the rest of it all you want and the proceeds will go to a good cause. In the world of would-be pop stars, these boys are as good as it gets.

When Ball in the House released its eponymous CD several years ago, this reviewer was not overly impressed. The Boston-based group had problems in tuning, in energy, and in lackluster percussion. There just wasn't much there.

All of that has changed.

BitH's new album is The Way It Has to Be, indeed. In a word, this album rocks. The guys have put together a collection of mostly originals, most of them convincing and all of them well-engineered and overflowing with energy. The Way It Has to Be is intense and soulful, chock to the brim with sound and shine.

Put another way, BitH has clearly done its homework. Their influences are clear: more than a few nods in the direction of contemporary a cappella and contemporary pop. It's All About Me recalls 'N Sync, Tasty will remind a cappella aficionados of The Blenders' Tasty, Tasty, Tasty...and perhaps it's these two influences that make this disc work so well. Shimmering, out-and-out harmony meets modern pop sensibility, to generally fantastic effect.

Is there work still to be done? Perhaps; lyrics sometimes teeter at the edge of contrivance, and occasionally the tenor soloist is too sweet for the song's own good. But with The Way It Has to Be, BitH proves at last how good they are: far and away one of the best things out there.

I've listened to hundreds and hundreds of a cappella albums in my short life. Most of them are okay; some of them are really bad. This one, with a select handful of others, can simply be described as a cappella perfection.

The album production by Gabriel Mann and Peter Bunetta is, as always, first class. Sure, you can hear the production in every track, and BitH would be hard-pressed to create this "exact" sound in a live show, but so what? Who really cares? This album rocks.

Out of the thirteen originals, I could conceivably hear ten of them getting rotations on top 40 radio stations across the nation. I'd be surprised if local Boston affiliates weren't playing them as we speak. The one cover song on the album, Karma Chameleon, is also fantastic. Would Culture Club appreciate the new hip-hop feel to it? Probably not, but again, who cares? I sure didn't.

My favorite tracks were It's All About Me, Something I Don't Know, More, Goodbye, and Just Because. It's hard to pick my favorites when every track is so lusciously good. If I have a complaint about the tracks on this album, it would be that almost all of the originals are centered on love, relationships, or other romantic scenarios. I would like to see BitH push the limits of their writing on their next album and find some different subject material for their songs.

More good stuff: The soloists in this group are what really stand them apart from other vocal bands. Without taking anything away from Scott Leonard (Rockapella), Greg Whipple (m-pact), or Gabe (Mann) Rutman (spiralmouth), Dave Guisti has a legitimate claim to being the best soloist in a cappella today. This guy can sing circles around the best in the business: smooth, clear, and controlled. Stephen McNulty also deserves a mention for his solo work. At first, I didn't really take to his voice, but after a few times through his tracks I wouldn't want to hear anyone besides him singing lead on those songs.

This album is miles better than their last, self-titled effort. BiTH has matured into THE premiere all-male vocal band in the nation. No contemporary a cappella collection is complete without adding The Way It Has To Be from Ball in the House. Kudos for your hard work, guys!

CDs are available at music stores throughout the US (if they don't have it, they can order it), at Ball in the House shows, or by ordering it through the group's web site.