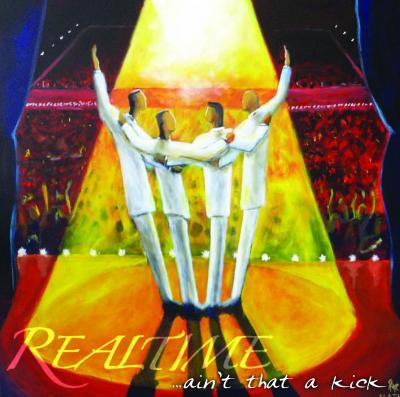 Realtime's latest album Ain't That A Kick pretty much picks up where their last album Four Brothers left off. When singing traditional barbershop, these guys are at the very top of their game. When they stray a little, the results are interesting, if not quite as successful.

As 2005 Barbershop Harmony Society champs and 2007 Northern Harmony Sweeps winners, it would be hard and indeed unjustified to argue with Realtime's talent in the barbershop department. They are most at home in this style and they show it very clearly on classic tracks like Story Of The Rose (Heart Of My Heart), We Never Really Say Goodbye and Come Fly With Me, the last of which was recorded live at the 2005 competition in Salt lake City. Yes, that same lack of dynamic variation that typified Four Brothers still nags at me — especially at the top of They Can't Take That Away From Me and again on Cry Me A River whose reinterpretation as a "barbershop powerhouse" (per the liner notes) I did not care for at all — but the singing is almost always spot-on pitch perfect and in tune on their "native" material.

To their credit, and perhaps responding to a bit of RARB criticism of their last album, the group does dare to mix it up a bit more on this release. There's a bit of doo-wop (Midnight Serenade), some vocal jazz/barbershop fusion (Waltz For Debby) and even some straight-ahead rock and roll (I'm A Believer). Unfortunately, while I was very much grateful for the variation this time around, the results don't measure up to the quality of the group's barbershop work. Once again, the dynamics, or lack thereof, are a real hindrance — though there are some tender moments to be found, to borrow from Pirandello, these are still "four guys in search of a pianissimo". Equally problematic is the lack of creativity shown on the aforementioned tracks and others that stretch the boundaries of barbershop singing. With the ability to sing such close harmonies and tight rhythms, I wished the background blocks in the vocal jazz moments were more playful with chord substitutions and syncopations. Similarly, on the more traditionally modern a cappella-y tracks (distinct soloist, rhythmic background, separate bass line), I yearned for a background that wasn't so blatantly straightforward and, with apologies to the gang from UPenn, on the beat. And in the "holy wasted opportunity Batman" category, with the opportunity to sing with their "heroes and mentors", The Most Happy Fellows (1977 Barbershop Harmony Society), why, oh why on earth did they choose Grayston Ives' I'll Follow The Sun — a non-Barbershop arrangement (!!!) already recorded definitively (in my opinion) and popularized by The Kings Singers. These guys are too good at what they do to be not just covering, but duplicating, other non-Barbershop a cappella groups without any reinterpretation or imagination.

Understand that these criticisms are really backhanded praise because there is no question that these gents can sing brilliantly. It's an issue of balance: on their first album it was too much of the same. On this album, it's a noble effort in variation that falls a bit short in creativity and execution. For barbershop fans, this is still worthwhile buy and you probably didn't need me to tell you that. For everyone else, you'll probably admire it a great deal, but you won't listen to it very often.

Was it perhaps the great sages at Meineke who coined (or trademarked) the phrase "If it ain't broke, don't fix it?". Such advice was well-heeded by Realtime. There's a reason most barbershop sounds similar — is there anything in this world as great as a spectacularly sung, in tune, and drawn out cadence? Realtime sticks to the basics and delivers a stunning album.

Four Brothers, Realtime's debut album, left me unimpressed. These men must have worked out their kinks, because Ain't That A Kick is wonderful. Tuning and blend are refined, arrangements are better, cadences ring true, and everything is more energy-infused. The album is overwhelmingly barbershop style, which Realtime seems to have mastered. Included is a live performance of Come Fly With Me which earned them a national championship in the Barbershop Harmony Society. With such a crisp and energetic performance, it's no wonder the auditorium erupted in applause upon its completion.

It almost seems unfair to be judging Realtime on creativity and innovation — this album is about as traditional as it comes and offers little in that regard. Realtime seems content to stick to tradition and what they do best, but with how good they are can you really blame them? To my mind, there isn't a whole lot to say about this album. It's an almost perfect representation of how Realtime sounds live (if the live track is any indication), and shows four guys who are at the top of their game in the barbershop genre. If you like barbershop, you will like this album.

Classy, sassy, and a barrel of fun, Realtime's latest release Ain't That A Kick is another enjoyable album of barbershop standards and classics with some new twists on some very familiar songs from the American (and British) songbook. From the delightful album opener that uses a spot-on walking bass and a beautiful trio of tenors singing "The Partridge Family" theme song all the way through to the soft and somber We Never Really Say Goodbye which utilizes a lovely countertenor that contrasts nicely against the lower voices, Ain't That A Kick is an energetic and engaging listen.

One major and consistent problem is the balance of volume between the lead singer and background vocals, especially when the soloist is not a tenor. Despite a colorful and round tone from the lead on Waltz For Debby, one almost has to strain to hear the words against the three supporting vocalists. I'm A Believer also suffers this setback, which is unfortunate because the barbershop "sound" lends itself nicely to this song and is a pleasant change from the typical arrangements of this song heard lately. Believer takes a more successful turn after the modulation to a higher key and the melody is sung by the tenor trio. One Note Samba also becomes incomprehensible in the rare moments that the quartet isn't singing as one, although the gimmick of the piece is interesting. It may have fared a little better if the samba rhythm and style had been a little more developed. In all songs on the album, though, Tom Metzger's bass does a great job at keeping tempo and pepping up the pieces.

I really found myself enjoying the tight harmonies of I'll Follow The Sun, which has an arrangement that relies less on barbershop techniques and more on arpeggiated, punctuated "doo" syllables to create the background texture and set the tempo. Midnight Serenade also begins with a great doo-wop set-up and is a perky, enlivening listen; to me, this song is the epitome of what barbershop should sound like with close harmonies, a great bass to set up the chords, and entertaining lyrics that tell a story. Even the standard They Can't Take That Away From Me is interpreted a new way that keeps the listener amused and involved.

Barbershop still hasn't won my heart, but the albums released by Realtime certainly affirm my appreciation for the genre. Even if you avoid this type of a cappella music, you cannot deny the honest performance of some quality four-part harmony. For the adamant barbershop naysayers, Ain't That A Kick is certainly a kick in the head that could help knock some sense into them.