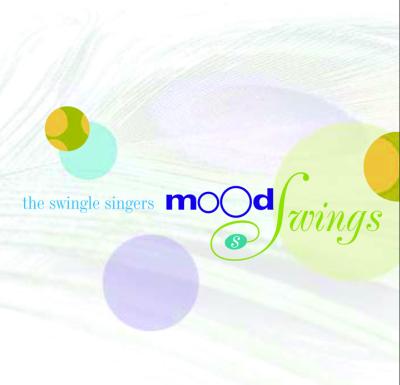 Going on 40, the Swingle Singers, as a group, are an institution in a cappella. And where another group's identical performance of these same tracks would be musical, artful, graceful, but perhaps dated, here the listener has the opportunity to hear the real deal. The idea of dated is just non-sensical in this context. Mood Swings is the pitch-perfect rendition of what has become the very backbone of the vocal jazz ensemble sound. Aside from a personal leaning towards less reverb, there's not too much else you could want from Mood Swings. Even the uber-hipsters have to realize the funky-comes-full-circle kitsch value of lounge-perfection tracks like Surfboard, The Girl from Ipanema, The Lady is a Tramp, and Soul Bossa Nova (known to the collegiate crowd as the Austin Powers theme).

So now that you know I'm about to launch into the all-that's-great-analysis, I'm sure you can guess number one on the list: blennnnnnnd. Yum. So deliciously blendy. In fact, if you listen carefully, you'll realize that there are almost no groups that achieve this particular manner of blend. The singers, rather than matching formants, literally appear to turn on and off their formants (groups of emphasized harmonics that form vowel sounds). As soloists, they perform full of personality and individuality, but as backups, the sound is an almost ethereal whisper, somehow evoking a full sound from a collection of ghost-like deliveries.

The second accolade is rhythm. The Swingle Singers are quite exact with their subdivisions. Their process seems to quantize some of the freeflow of the jazz idiom. Some listeners will marvel, and some may pine for a less controlled delivery. Again, this is a matter of taste and likely a song-specific one. But I dare you not to get groovy listening to a deep pocket like So What .

As you may have guessed, anyone allergic to shmaltz will simply have to skip a few tracks, but nonetheless, I urge you to pick this one up, sip your cognac and really enjoy the smooth vocal jazz excellence of Mood Swings.

My last encounter with the Swingle Singers, their concert album Live in Japan, left me a bit underwhelmed. While I found their famous reinterpretations of classical pieces impressive, they weren't hugely fun to listen to. Combine that with an eclectic mix of pop and holiday covers, and you get a bit of an odd album.

With Mood Swings, the Swingle Singers cut to the chase. This group is quite good at jazz and thus this jazz album is quite good. Tight, bright tuning and a generally confident feel for the style at hand, whether it be a langorous scat over a group vamp, or a dramatic close to a standard like My Funny Valentine, make for a very solid outing.

My favorite track was the odd but engaging Surfboard. This song has great energy, and listening to the Swingles morph through various melodic lines and styles throughout the three minutes was a pretty fun journey. The group pulls stylistic shifts mid-track on a few other songs, and generally it works well for them. I would also highlight the sexy vibe of Insensatez, particularly where the baritone is joined by his female counterpart on the melody an octave up.

In general, I wasn't bowled over by the soloists on this disc — typically a bit too much vibrato and not enough character to really carry the song. I did find that the baritone solo lines seemed to go over a bit better than the soprano ones but that might be splitting hairs. Where the Swingle Singers really shine is in their ensemble work, and I found myself eagerly awaiting the moment in most tracks where the group really kicks in with some slammin' harmony.

For non-Swingle fans, this is not an album that necessarily grabs your attention front and center, given its slightly monotonous tracklist and the nature of the repertoire. But the Swingle Singers are talented and energetic, and this album captures them doing what they do best — if you're in the mood for that.

For any faithful a cappella junkie, The Swingle Singers need no introduction. Despite constantly shifting membership, the British vocal jazz octet has been an institution for the last 40 years. After recent albums devoted to movie themes, The Beatles, and "Swingled" Romantic piano music, they've returned to more traditional turf on their latest album, Mood Swings. This collection of 16 jazz classics won't disappoint the vast majority of listeners.

The reason it slightly disappoints me is because I have had the outstanding good fortune to see The Swingle Singers live. They approach the quintessentially American jazz idiom with a quintessentially British reserve, which in concert comes off as brilliantly dry wit and translates into an electrifying show. And while this recording captures their sound as well as any recording could, that same British reserve seems almost sleepy by comparison when it's squashed onto a small plastic platter. Similarly, though their legendary precision is amazing to hear on record, nothing can compare with being in the same room as they effortlessly do it all on the spot.

But enough griping; there's so much to love about this disc. Arrangements are straightforward and unpretentious; they seek only to pay their respects to this great music, not reinvent it. Wendy Nieper's scatting is gorgeous and heartstopping. Jeremy Sadler's vocal percussion, fairly rudimentary when I saw the group back in 2001, has evolved to the point where he can pull off a perfect imitation of a Jimmy Cobb drum solo, something I've heard no other vocal percussionist accomplish. Their version of Quincy Jones' Soul Bossa Nova, better known today as the theme from the Austin Powers movies, is a gas. Of course, there's not a sour note, unblended chord, or awkward voicing anywhere on the album. And then there are the songs themselves — So What, My Funny Valentine, The Lady is a Tramp, Just One of Those Things, All the Things You Are, It Don't Mean a Thing (If It Ain't Got That Swing) — they're classics for a reason, folks. No matter how many musicians of all stripes cover them, they never, ever get old.

There is one notable blemish and one overall problem. The overall problem is that the album isn't paced well. It's organized thematically: first the Miles Davis piece, then four bossa novas, then three ballads, then a three-song Rodgers and Hart tribute, then four swing standards, then Austin Powers. The downside of this style of album sequencing makes itself clear during the ballad section. While they're all beautiful, taken one after another for 14 minutes, the effect is probably more soporific than the Swingles intended. The blemish comes during the Rodgers and Hart tribute. Along with two masterpieces, Valentine and Tramp, they for some reason cover Have You Met Miss Jones?, one of the pair's worst songs. Music director Joanna Forbes turns in an awkward solo, but I don't blame her for not knowing what to do with the clunky, contrived melody. This song is best relegated to the relative obscurity it has earned.

In the world of vocal jazz recordings, this is about as good as it gets. But if you're really looking for a treat, go see The Swingle Singers live next time they're touring this side of the pond.

USA:
Available from direct from the swingle singers.