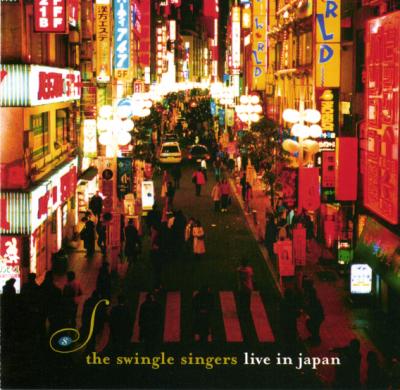 The human voice is a glorious instrument, and never more so than when it is wielded by any of The Swingle Singers.

There are eight of them, neatly stacked in a descending line of sopranos, altos, tenors and basses, separated by timbre as much as by range. The sopranos and tenors have a crystalline purity, whether straight or vibratoed. The altos and basses have a darker tone, swaddled in a soft halo that might be a hint breathy. As an ensemble, the blend is without parallel, but as soloists each singer can stamp his or her own imprimatur.

The performances on this CD will blow your socks off. When the applause kicks in at the end of each song, it will blow you away again as you remember that it is a live recording. We have stellar on-site recording and sound people to thank for this. We also have an astounding collection of music from the grey area between jazz and classical, songs that don't so much defy genre as transcend it.

I loved this CD. I loved the way these singers wrap themselves around their words, and even more I loved the way they sang with no words at all. My favorite track was Away in a Manger, which is in fact a wordless collage of several familiar themes overlaid and taken in a new direction. Even the pop songs are transcendent. This version of Bohemian Rhapsody sets the gold standard for how to add technical effects to a vocal performance, and their Fool on the Hill is every bit as good as the publicity that precedes it.

The dynamic range of The Swingle Singers' 1812 Overture is stunning. Their precision is breathtaking. The soprano lines are achingly pure. The group's five minutes and 40 seconds of live concentration is nothing short of extraordinary. You'll be amazed at how many times you forget that this is really just eight people singing "nimmanimmanimma" and variations. You've got to hear this.

I've been taking the alto line since approximately 1982, and at times the sopranos in my life have mistaken my natural pride and enthusiasm for my voice part for, well, anti-soprano bigotry. (I may have expressed my wish that they pipe down a bit too freely.) Turns out this whole misunderstanding only occurred because I wasn't singing with The Swingle Singers. Sopranos this good are welcome to overbalance me any day of the week. There's very little to say about The Swingles' tuning, blend, and rhythm, other than to note that this is how it's done. This is some of the most technically perfect non-studio work I've ever heard.

On Live in Japan, recorded in Tokyo in December 2000, the legendary group offers four distinct mini-albums. While they are all extremely well done, few listeners will love them all equally. I enjoyed the 15-minute set of tasteful, cleverly arranged Christmas songs, and I was extremely impressed by the opening set of golden-age ballads. But when The Swingles did what The Swingles do best — covering the greatest hits of instrumental classical music — my admiration turned to awe. It's usually not a good idea to mess with Bach, but the group does more justice to Air on the G String with an ethereal soprano solo than I've ever heard any violinist do with an actual G string. Why aren't the soloists credited? I'm longing to lay a virtual bouquet at the feet of the ladies responsible for the subtle scat on Largo and the delightful calisthenics on Badinerie.

On the other hand, The Swingles took a wrong turn with their perplexing choice to cover popular songs that, according to the liner notes, "borrow ingredients from Bach's repertory". The Beatles may have borrowed Bach's chord progressions, but certainly not his solo vocal technique, and that's what The Swingles inadvertently do here. Some of the world's most talented people were just not meant to sing classic rock, and I regret to say that these soloists are among them. The CD hits embarrassing lows when square interpretations of Ticket to Ride and Bohemian Rhapsody are embellished with a cheesy shooting-through-space sound effect.

Due to the diversity of the set list, I hesitate to recommend the purchase of this album rather than one of the group's more thematically consistent recordings. I am rarely in the mood for Christmas carols, Mack the Knife, and a very white Whiter Shade of Pale all at the same time. Unless you're collecting The Swingles' entire oeuvre (not a bad idea), I'd say pick one of their earlier albums.

I was disappointed to learn that The Swingle Singers did not acquire their name from an SAT word I had forgotten, but from Ward Swingle, the founder of the group. According to their website, the Swingle Singers are an a cappella institution that has been around for decades, a revolving door of singers upholding a fine tradition of "Swingle-singing...the use of the voice as an instrument in a fusion of jazz and classical styles". You get the impression that these people know what they're doing, and have stuck with it. This is undoubtedly true, but the product reaches varying degrees of success.

The Swingle Singers' greatest strength is also their Achilles heel. Blessed with eight competent, well-trained singers, they produce some beautiful chords, with the warm blend and good tuning every professional group should nail. This accomplishment is all the more remarkable since the whole album is live;Live in Japan's tuning and blend are superior to many studio-edited albums I've suffered through. I was also impressed with the superb balance between the block and solo, often a weak point in live a cappella recordings.

But the sweet, inoffensive voices that make up these blocks also seldom deliver a compelling solo line. This is exacerbated by the extensive overuse of "doo" and "dah" as syllables in nearly all 21 blocks, explained by their website as a stylistic choice to avoid complicating intricate jazz or classical counterpoints. While this may be true, this choice does not make for the most exciting listening experience.

It's not that The Swingle Singers aren't putting in the effort. Epic choices like Bohemian Rhapsody and 1812 Overture get an A just for the undertaking, but unfortunately the execution leaves quite a bit to be desired. Queen's bombastic, screaming masterpiece loses nearly all of its edge here, and it is hard to replicate the drama of Tchaikovsky with seven voices and some vocal percussion.

The Swingles pride themselves on their vocal renderings of famous classical instrumentals, which were undoubtedly avant garde decades ago. But hearing these reinterpretations lost novelty after the first minute or so, particularly when the sopranos were forced to shriek out extended violin runs. You may be familiar with that painful moment when a group decides to recreate a high and difficult guitar solo in the instrumental section of a song; imagine it instead as forming the majority of the track. This was less of a problem on slower tracks like Largo.

At their best, The Swingle Singers produce moments of real beauty and emotion, like their CARA-winning track, Fool on the Hill. A more carefully edited compilation would showcase their strengths and ingenuity without exposing the flaws of a clearly talented ensemble.

Available from Primarily A Cappella in the USA through www.swinglesingers.com worldwide.