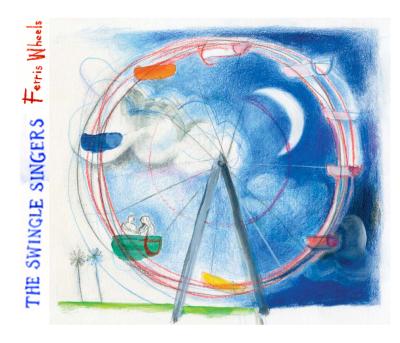 Elegant, effortless, and gentle as a half-forgotten dream, the Swingle Singers remain the vanguards of the intimate vocal jazz style for which they became famous so many decades ago. With several new voices in the ensemble, the Swingle Singers are as organic and inventive as ever, while maintaining an abiding respect for the rich vocal jazz tradition they helped create.

Ferris Wheels truly sounds pristine and otherworldly without a semblance of heavy-handed studio magic, but upbeat, this is not. And bop around the room, you definitely will not. But riveting, it is. Headphones secure, you'll drift within the soulful, melancholy ache of life's beautiful indignities, like a ghost, mere inches from a shimmering, beautiful world, forever a breath beyond her grasp. At their best, the Swingle Singers are absolutely angelic.

Eleanor Rigby, No More "I Love You's", and God Only Knows are stunning, with voices swirled and dashed like paint on a canvas. The Swingle Singers' deft access to warm, airy pianissimos gives track after track easy dynamic depth and emotional, textural intimacy.

But all this praise isn't to say that Ferris Wheels is without flaw. Summer Soft mellows out an already mellow track, exposes a singer's weaker qualities by demanding a rock texture of a jazz singer, and then adds solid, but strangely uncalled-for beatboxing. By comparison, it's a mess with innate talent at odds with musical demands. A few song choices seem hopelessly dated, if beautiful. Their dramatic centers, stemming from personas that seem two-dimensional — even sappy — by modern standards, despite the insistent implication of greater depth by the sophisticated arrangements and musicality. It's a tension that's better resolved by the stronger, more contemporary lyricsapes making up the majority of the tracks.

In the end, these are relatively minor quibbles. Ferris Wheels is a timeless, must-own for any true fan of vocal jazz ensemble excellence.

The Swingle Singers' Ferris Wheels is a bit like fine china: delicate, nuanced, and sophisticated. The highly musical SATB octet takes you through a whimsical journey of soft but powerful tracks that beg you to listen closely lest you miss a critical part of its intricate arrangements. Among a sea of in-your-face collegiate albums, Ferris Wheels provides a bit of understated brilliance, and it's this quality that sets it apart.

The Swingle Singers grab your right from the outset with interesting and unique material. The opening moments of Unravel, with deliberate dissonance and tremendous tension, provide for a stellar introduction. The group made a seemingly conscious decision to steer clear of "powerhouse" or upbeat songs, opting instead for very passionate, liquid, emotional music. They do it very well, and this consistent quality gives the album a great personality — almost like a concept album.

The group's exceptional arrangements add color to the pieces without getting in the way. Almost every member of the group contributed on the arranging front, and there isn't one dud in the lot. This, coupled with precise yet passionate singing, speaks to the group's tremendous musicality.

The highlight of the album for me is the masterful No More "I Love You's", featuring an exquisite arrangement that gives "a nod to Imogen Heap." The purposeful dissonance and perfect blend and emotion from the singers makes it one of the best tracks I've heard in a long time. The trumpet solo on L'Été 42 also deserves special mention — it's fabulous.

There are a few moments when I felt the group could have used a bit more energy, and a few of the male solos are underwhelming. But this hardly makes any difference — these nitpicks are so few and far between that they're easy to forgive.

Ferris Wheels is an must-own album with exceptional musicality and thoughtful arrangements. Pick it up, light some candles, take a bath, and lose yourself in the music.

The Swingle Singers truly need no introduction — and so it's no surprise that they've nailed yet another recording with Ferris Wheels.

These eight singers blend and sing beautifully, and while these dozen songs all sit squarely on the down-tempo side of vocal jazz, that's the Swingles' sweet spot. Unravel is a stunningly haunting way to kick off the album: there are so many stretchy phrases here — where subtle dynamic changes add a rich texture — that the track is compelling even on multiple listens. Their arrangement of Eleanor Rigby stretches the two-minute original into four minutes that accentuate the song's isolation and bleakness. Similarly, their take on God Only Knows turns the bouncy pop of the original into a tender, almost desperate love song (complete with some lovely scatting at the end). I could gush such words of praise on every song here, but that might get boring to read. Needless to say, the whole album is just delightful to hear.

No album is perfect, and Ferris Wheels has a few minor blemishes: most notably, the female soloists are far stronger than the male (and are used more widely, especially since some originally male songs are led by women here: Nick Drake's River Man, the Beach Boys' God Only Knows, plus duets on Billy Joel's Lullabye (Goodnight, My Angel) and the Beatles' Eleanor Rigby). Secondly, the group relies on the fade-out more often than I prefer; there's something so beautiful about their closing chord on On the 4th of July that it makes me wish other songs hadn't faded out (or just trailed off). A few songs feel a bit too long (Both Sides Now in particular felt a little repetitive), but these minor nitpicks are like complaining that my diamond shoes are too tight: this song in particular is so beautifully arranged and exquisitely, expressively sung that a little repetitiveness is really no bother at all. I could listen to the Swingle Singers perform a 20-minute version of it, and it wouldn't be the least bit boring or burdensome to my ears.

One of the most lovely surprises inside the liner notes is the care with which the group has selected these songs: there's a little paragraph about why each song was chosen or a little bit of history about it. This goes a long way toward making Ferris Wheels feel purposeful and cohesive. Not every group could line up a Björk song next to tunes by Joni Mitchell, Nick Drake, and Green Day. But the Swingles do so, masterfully. This is the kind of rare album that does not need the qualifier "a cappella" (as in: "this is really great for a cappella" or "check out what they can do with no instruments"). Ferris Wheels is a lovely album all around.