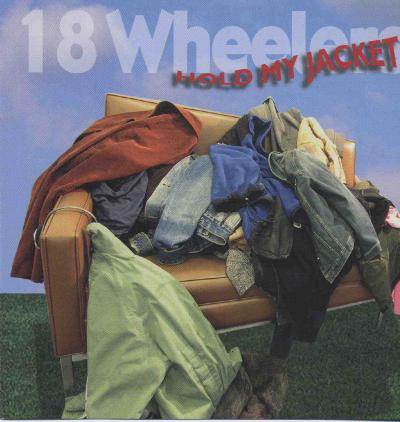 Hold My Jacket is my first foray into the world of contemporary recorded high school a cappella. I've seen the occasional high school group in the last couple years and have yet to be impressed. This album from The 18 Wheelers is impressive when considering the age of the singers on it, though their age is really the most remarkable thing about it when comparing it to the general body of a cappella out there.

The best aspect of this album is the energy delivered by these kids. They seem to really enjoy singing, whether it is Ben Folds, Justin Timberlake, or Gyorgi Ligeti (I loved singing difficult 20th century chamber music in high school, too ... still would, if the opportunity arose). In a scene where I hear too many groups who sound bored with their material, it's refreshing to hear this youthful excitement coming through my headphones. Arrangements (almost all penned by the group's musical director, Kristin Sprague) are quite good, too, with good layering of parts and moments of complexity and simple moments where appropriate.

Given that the singers are just getting their adult voices, I am not surprised to find tuning and blend problems on the disc. Blend is less a problem within each section than between sections, with tone colors differing a lot between the women and the men. Some parts have tones that are too musical theater in style, and this is especially a problem on the classical repertoire, with bright and wide vowels that are inappropriate for the style of music they're singing (La Tricotea, for example).

Soloists, too, show limitations that I'd expect in young singers: less vocal control and difficulty connecting emotionally to songs. Some songs have passable soloists, some have leads who are outmatched by the song they are singing (why record a bass-requiring song like 16 Tons without raising the key so the soloist can hit the last note, and why put an outmatched solo in the second track spot?), and a couple have some really nice-sounding leads (Felicia Ricci on Us Against the World and Emily Coxe on Time after Time are the two standouts of the disc). Give 'em time; there's clearly raw talent here, and in time they will shine.

It's tough to compare such young voices against the whole of a cappella-dom out there, but such is my task. There is some really good stuff here, and if I were in The 18 Wheelers, I would certainly show this CD off to anyone I could get a hold of. It might not turn heads out of context, but I can't ignore the context: these kids are in high school, and making fine music. In that light, Hold My Jacket is quite an accomplishment.

Although it would be nice to begin without a caveat, it would seem appropriate to first remind readers that the album and individual song scores meted out herein are based on a comparison to the entire body of recorded a cappella. For example, the 18 Wheeler's 16 Tons recording is being weighed against the version of the same arrangement originally by Rockapella. The 18 Wheelers are a group of high school students. As such, it is unreasonable and unfair to expect either their performances or the sophistication of their recording to match those of professionals. But such is the task of this reviewer, and the scores are duly reflective.

The main problem with Hold My Jacket is primarily one of musicianship. With vocal music, it is very difficult to achieve even minimal levels of musicianship without proper breath support. The most notable difference between this recording and every collegiate disc I've heard — even the below-average ones — is the comparative lack of volume produced by the individual singers. The number one thing the 18 Wheelers can do to improve their sound is to spend more time on breath support in order to produce sustained, solid pitches. The better the pitch, the more robust and blendy the overall group sound will be become. As the score of "1" indicates, tuning is a real problem on this recording. One's ability to control pitch is directly related to breath support. This is the clear first step for improving the group sound.

The subsequent step would be making the music more interesting. The group occasionally exhibits a decent sense of dynamics and the ability to create musical moments. The few tunes that earned a score of "3" (Annie Waits, Zephyr, Time after Time, and La Tricotea) did so because the group breathes life into the performances. The effort is good, but the group can do more. Loud can be louder, quiet can be quieter — the buildup and transition between the two more intense and purposeful.

An aside for soloists: Spend more time studying and practicing pop stylings with the same deliberateness as you would classical training. It's not something everyone can do; it takes work and refinement. Every soloist on the disc could improve his or her pop performance sensibilities. Try to avoid the Broadway, vibrato sound; most pop tunes sound silly with it. Be mindful of over-enunciating the lyrics and relying too much on the text; many pop performances have a less-precise, almost sloppy approach to the words.

The arrangements by director Kristen Sprague are varied and take advantage of the large number of members. The group should consider itself lucky to have a director with as much a cappella savvy and arranging talent as Sprague. The students are clearly learning collegiate-level material. She is setting the bar high and challenging her students, which is a good thing. Besides the pop fare, Sprague imbues the group's set with classical arrangements (La Tricotea, Or Si Rallegri Il Cielo and Reggel on this disc) with which the students surprisingly seem to have more comfort and facility.

A few tunes feature some nice vocal percussion work, Don't Speak and Torn especially. However, steadiness was the biggest problem. No one cares how many flashy fills a drummer can do unless he or she can maintain a steady, rock-solid beat. Practicing with a metronome is the best way to do this. The singers themselves could benefit from metronome practice as well.

Hopefully, the low scores will not so much dishearten as provide an opportunity to learn about the areas that could use improvement. After all, the scores are not intended to be damning, or in any way an indication that the members of the 18 Wheelers should put their talents elsewhere — quite the opposite, actually. Ultimately, they should be proud for having braved the studio and given the very difficult work of a cappella recording an honest, solid effort. Should they continue to do so with even greater fervor, there is no doubt their recorded sound will improve — as will their scores.

Hold My Jacket sounds exactly like what it is: a high school album. It's difficult to give remarks of praise when my task is to compare the album to the general body of a cappella recordings out there. It simply doesn't hold up to the majority of released works. I can't hold this against the 18 Wheelers, but at the same time, I can't embellish on the fact that this isn't really a great album, or sadly, even a good one.

Issues stem from everything ranging from the recording techniques (sounds like one mike for the soloist plus possibly one or two more for the chorus, all tracked at the same time) to poor lead vocals to mushy backgrounds and unpleasant tuning. Strangely, Love Fool, Zephyr, and Like I Love You seem to be recorded differently than the other tracks, applying a little bit more reverb. There's also a mysterious person named "Sprague" not listed anywhere in the liner notes at all except as being cited for six of the fourteen arrangements.

Not surprisingly, the three aurally best tracks are the classical, previously arranged pieces appearing smack dab in the middle of the album. Here, blend is improved, enunciation is clearer, and the students have a better grasp of dynamics. Still, the tenors are extremely weak, and as could be expected, the sopranos slightly overshadow the other voices.

For what they are, the 18 Wheelers have a comfortable grasp of the basics of a cappella, perhaps due to their proximity to the historic Derbies, Chattertocks, and other Brown University mainstays. There's a lot of work to be done, but I won't hold it against them. The 18 Wheelers, with their diverse array of pieces from 16th century Spain through 20th century pop, should still have much to be proud of with this album.