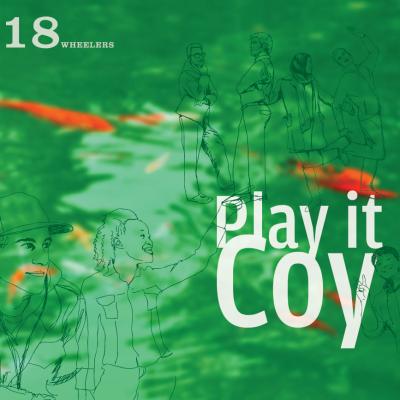 The Wheeler School can be proud of its 18 Wheelers. The group has put together a pretty good album here, the caveat being that "pretty good" is now "average" when compared to the larger a cappella world against which we reviewers must judge albums. There are two songs here that I myself would have considered for inclusion in a Best of High School A Cappella album (Heart of the Matter and Samson), one song that actually made it onto the 2010-2011 BOHSA album (Mercy), and only one that I would consider a dud (Settle Down).

The 18 Wheelers are a mixed group of male and female singers. Solos are spread evenly between males and females, with each getting five on the ten-track album. The backup vocals seem to be more heavily weighted towards the top end of the spectrum, which is not necessarily a bad thing as the females do seem for the most part to be the better singers. In fact, the female backups are probably the strongest part of the group, musically speaking. Tenors are mainly inaudible except when there is a tenor soloist. The basses come through loud and clear, but the arrangements do not usually feature any sort of interesting bass line. Vocal percussion is tastefully used, and hits the balance that I personally like between natural sound vs. studio enhancements, not leaning too much towards either direction.

The arrangements are not particularly difficult, nor are they particularly interesting. They do seem to match the singers' ability and style fairly well, and as the album progresses one gets the sense that The 18 Wheelers are enjoying themselves.

Unfortunately the greatest shortcoming on the album is the soloists, in particular the male soloists. In Misery the soloist is too raspy and harsh, and a little flat in some places. In Everything the soloist is similarly raspy, has some real trouble with the low parts, and there are some weird artifacts in his voice that may have come from autotuning. In Love's Divine, the soloist keeps cutting notes off early and going out of tune at the end of them, but (I feel) has some potential to become quite good with some more practice and training. The soloist in She's Leaving Home sounds a little too put-on, not authentic. Finally, Back Here has two or three soloists who trade back and forth a couple of times; they do OK, but don't grab me. In short, there is not a single male soloist that I really like.

The female soloists, conversely, are nearly all good. The single exception is on what I feel is the weakest track of the album, Settle Down. The soloist's cadence and pronunciation on that track are quite odd, making her sound almost as if she has some sort of speech impediment. She also has some real trouble hitting the notes from 2:35 — 2:45 in the song. Conversely, the two tracks I like the most (Heart of the Matter and Samson) feature very nice soloists. Samson's soloist, Sophie Lo, is the best on the album from a purely technical perspective: she has a pretty voice, good control, and a subtle vibrato. Even though the bulk of the melody is quite high, she is able to jump up and hits the highest notes fairly effortlessly. Alexandra Collier in Heart of the Matter won me over for quite a different reason. She is a little flat some places, misses some runs in other places ... but gives such an innocence and sincerity to her delivery that it makes me wish the song never ends.

All things considered, I don't think I will be listening to this album myself much in the future. But Wheeler School students and alums would do well to pick it up and support their group!

To all groups I've ever seen live, be careful: I can tell what you forgot to do in-studio. I've had the pleasure of watching The 18 Wheelers, including the incarnation of the group singing on Play It Coy, multiple times. They're one of the best high school groups I've seen, and some of the group's material easily eclipses that of some collegiate groups in both musicality and showmanship. Unfortunately for The 18 Wheelers, some of these aspects of its live performance failed to translate — or be translated — to a recorded medium.

First and foremost however, there are some excellent singers in this group. Standouts are Dylan Rosser, Genetta Kah, and Alex Graff, who put many a more mature and experienced singer to shame with how effortlessly and effectively they emote and perform their leads. Other soloists aren't bad by any means but just aren't quite as stellar; the lead on Misery sounds like an (unsurprising) imitation of Darren Cris's rendition from Glee, and Jonathan Cohen's Everything is also imitative, if well sung.

Really good leads can't be completely covered up with any amount of other missteps, but they can be detracted or distracted from, both of which happen unfortunately often. These distractions come in two forms: musical and sonic. The latter category is easier to explain. For the most part, Play It Coy is bereft of strong effects and heavy-handed post-production, but the tuning and editing seems to be taken to an extreme to the point of thinness. There are close to the namesake of eighteen singers in the current group, so I'd expect to hear big thick parts and rich chords. Instead, the backs seem empty, as if there were half the people on the track as you'd expect. Some leads are treated similarly heavily, including both solos turned in by Kah. Neither Mercy nor Settle Down are songs that benefit from perfect pitch accuracy, and some parts of the solos sound noticeably beaten into tuned submission.

Musical distractions are not problems with the singing so much as with what's being sung. The vocal production on this album is excellent. The 18 Wheelers almost all sound (vocally) mature beyond their years; they're obviously still in high school but for the most part have tone far and above better than their peers. The problems arise in the arranging. Some arrangements are full of overlapping, inappropriate quotes from other songs (Everything), while others lack pads or harmonic support for the rest of the backgrounds (King of Anything, Mercy). In the case of Everything, it seems the arranger inserted quotes as matters of melodic coincidence, matching whatever song lyrics came to mind with whatever melody was written into the backs. King of Anything and Mercy are arranged as mostly rhythmic motives, so when the choruses hit, there isn't enough change in texture to keep the songs exciting.

The problem that I can't place in either category is the space around A below middle C. There are many times when I want more support from the baritone and tenor range, instead of just hearing bass and girls. This could be a function of the arrangements, but I'd sooner chalk it up to the production. The parts are definitely there, but you can only hear them if you're listening intently.

But, do not despair! There are some high points I simply have to mention. Alex Graff's lead on and arrangement of She's Leaving Home are fantastic. The backgrounds are sung musically and emotionally, matching the passion and bittersweet despair of the solo. Why such a fantastic song was buried near the end of the album is beyond me. Similarly, Settle Down shows off Kah's aforementioned singing chops, and Samson has some of the best dynamic variation on the album aside from She's Leaving Home. The second half of the album outshines the first by a considerable margin, and The 18 Wheelers would have benefited from re-ordering its album.

The 18 Wheelers do perennially well in the ICHSAs, so the musicality and talent seems to carry over from year to year. I'd recommend quite a few songs on Play It Coy to anyone who believes high schooler a cappella groups can't make an album that sounds good. However, I wouldn't recommend that they listen to the album as a whole. She's Leaving Home and Settle Down are the buried treasures on this album: next time, I'd rather not have to go digging to find them.

There has been a strong crop of high school releases this year - The Acapelican EP, High Tide, and now Play It Coy. I've heard The 18 Wheelers before on BOHSA releases, and here the group shows itself to be one of the premiere high school a cappella groups in America. The 18 Wheelers are holding their own against the average collegiate release, and that is commendable.

The album showcases strong fundamentals: tuning and blend are strong for a high school group, and though the voices haven't matured yet, they're still controlled and focused. There are some great solos on here: She's Leaving Home and Misery standing out in particular. The kids also execute difficult arrangements with skill and precision; lush moments in She's Leaving Home and Everything come across very well.

Play It Coy also stumbles. Though the production, by Liquid 5th Productions, is bright and beautiful, the album lacks energy throughout. Even well-performed numbers like Misery and Mercy lack the intensity that the songs and arrangements call for. The background syllables are usually over-enunciated, the "doo doo boh dey doo" bass line in Mercy being a prominent example. Everything is crisp and almost choral, and it doesn't match up with the instrument that is being replicated or create a compelling and original sound. Arrangements are interesting, and probably a blast for high schoolers to sing, but they're often bogged down by goofy syllables and a lack of cohesion. I also wasn't a fan of ending with Back Here: the climactic "a cappella break" seems considerably less effective for ending a song or an album when the entire album is performed a cappella (I'm aware there is a change of texture, but there's not enough of a shift in the energy to really warrant ending the album with it).

With interesting song choices and good production values, The 18 Wheelers have produced an album the group should be proud of. One can only hope that these kids will now go off to college and will have that extra leg up when entering the collegiate scene, because there is certainly some potential for excellence showcased in this recording.