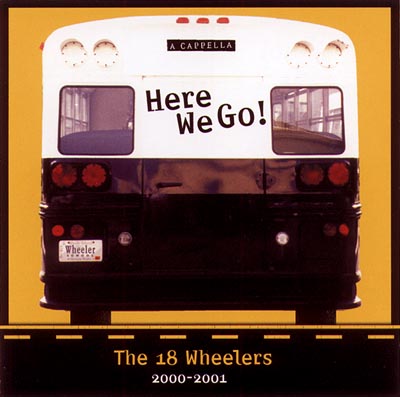 Admittedly, I'm new to the world of high school a cappella. I mean, I know it's out there and I know some of it is mighty fine, but I haven't had a chance until now to experience it first-hand.

If The Wheeler School's coed a cappella ensemble is indicative of the quality of the greater high school a cappella movement, then collegiate a cappella has some incredible talent coming its way. It wouldn't surprise me if albums like The 18 Wheelers' Here We Go started a trend of collegiate groups "recruiting" kids out of high school. Collegiate a cappella musical directors take note: most of them will likely audition for you anyway, but unlike the basketball team, there's more than one group to join and if you want the best, go after them instead of waiting for them to come to you.

OK, so I'm only half-serious about the above (though the concept of an a cappella scholarship singer warms my heart), but I'm not at all joking when I tell you that The 18 Wheelers are as good, if not better, than a whole bunch of collegiate groups performing today. Their faculty musical director, Kristen Sprague, is to be commended not only for allowing the students to explore a broad range of repertoire (Guster, Matchbox Twenty, Arcadelt and Ginastera on the same album!) but for taking the time to create arrangements for the group that clearly demonstrate that she is in-tune with today's a cappella arranging sensibilities, especially for contemporary music.

Ultimately, the credit goes to the students themselves. Of particular note is Marissa Alikpala '01, now a student at Colgate, who does a brilliant job with Dido's Thank You (and thank you to the group for not opting for Eminem's version). A quick search of the web first led me to the fact that Marissa was the Patriot League Rookie of the Year in Women's Tennis for 2001-02, but much to my relief, after a bit more searching, I discovered that she is indeed still singing (whew!) with the Colgate Resolutions. Also worthy of singular praise is Marcus Ricci '02 who should have recently graduated from Wheeler and will no doubt be much sought after as a vocal percussionist wherever he has chosen to continue his education. The tracks that feature his rhythmic support are the best on the album, and those that are without it, while still quite good, are lacking for its absence. And he can sing as well as spit — his solo on Bent more than makes up for an atypically uninteresting arrangement (not by Sprague, by the way). Lastly, there is Rebecca Harrington '04, about whom I'm still shaking my head. It's the "'04" that kills me; this album was recorded when she was at best 1 year out of junior high. Take a listen to the solo on The Blue Bird and try to tell me with a straight face that this singer was a ninth grader! Unreal.

Mind you, not everything on the album is perfect. The middle third of the album is characterized by a radical repertoire shift back to more "classical" material which might be more typical of your average high school vocal ensemble. This work is accomplished if not stellar. The moving lines, particularly in the tenor voices, prove tricky for the guys to handle, and crisp diction is noticeably lacking (the multiple "esses" in Alla Cazza being the most pronounced example), and is only compounded on El Arbol del Olvido by an overbearing chorus/reverb effect. In general, even on the contemporary tracks, the tenors are often insecure, and occasional mushy tuning, unison singing which isn't always quite unison, and rhythmic anomalies creep in now and again.

On the one hand, perhaps it's not fair to mitigate these weaknesses because the performers are in high school. On the other hand, they're in high school, dangnabbit! If they're barely old enough to drive, but they can produce music like this, I think they deserve to be cut a little slack. So sue me.

I went to a little private high school not unlike Wheeler. Girls who could sing came along once in a while, but guys who could sing were about as common as ... actually, I don't remember being impressed by a single male vocalist at my high school. If they managed not to go through puberty in the middle of a song, we thought they were doing pretty well.

There are no Peter Brady issues on The 18 Wheelers' Here We Go, just a couple of guys barely out of braces who solo with jaw-dropping maturity. Zack Packer and Marcus Ricci cook on their own songs, but when they join forces on Parachute, they'll make you swallow your retainer. Both Zack and Marcus were in the Wheeler Class of 2002, and I wish I could be a fly on the wall when they show up in some fortunate group's audition pool this fall. Marissa Alikpala and (unbelievably) freshmen Rebecca Harrington and Felicia Ricci (I guess it runs in the family) show a lot of promise, too.

It's just amazing how these kids put their hearts into performing. Everybody seems psyched to be in the group. They dive into Tears for Fears and classical madrigals with equal gusto. They sing backing syllables like "ba ba ya" and "spazza spazza" as though they are really saying something, which of course they are. You can practically see them grinning across the studio at each other under their headphones.

All that being said, well, they are still in high school, and you can really hear it in the tuning, which is sometimes OK (Bent) and sometimes, well, whack (Thank You; El Arbol del Olvido). Rhythmic misalignment (Spirit Voices), questionable repertoire choices (No More), and breath support problems (House at Pooh Corner) plague other tracks. The complex arrangements and evident goodwill just can't make up for the shaky fundamentals.

This is the first time I've ever given an overall "3" to a high school group, and I hope The Wheelers appreciate that rating for the high praise it is. Sending their album to RARB was a gutsy signal that they want to play ball with the big kids. It may not show on the scoreboard, but as far as I'm concerned, they won the game.

Here we go indeed. The Wheeler School, a private K-12 school in Providence, has produced a singing group to be reckoned with and an eclectic and impressive recording effort. While suffering from some of the usual high school group offenses (inclusion of random classical tracks on a disc full of pop tunes, occasional balance and tuning issues, unformed soloist voices), The 18 Wheelers put out some music which could go head to head with college work.

Some listening tips to get your full enjoyment value:

The energy and camaraderie of The 18 Wheelers comes through strongly; the secret track begins and ends with studio conversations and laughter that is warm and genuine. To turn their next album up a notch, they might want to continue focusing on their tuning and solo work. I would drop the classical numbers as well as the reliance on outside arrangements; the group arrangers are more than capable. Finally, the secret track, seven minutes of odd (and sometimes badly tuned) syllables and chords, was the right idea but the wrong execution. Putting on a markedly different "jam session" as a secret track could be cool if you pick a song that is more listener-friendly next time around.

The liner notes reveal that The 18 Wheelers have performed often with groups like The Chattertocks, Brown Derbies, Dartmouth Aires, etc. It is impressive indeed to hear a high school group who can hold their own against such heavyweights. Congratulations to director Kristin Sprague and her singers for doing so.