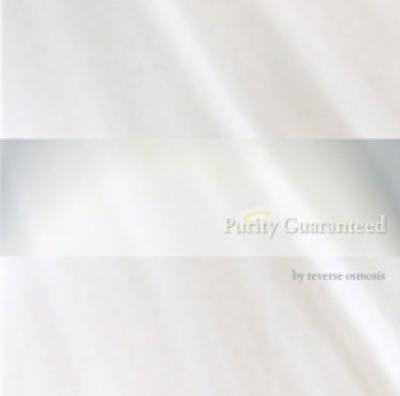 Reverse Osmosis has put out a very solid third album with a few moments of real transcendence.

Bring Me To Life is the best a cappella version I've yet heard, with grippingly tense verses leading into explosive choruses. Casey Heim nails the spoken-word lead on The Distance, and Kevin Simpson's arrangement is a blast. Joanne Highland's luscious solo carries Beck's Tropicalia over another really enjoyable chart by Johnny Herbert. These three tracks are the strongest; I also really appreciated the sliding soprano chords on New Tattoo, Elissa Weinzimmer's assertive lead on Black Or White, and the attention to detail in Jason Monma's arrangement of Gabriel Mann's Lighted Up. The album art is beautiful and creative. And of course, Mann's production is up to his usual standard.

Problems? Not many. Herbert's arrangement of Swing Swing is a little sparse and just a tad cheesy. Despite having turned in a decent solo on that track, Herbert falters two tracks later on Missing The War. It sounds as though he had laryngitis when he recorded it. Ngoc Hoang rescues things with an unusual take on the second verse, and Sam Saletta puts things back in traditional clarion-tenor territory on the third. Black Or White's main riff starts to grate after a few billion repetitions. Impermanent, an original song by Jon King, starts out promisingly but ultimately doesn't go anywhere and lives up to its name in my memory. And Saletta can't quite hack the high notes on the choruses of Lighted Up.

It's not quite a top-tier album, but without a weak track to be found, Purity Guaranteed marks Reverse Osmosis as a group just on the verge of greatness. Let's see what they can do next.

Gushy and processed, Reverse Osmosis' latest release Purity Guaranteed is a snoozer to pass on. Full of pitch issues, sappy and off-key solos, and muddy arrangements, this album is a step back from their 2003 effort, Fifty Million Reverse Osmosis Fans Can't Be Wrong. Dressed in white and posed in the liner notes like they're headed to a croquet match, the 21 members (yes, 21) of the group overcrowd the vocals on nearly all the tracks, creating what is for the most part a cacophony of unintelligible (The Distance), unpleasing (Swing Swing), and cheesy (Black Or White) gobbledygook.

I think the best thing accomplished on this disc is the unpretentious, even bold, move to aca-arrange six artists on the fringe of the alt-pop-rock scene. While the results have been less than desirable and at the least, mediocre, they feel more like they were written merely to make the statement that yes, even Phantom Planet can be done without instruments. To be fair, one song from a newcomer on the national scene is rather successful, but I'm not that surprised or impressed considering it comes via the songwriting, recording, and production of our very own Gabriel Mann. Lighted Up offers the light, clean, and richly-textured background vocals that are a significant improvement over the first nine tracks. While it makes a nice closer, Lighted Up makes me think I've just wasted the last half hour of my life until I reached this track.

Those other nine tracks are hardly the stuff that great a cappella is made of. Ultimately, Purity Guaranteed is a highly frustrating listen. Solos range from Kermit the Frog-like at parts of Swing Swing and Missing The War to lush and almost sexy in Tropicalia. Inconsistent, to say the least. Save for the few high points that keep my ears perked, this album feels schizophrenic in its variety of song selection and arrangements.

A highlight on Fifty Million, the Jimmy Eat World track Table for Glasses rocked with a gritty, confident "emotional commitment" that I thought would translate well onto this more alternative track list, but is still very much lacking on Purity Guaranteed. Like the linen clothes many of the group members sport in their photo, this music is a little too transparent, a little too collegiate hipster. Although generally unenthusiastic about its execution, I like that the song selection here gives Reverse Osmosis a new kind of a cappella identity. I hope that the awkward trappings of this new creative music are soon reconciled with the kind of solos and arrangements found in Lighted Up and in their previous works.

When I first pulled this CD out of the envelope, I immediately noticed how simple and plain the cover art was. It had a calming and inviting effect on me, which can only be a good thing. The halo on the "i" of "Purity Guaranteed" was a little confusing, but I figured that it would be explained somewhere later. Unfortunately, I was confused even more when I saw the dark cabaret style insert. While the overall design of the layout is very professionally done and obviously took a lot of thought, it was constructed in such a way that I looked for some kind of golden thread in the liner notes and the music. This search led me to analyze the lyrics more than I might be normally inclined, and I did find a constant theme of angst in all the songs. Forgive my ignorance, RO, but if there is a greater theme than this I can't find it.

As you can see by my numbers, I have no complaint with tuning and blend, etc. I enjoyed Elissa Weinzimmer in Black Or White and Sam Saletta from Lighted Up the most since their solos drew me into the melody more than the background parts. This isn't a knock on the singing ability of the other soloists. In fact, they were all solid. However, I felt that a number of other singers didn't quite separate themselves enough from the supporting voices' timbre and intensity.

Not being distracted by poor soloists/support, I was able to really dive into the arrangements as a whole and how they related to each other. Although all of the songs on Purity Guaranteed are performed excellently, about half of the arrangements failed to eliminate the inherent repetitiveness of the original, and in some cases introduced their own repetitions.

Some of the arrangements are too simplistic, while others evade that trap through variation, contrast, and quotes of other songs. Swing Swing loses a little of the energy from the original by eliminating vital developmental aspects, by jumping into the full chorus right off the bat, leaving nowhere to go for the latter half of the song, which loops the chorus multiple times. Black Or White is better, cleverly avoiding over-simplicity by using the opening ostinato through the majority of the song for consistency but surrounding it with variation and contrast all the way to the end, including references to Man in the Mirror and Wanna Be Startin' Something in the background voices. The same trick loses some luster in is use on The Distance, California, and Missing the War. California continuously built for the entire song but failed to reach any definitive high point and ended up being another song that relied on repeating a short melodic idea for a majority of the track. Missing the War is filled with full harmonies that pull you right in to the emotion of the song; the conversation style duet in the middle of the song was a nice touch.

I can't help but be jaded from listening to (and performing) so many versions of Bring Me To Life even if this arrangement is one of the most successful I've encountered. There was a good balance of choral sounding backgrounds and electric guitar-y backgrounds, but I wish that more thought had been put into dynamic contrast. I realize the original song is pretty much one long piece of loud except for the intro and that part of this contrast can be found between the band's high energy support and Amy Lee's gentler pleading lyrics, but that doesn't mean that verses can't get softer or that the bridge can't be a big crescendo for example. I also wish that the snare drum had changed to a more open sound to get rid of the slightly muffled feel that the rest of the song ditched somewhere between the first verse and second chorus.

Tropicalia is nice little nugget of a song with a great groove supported intricate Latin percussion. I really liked the imagery in the chorus of New Tattoo. However, it lost its meaning since it comprised the majority of the song. You'll understand what I mean if you say your name one hundred times and end up wondering how that silly string of syllables ever became a word, much less a name.

I couldn't find lyrics to Impermanent on RO's website, so it's difficult for me to accurately describe what the song is about since there are a few spots where I couldn't quite understand the soloist. This aside, Jon King should be commended for writing, arranging, soloing and drumming on this song. It's a laid back ballad simple enough to remember and intricate enough to keep you captivated.

The steadily pulsing backgrounds and soaring solo of Gabe Mann's Lighted Up gave me goose bumps every time I listened to it. The song grows from almost nothing to a huge almost tribal-sounding ending. Although there is no mention of it in the liner notes, I'm pretty sure that Gabe Mann sings a little supporting harmony with Sam Saletta in the later half of the song. Great song; great arrangement; great performance.

For those of who don't use the term Reverse Osmosis in every day conversation this is what it means.

The relevance of this is, in my opinion, is that they hope to push themselves to a place where few other a cappella groups make it. The album has obtained a definite level of quality that should be acknowledged but in the process became predictable. If they keep attracting talented singers and work on developing their arranging ability, then I have confidence that they will pass through whatever metaphorical membrane they choose. Keep up the good work.