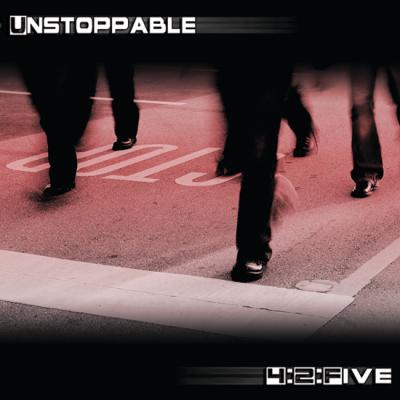 Thacher-esque VP, soaring tenor leads, rich pop chords and tight boy-band production make 4:2:Fve's originals and covers a quarantine zone of highly infectious energy. Purists will hate the processed, studio-savvy sound, but everyone else will bat their eyelashes lovingly at how radio-friendly this group actually is. For a cappella, this is more than friends; it's radio-friendly with benefits. Here's hoping they tie the knot.

If 4:2Five can keep a solid line-up around there are only great things to come. But even if that's not the case, and Unstoppable is only a studio-created snapshot of the group that could have been: this is still a must have CD that's certain to grace both the "workout" and "road trip" a cappella playlists you've been aching to update. Buy it. Rip it. Eat it up.

The debate over what constitutes progress for contemporary a cappella music rages on but it takes an album like 4:2:Five's Unstoppable to remind me that too much so-called "progress" is not always a good thing.

It was fascinating for me to review this album immediately after reviewing the Stanford Fleet Street Singers' Fleet Street, an album imbued with originality and creativity — staying within the framework of a cappella while trying to push the envelope a bit in terms of what the contemporary a cappella audience wants to hear, all at once. We've come to expect similar work from The House Jacks, m-pact, baSix and others over the last 5-10 years.

But Unstoppable is likely to generate much of the same discussion that surrounded Ball in the House's The Way It Has to Be a few years back. On the surface, this effort from 4:2:Five is similarly impressive, featuring a slick, seamless blend, wailing soloists, killer V.P. and an overall sound that is polished and professional. But underneath all of the surface brilliance is a bothersome blandness to the music these talented gentlemen have chosen to create. Especially on the first half of the album, they toss off infectious, upbeat originals like Baby, I'm Waiting, The Rules and Unstoppable which, while engaging, sound like they've been lifted from the any of the numerous boy bands that became popular in the late '90s. Strip this music down to its bear essentials and you're left with decent songwriting, generally vapid lyrics, rather simplistic vocal arranging, and tight, energetic singing that has been quite skillfully computer-processed, and set to a whirlwind of computer-manipulated sounds from one or more vocal percussionists. Mind you, this is not a tirade against folks like Bill Hare, Gabriel Mann, Dave Sperandio and, on this album, Layne Stein, who have a mastery of studio wizardry and aren't afraid to use it. But when the tricks really ARE the music, then the music is dull to me. A cappella that is truly so undistinguishable from instrumental pop music may still make for enjoyable music but it makes for boring a cappella, at least for me.

To be fair, there are a few exceptions: Any Note Will Do features a nice balance of lead, background and VP on a catchy tune that is reminiscent of a Sean Altman original. And the two covers at the end of the album are really the most enjoyable tracks on the album. The CARA nomination for Stayin' Alive is well-earned and Winter Wonderland is also delightful. Perhaps because the group is freed from the pressure of adding heft (in the form of VP wizardry and studio trickery) to their rather vanilla originals, their covers show a decidedly more "vocal" approach, where the arranging and interpretation come first and the production work only serves to embellish rather than overwhelm the music.

Truth be told, an album like this really challenges the limits of the RARB grading system. This is a very good to excellent album, to be sure, but (for most of it) it's also wholly unrecognizable as an a cappella album at all (!), and that's a strike against it in my book. My grades above attempt to illustrate this dilemma but at the end of the day, it's an imperfect system. Suffice it to say, these guys make good "popular" music but for me, generally uninteresting a cappella.

Plenty of discussion circulates in the a cappella community regarding the lack of original songwriting in the genre. It's hard to disagree in principle with the notion that we would all be better off with more of it. Based on what I heard from this album, I say to all: Careful what you wish for.

That is to say, I have a sneaking suspicion that if all the a cappella singers were to start writing their own material it would sound disturbingly like the vapid, soulless original pieces on 4:2:Five's Unstoppable. All the cliches and trappings of boybandom so perfectly skewered in Da Vinci's Notebook's Title of the Song rear their ugly heads throughout most of the album. Just when you think it's over, another vague, insipid lyrical cliche you've heard umpteen times from fledgling songwriters (e.g. "all this pain", "sweet caress") appears with ferocious cheese. Put the pen and paper down, fellas! Hire somebody!

If you can get past the above (i.e., you are a girl 15 years old or younger) the album is, well, debatably superlative. The leads are strong, the blend is good. The production is rich and lush with lots of tasty effects and ear candy. Utilizing a host of unusual atmospheres and metallic/robotic sounds, the title track, Unstoppable, is the most creative and idiosyncratic of the disc.

At their best, 4:2:Five pulls off a credible Rockapella imitation on a few tracks (e.g., Any Note Will Do). In fact, under laboratory conditions, the casual fan might mistake much of the vocal percussion, arranging, and to a degree the ensemble sound, for an actual Rockapella recording. While Rockapella's sound is certainly a respectable one, it is also used so consistently that the disc suffers from a sameness of sound. The "repeat listenability" score is duly reflective.

It's hard to recommend the disc with complete sincerity. On one hand, tracks like Slowly Slowly Stop have a big loud sound that will please any ear. Musically, the disc is robust and powerful. On the other hand, nauseating lyrics ruin some otherwise great performances. What to do?

How about this? If you still listen to 'N Sync and Backstreet on a regular basis, buy this album. Otherwise, consider yourself warned.