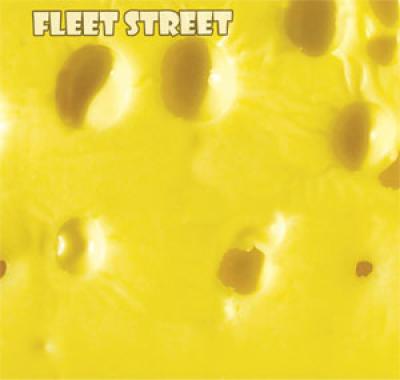 All songs written and arranged by Fleet Street members and alumni. Smoke some of that, you so-called "pro groups". Some rock, some jazz, some really funny comedy — all in a tightly engineered, large group, collegiate sound. I've waited a long time for this: the all-original collegiate release. Although the average track score was a "4", overall this album is a well earned "5" with its originality score tipping the scales.

Three songs stand above the rest. One is Life, whose scope is nothing less than the story of a man's entire miserable and comic life from birth to death. Two is the adorably jazzy romp, Pokey the Penguin. This is the story of a socially challenged penguin and his short but successful quest for true love. And lastly, is the comedic song of the year, the singularly titled Everyone Pees in the Shower. Amazingly, the delivery and clever lyrical twists elevate this track from the merely sophomoric to laugh out loud funny. This track is destined to be a cult classic.

Even on Fleet's less outstanding tracks, the writing is just as solid and less cliché than most tracks out there. The stories are so much more interesting than the typical baby-I-miss-you-cause-you're-gone crap clogging the airwaves. Pressing questions will be answered: What jobs would the Greek Gods take right now? How can dating a Barbie doll improve your life? What makes for a good legal defense? Even the rhymes are clever: "You zapped me with a current. To get the life insurance." You gotta hear it.

Although Bill Hare's engineering is notably good, a few production and arranging choices make the songs consistently a little more busy than they need to be. In fact some of these songs seem better suited for a less collegiate arrangement (Losing Laura, Silver Jacket).

Bottom line, Fleet Street is a rare jewel in the world of collegiate a cappella. Buy it while you can.

For nigh on forever, Deke has been urging collegiate (and professional) groups to consider a shift to performing some, if not entirely, original material lest modern "pop" a cappella go the way of the cover band — a novelty to listen to once in a while, but not anything anyone wants to buy or consider seriously and artistically.

With their latest album, the Fleet Street Singers of Stanford have answered Deke's call with probably the most gutsy and original collegiate album I've listened to in almost 20 years of active collegiate a cappella listening.

Always wacky and zany, Fleet Street now seems to have set up camp somewhere between the eccentric intellectualism of The Bobs and the somewhat more boisterous, more simplistic Da Vinci's Notebook. The result is a sometimes spot-on, sometimes uneasy mix of satire and musical sophistication, of parody and compositional originality, that is ceaselessly entertaining if not always entirely successful. Songs like Life-Sized Barbie, the super-twisted Love Song and the marvelously witty Olympic Recession find just the right blend (no pun intended) of humor and musicianship (both in writing and performance) while other tracks like Everyone Pees in the Shower and Lawyer are just slightly off the mark, sacrificing melody and arrangement for the sake of jokey lyrics and/or stretching the joke itself a bit too thin. Pokey the Penguin is deceptively plain yet absolutely adorable, striking just the right tone of seriousness and silliness, while Life is a gimmick song whose mushy arrangement undermines its humor.

Then there are a few songs that fall outside of the above categorization — originals that are trying to simply be original — and honestly, I wish Fleet Street had included more of those. All Original offers a snappy beginning to the album (The King of Plumland is really just an intro) with a refreshing, stream-of-consciousness lyricism that avoids convention and cliché as well as an infectious beat. And right smack dab in the middle of the album are the extremely impressive Losing Laura and Clear Skies: the former a gut-wrenching love song of sorts melodically based on the second movement of Beethoven's 7th symphony and the latter a wonderfully interesting attempt to write a sort of post-modern jazz standard a la Rodgers & Hart. I have small quibbles with both songs, but the sheer creativity and originality made me sit up and listen in a way that most music, a cappella or otherwise, rarely does.

I would be remiss if I did not single out my vote for the star of this album, that being lyricist Mike Solomon. While I feel compelled to point out to Mike that "never rude" and "afterwards" don't quite rhyme (and it sounds like he wants them to in Life-Sized Barbie, and neither do "current" and "insurance" (in Love Song), those are about my only complaints about the words, which seem equally informed by the cadences and meter of Eminem as they do by the alliteration and internal rhyming of Sondheim. Mike might be peeved at me for not calling him a composer/lyricist/arranger/co-producer/co-mixer as he contributed in those roles as well, but without question, lyrics are his strongest suit and the ones on this album, in many cases, are ingenious. And while I'm singling folks out, there's the studio work of Bill Hare which, as usual, is magnificent. Kinda wish the group and/or Bill had featured a bit more sensitivity to dynamics (there's a mezzo-forte or louder quality to almost everything) but in the end, the post-production is polished, thoughtful and serves the music without distraction. (And Bill, I could swear that's a Hammond I hear on All Original but I know it's not).

All in all, an exciting new direction for collegiate a cappella and an album you should buy not just to laugh and not just to enjoy, but to encourage other groups, especially on the collegiate level, to follow the example of risk-taking and originality in a cappella.

It is not every day that a college a cappella group has the gumption to put an original song on its album. Most such original songs are bland mediocrities, kind of Toad the Wet Sprocket meets Jann Arden at your local Wal-mart. Occasionally you'll get a pop gem from the likes of the extraordinarily talented.

You probably wouldn't believe me. Indeed, I have a hard time believing me. This album would make so much more sense if they'd gone out and hired a bunch of professional ringers to do their songwriting, paying them handsomely to make up for taking all their credit. My suspicions aside, I will give Fleet Street the benefit of the doubt for the remainder of this review.

If I could, I'd give Mike Solomon's Olympic Recession about a 73 on a scale from 1 to 5. If you've ever wondered what happened to the Greek gods after it became apparent that "God had a monopoly on modern-day theology", you've come to the right, um, song. They fell into an Olympic Recession, of course, and ultimately wound up getting "entry-level, minimum-wage jobs". To cite just one example, "Hades was working at the Taco Bell / Zappin' burritos with the fire of Hell". This is dork humor at its apogee, and an irresistible Latin groove elevates this track to absolute perfection.

Much of the rest of the album is almost as strong. Solomon's All Original contains some beautifully twisted harmonies; his Pokey the Penguin is a bizarre but heartwarming children's tale sung with an absolutely straight face; and his Life is a masterpiece of word painting, depicting a pointless, mundane existence from cradle to grave by going around and around the circle of fifths like an overweight hamster on an exercise wheel. Doc Edge's Clear Skies is a gorgeous jazz ballad that easily could have been written by Cole Porter. (Yeah, it's that good.) Lords of A Cappella, by Edge and Rory Everitt, would make Tenacious D proud: "We don't need guitars / To drag them through the mud / Our blades of aca-steel / Will drink their aca-blood!"

Life-Sized Barbie, by Solomon, and Everyone Pees in the Shower, by alumni Jason Mayland and Martin Puryear, are puerile, immature delights. But they're not simplistic in their childishness; Bakhtin would have a field day with these songs. They're novelistic, dialogic, and multi-voiced; the background vocalists will harshly condemn the lead vocalist/narrator/protagonist one minute and go right back to enabling his neuroses with their reinforcing oohs and ahhs the next. In Life-Sized Barbie, when Avnish Deobhakta sings, "Well, I may get strange looks around campus / And I haven't seen much of my friends", the rest of the Fleet Street Singers reply, "That's because they think you're a loser!". But Deobhakta goes on to rationalize his isolation in the next two lines — "But Barbie says I shouldn't worry / That I'm cuter and smarter than Ken" — and he wouldn't be able to do so without the rest of the group providing the chord sequence. Don't fret if your eyes are by this point glazing over; one certainly does not need arcane Russian literary theory to enjoy these tracks.

The album does contain a couple of missteps. Lawyer is standard-issue, poorly tuned barbershop (it may not qualify under SPEBSQSA rules — honestly, I have no idea — but that's the genre it's clearly designed to evoke), and its tale of judicial corruption isn't particularly original. Losing Laura inexcusably distorts its quote from Beethoven's 7th Symphony by flatting one of the notes in the classic melody; I'm also quite sure I don't want to know what the vaguely disturbing lyrics are about. And Teen Angst is a somewhat clever commentary on the horrors of an upper-middle-class, suburban upbringing, but it doesn't try to say anything that Ben Folds didn't already say better in "Rockin' the Suburbs". (How this track got the CARA humor nomination over Olympic Recession is beyond me.)

Also, and this is the reason I've lowered the album's overall score, some seriously bad blend mars many of the tracks on Fleet Street, as though the group had spent too much rehearsal time writing songs and not enough singing. I really hope that the New York Voices or The Idea of North cover Clear Skies, because Fleet Street's performance doesn't do justice to an utterly amazing song. This isn't Bill Hare's best work either, though that's like condemning Let It Be for not being Sgt. Pepper; the mix is sort of noisy and unfocused.

RARB requires a certain amount of objectivity in scoring, and I can't give an album with blend issues this rampant a "5". But I also can't say that I really care about the blend while listening to it. The Fleet Street Singers have put out a brilliantly creative disc, and it is absolutely a worthwhile purchase.

CDs are $15+$3 shipping and handling. Please contact our album chairman at albums@fleetstreet.com or see their web site for more information.