Weihnacht in Österreich (Christmas in Austria) - a cappella (2004) 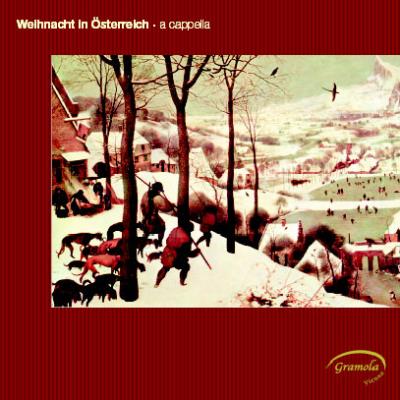 Maennerquartett schnittpunktvokal & Kvartet Vita; perhaps it doesn't quite roll off the tongue. I recommend passing on trying to pronounce these names and instead listening to this lushly toned and oftentimes hauntingly delicate classical Christmas collection.

Unlike so many Christmas releases, Weihnacht in Oesterreich has the virtue of not being even slightly cheesy. It's traditional, to be sure. But something so authentic and musical is a breath of fresh air after the tripe Americans are force-fed beginning each Thanksgiving.

The painstakingly detailed phrasing is a pure delight. The tuning and vibrato match is nothing short of exceptional. So often listeners must choose between the soulless, electronically straightened, precision pitch of pop music and the warbly drunken tractor-trailor pitch centers employed by groups of wanna-be Met stars using their not-as-bel-as-they-think-canto tones to strut like peacocks. Not so with this release. Rounded and resonant, each word is sung as if of one voice, pure and free.

The production, like a careful matador, does its job and steps aside gracefully so as not to create a mess of itself. The sound is clear and natural as if close miked, but the natural acoustic of the room is seemingly left intact. Thankfully, the mixing leaves enough dynamic to enjoy the music's depth without forcing one to reach for the volume knob.

You won't tap your feet to these tunes. You won't sing along. But as Christmas approaches, consider lighting a candle, slipping into a bubble-bath and sipping wine as you bask in this collection of dulcet tones.

Weihnacht in Osterreich, featuring the all-male quartet Schnittpunktvocal and the all-female Kvartet VITA, is best considered as an "archival" album — created with the very focused goal of documenting classic German Christmas carols, while also including music from the Slovenian-speaking population of Germany as well as from German-speaking enclaves in Eastern Europe.

Specifically as such, it is quite successful. Both quartets are wonderful, featuring beautiful ensemble singing with lovely tone, big, rounded vowels, spot-on diction and seamless blend. The men are somewhat reminiscent of the King's Singers though there is a certain something — call it "vitality", perhaps? — with which the King's Singers imbue even their least accessible music that isn't quite as palpable here. The ladies are similarly satisfying with a resonant contralto II in Breda Bider providing a solid foundation on top of which the other 3 build a soaringly sweet sound (yikes, I just noticed the alliteration…sorry...ahem, excuse me.) The liner notes include the lyrics for each piece as well as two introductory short essays offering some background on the material covered. I was particularly grateful for the latter since, while I enjoy Christmas music as much as the next guy, some context was desperately needed to help me appreciate 25 tracks that sounded much the same one to the next.

Though I'm not known for brevity, that's about all I have to offer on this album. If you're looking for a first-rate audio documentary of the music described above, then this would be a good buy. But short of that, I can't even recommend this album to those who might enjoy an album of Schubert lieder or Renaissance madrigals or the like. With virtually all of the material falling under the heading of slow, lilting, soft, classically-arranged Christmas carols, this is soothing, beautifully-rendered music to be sure, but staying awake for the duration will still be quite a challenge.

What do you say about an album that is rendered beautifully, but is so dull that you forget about the first twelve tracks as you are listening to the last thirteen?

The programming of Weihnacht in Oesterreich is at fault. In celebrating, archiving, and preserving Slovenian and German language Christmas carols, the male quartet schnittpunktvokal and the female quartet Kvartet VITA collaborate on a holiday recording of traditional folk tunes in a contemporary style.

And it has bored me to tears. Which is unfortunate because I genuinely like folk songs, and both groups have very capable singers. The men are especially resonate in the lower and mid voices on most of their tracks. The women evoke an ethereal tenderness in their selections.

And it all sounds exactly the same: dynamics, settings, tempos — you name it. From track one to track twenty-five (get it, it's a Christmas album), except for the alternating male and female voices, a person would be hard-pressed to distinguish one song from another. My ears tuned in on the bookending Stille Nacht tracks and Es ist ein Ros' entsprungen, songs I sang in college.

Only twice do they combine their talents: on Vom Himmel hoch, da komm ich her, which is lovely and blends the voices nicely, and on the slightly cacophonous closing Stille Nacht.

I am not conversant in German or Latin so I'm not sure if my Anglicized training is the culprit, but everytime schnittpunktvokal would sing "Alleluia" (written in the liner notes as "Alleluja") I cringed. One, the accent was on the second syllable and not the third (as has been drilled in my head for the past year), and two, that second syllable was pronounced as "lee" very stridently, instead of the softer "leh". Picky, yes, but it got me.

Let's not mention the hidden "track" tagged on at the end of an already long album.

If you are an archivist or enthnomusicologist, Weihnacht in Oesterreich could be your cup of tea. There are better choices for everyone else.