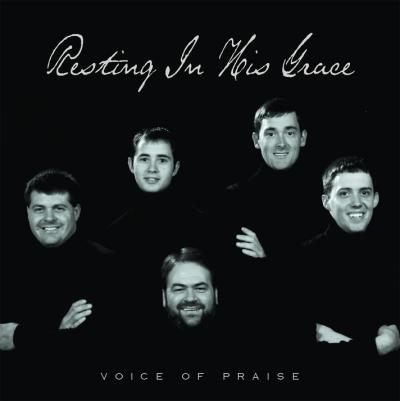 Only at RARB does a nice, Jewish boy like me get to review three albums in a row of sacred Christian music. Oy, what would my mother say?

Actually, I have a real affinity for this sort of material. Having sung quite a bit of it in college and, my 13 years of yeshiva notwithstanding, I think I can recognize the good stuff when I hear it.

That said, Resting In His Grace from the all-male quintet Voice of Praise is not entirely dissimilar from "Weihnacht in Osterreich", the last album I reviewed. The music on this album is not strictly Christmas music, but what bothered me about the former album bothers me here as well. The gents of "Voice of Praise" are lovely, trained singers with careful diction and phrasing and their sound, with the aid of quite a bit of reverb, is lush, full one. If there is a quibble with the blend, it is its tendency to be bottom-heavy, with the rumbling bass of Ben Miller leaving little chance for the high tenors to shine through. Finally, on The Sands Of Time Are Sinking, we hear the sweet, pure countertenor of Lyndon Yoder by itself and it's a beautiful, too infrequent moment on this CD. Yes, there are a few tuning hiccups here and there — particularly in arpeggiated or melismatic moments — but the singing generally is quite good.

What keeps me from giving this album more than a polite compliment are really 2 issues. As with the aforementioned album of German Christmas carols, there is a sameness of sound to this album that becomes monotonous already halfway through. Some of the arrangements, especially the two by Tim Rumsey, do venture into interesting harmonic territory, albeit with varying degrees of success. But the spirituals sound virtually the same as the classics, which sound the same as the somewhat more modern (or at least more recently composed) pieces. As such, you might consider lifting one or two tracks for a holiday mix CD to play in the background in your home or office around the holidays, but listening to the entire album from beginning to end is a bit of a chore.

Secondly, in reading the brief liner notes and listening to these men sing, you find an unmistakable reverence that they have for the music, its meaning and its intended purpose. That's commendable but as engaging and interesting listening, it works to the disadvantage of the listener unless you share the faith and devotion of the singers. I'm a huge fan of Joshua but the arrangement this group has chosen has a complexity that undermines the song itself — it/they almost refuse to settle into the groove that would whip the faithful into a frenzy. Ditto for Strength To Stand where I wish the dotted rhythms in the refrain had a little more zip and bounce to them. Sure, this is religious music, but this is also Gospel music, and spirituals rendered too formally are robbed of all of their character and excitement.

So my mother can stop worrying. I won't stop listening to this sort of music, but this isn't an album that I'll likely revisit even when I'm hangin' with my gentile posse at Christmas.

Voice of Praise, a quintet from Virginia, has offered a musically solid but dull collection of hymns and spirituals in Resting In His Grace.

To be sure, they're quite well rehearsed. Tuning is just about flawless, with only the occasional unison line failing to lock. Blend is OK, never offending and never wowing. Interpretation is where the group disappoints, offering little in the way of phrase shape and dynamic contrast. This combination of good intonation, decent blend, and monotonous delivery is a common one in a cappella, and if one were thus to conclude that there is little to distinguish Voice of Praise from similar ensembles, one would be quite correct.

Unsurprisingly, then, much of the repertoire is quite basic, including many three-chord hymns likely intended for congregational singing, not for a group of some talent like Voice of Praise. Several tracks were arranged by second tenor Jon Zehr, and they are the weakest on the album, voiced far too closely (a problem I find myself griping about far too often) and employing many inappropriate parallel fifths. The contrast with the songs arranged outside the group is striking. Choral schlock-meister Don Besig, a name I thankfully had not encountered since middle school, wrote the closing track, Go In Love, and it's as bland and insipid as I would expect. The only real musical interest comes in the middle of the album. Robert Sells contributes a nice interpretation of my namesake spiritual, Don Marsh adds some interesting twists to Hank Williams' I Saw The Light, and Tim Rumsey, about whom I must find out more, offers two brilliant and beautiful arrangements, Amazing Grace and Rise Up Shepherd. Voice of Praise delivers these quite credibly — with the exception of Rise Up, whose jazzy chords need to shimmer but don't — which makes me wonder why they spend the rest of their time on simplistic music.

This is a decent but undistinguished disc. Take it or leave it.

Every a cappella group must decide, at some point, to balance tuning/blend and energy. It's tough to stay in tune if your part bounces around all over the place, but it's hard to infuse your music with energy if you're singing "ooh" for an entire song. It's not impossible to overcome this problem — there are many groups that have. Voice of Praise just isn't one of them.

Most of the arrangements on the album are mediocre, glee club-style settings: certainly nice, and certainly forgettable. The four tracks arranged by a group member bookend the disc, but are sadly among the worst offenders. Arrangements like these waste the group members' talent; the ease with which they sing these songs borders on boredom. In the middle of the album, where you can find the more upbeat, complicated songs, their voices lighten up a little and they show just how much they love the music. But then, for the last four tracks, they settle back into that comfy chair called Homophony — and interest quickly wanes.

Don't get me wrong: the group is quite good. Their tuning is more or less impeccable, their blend immaculate. It's rare that I hear arrangements like these done so cleanly and professionally. But "clean and professional" is all it is: most of the solos are so square that every tiny mistake becomes noticeable, and the voice leading in most of the arrangements is so predictable that any wavering gets amplified. They play it safe, and it sounds ... safe — good, not great.

When they break away from "safe" and venture into "interesting", they lose a little of their tuning, and their blend gets a little off. But you know what? I don't really notice, and I don't care. It's worth it. If they get beyond their comfort level for a while, I think they'll soon find that not only will the tiny mistakes seem to disappear, but they'll be able to share a lot more of their love for the music and its subject matter.

There is absolutely a time and a place for block-chord, choral music. And Voice of Praise does it as well as anyone. But this album is meant to be a "ministry", as the liner notes indicate; the singers could pull a lot more people in if they would push a little more of themselves out.