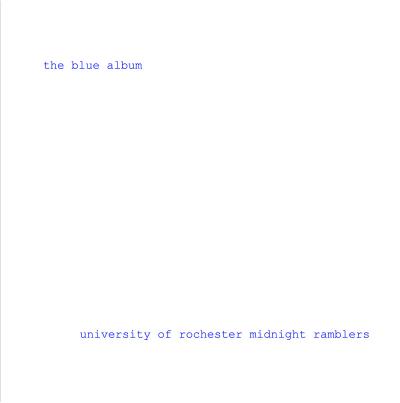 The Blue Album will likely bring a smile to the faces of the Midnight Ramblers and their fans. It has variety and shows these young voices doing what they do, covering various genres, being silly. But though there are some enjoyable moments, overall it's a clear pass for the rest of us.

So what fell short? The arrangements, the syllable choices, the intonation, the blend, the rhythm, and the soloists, with a few exceptions. But in all fairness, once pitch, blend, and rhythm are off, even a little, it's pretty tough to appreciate the better parts of the song. You can note what went well and what didn't, but you can't do much to get back in the mood of the song. That's a pervasive problem once the first track finishes.

Interestingly, I think in a live concert, these performances would be much more tolerable. But for an album, you must find the happy medium between practice and autotune. It's a fact of life: standards for intonation are highly demanding. Nothing beats the perfect intonation of singers who can perfectly align those overtones. But in the absence of sufficient skill level, autotune is a necessary evil to simply achieve listenability.

But assuming the CD had been well-intonated, blended, and timed, the arrangements would have remained uneventful and the song choices less than exciting.

This isn't a bad group or a bad recording, but the bar has been raised by technology and the major financial resources provided by colleges and "angels". From cheap printing to cheap recording, The Blue Album takes a bit of a beating when compared with contemporary fare.

A phrase I used to believe in was "The third time's a charm." In three months I'll begin my third year of reviewing for RARB. My 33rd birthday was a transitional point in my life that called for some extraordinary changes and opportunities. I've established high expectations for anything that happens to me in threes.

So with shock and anticipation I received my third recording to review by University of Rochester Midnight Ramblers. Shock because it still amazes me when groups are able to release yearly albums. Anticipation, because I thought that The Blue Album could be the album where the Ramblers pull it together and produce an album better than All Sales Final and Alternate Route. I should have known something was amiss when they didn't keep up with the alliteration.

The good: The group obviously spent some money on this recording; the studio effects are a vast improvement over their previous recordings. There are nice, full-bodied sounds when called for and subtle tweaking that enhances rather than detracts from the listening experience. Even the group's overall tuning is the best that I've heard it. For the most part, they've mastered some fundamentals which give them a solid foundation.

Also, Tom Kraus as a vocal percussionist. He doesn't have a wide arsenal of sounds, but what he does, he does well. There is never a point that he sounds inauthentic, or that the pocket is going to waver or falter. The soloists are stronger across the board, but none standout. Matt Roe's sky-high tenor on The Darkness cover "I Believe…" is impressive though not inspirational. Tribute has its funny moments. James Kwon has a lovely voice.

The bad: the improvements seemed to have completely sucked the energy and zest out of the group. This is not the same group that I laughed at (in a good way) because of their creative arrangements. Most of tracks could have been written more than a generation ago with the amount of imagination put into them. Gimme Some Lovin' is the worst culprit and colored the rest of my experience with the album. I wanted to Hurt myself listening to the Nine Inch Nails cover during the "bow wow wow" sections. Gah, Hurt could have easily been the best track on the album until those misguided moments.

EVERYONE: look at your charts, if you put the syllables "doo" and "wah" beside each other, know that you are creating a distinct sound that harkens back to a more simple time. And syncopation is almost always preferred over not having any. There are no funny off-color lines added to any of the songs. I miss them.

The individual tracks are better than they have been in the past because of the improved recording techniques, but the album as a whole leaves me feeling a bit "blue". If you've never heard the Midnight Ramblers before, the album sounds great, but in context it's a slight disappointment.

I never quite understand why an increasing number of collegiate a cappella groups find it necessary to release an album every year. Doing this forces you to record every song you learn and does not give you ample time to truly make a great album. It seems as though groups would just rather put out any old album than put out a good one.

The failure with The Blue Album, The Midnight Ramblers' fifth album in six years, starts before you can even open it, with the bland and boring cover art, or lack thereof. The blank white cover with sparse blue text does not exactly inspire an impulse purchase.

The product inside only mimics the cover's shortcomings — it is bland and boring. The majority of the songs sound empty. While there are 12 singers listed in the liner notes, the songs sound as if there are only six guys singing. The album lacks the drive of a good rhythm section. If there are three basses in the group, why is there only one on each song? Why is there percussion on only five of the 10 tracks? The percussion was good when it was there (it's no surprise that the better songs are the ones with percussion).

The Blue Album could have used better production and mixing. This doesn't mean that the Ramblers had to succumb to the evils of effects and sacrifice their more "live" sound. Simply better production work could have fixed many of the problems. The sound levels of the parts are not mixed well — the wrong parts are too loud or too soft (backup parts were too prevalent, and the soloists sometimes were swallowed in the background).

There were also many tuning issues throughout the album. This is another thing that could have been fixed in the studio with better production and mixing.

The most disappointing track on the album has to be When She Loved Me. The original is such a simple, beautiful song. The arrangement was just too much for its own good. Sometimes simple is okay, and this would have been the right situation. But this song was out of tune and dragged too much.

The best songs are Renegade, although it seems an odd choice for the opener, Gimme Some Lovin' and "Nickelodeon Medley." It's far from perfect, but "Killer Tofu," "Doug" and "Salute Your Shorts" are just so damn fun!

There is one good thing that comes out of The Blue Album — soloist Tony Vargas (although, for some reason he is credited as Anthony Vargas on "Hound Dog"). Vargas' desperation and oomph really drives the group on Gimme Some Lovin'. He seems to understand that no one outside of Las Vegas can ever channel the King, so Vargas sings Presley's "Hound Dog" (the second song in the Elvis Medley) his own way, and it works quite nicely.

I also have to show some respect for I Believe In A Thing Called Love soloist Matt Roe. The song itself lacks the energy of The Darkness, but Roe does a valiant job on one of the tougher lead singers to cover in modern music.

From this recording and their success in the ICCAs, I can only deduce that the Midnight Ramblers are one of those groups whose success in live performances doesn't translate well to studio recordings ... and there's nothing wrong with that.

For ordering information visit the group's website or email them at ramblers@mail.rochester.edu.