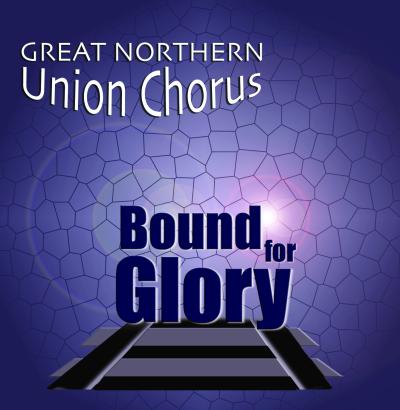 A few facts will help you get a better sense of the Great Northern Union Chorus (henceforth referred to as GNUC) before I really begin. They are from Minnesota. They are a 70-man strong a cappella chorus. They sing a mix of spirituals and traditionals. In barbershop arrangements. I could let you run with the stereotypes and you'd probably have a reasonable sense of what this album sounds like, but GNUC deserves a bit more effort than that.

I've never been a big barbershop guy, nor a big big-chorus guy, so the fact that Bound For Glory kept my attention is a testament to GNUC's competence. These guys can sing. Most of their tracks are well-tuned and energetic. While most tracks are ensemble-sung, an impressive soloist soars from the crowd in the midst of When the Saints Go Marching In. But overall, Bound For Glory is a solid, but unspectacular outing. Enough mistakes crop up on a remarkably short album (30 minutes in total) to mar the sense of consistency (e.g., problematic tuning in God Is My Rock and Ave Maria in particular). And while the chorus is reasonably strong, its size makes it more difficult to achieve a real emotional connection with the listener. There were a lot of pleasant moments but few instances of true beauty.

GNUC has an undoubtedly strong fan base, and has seen some reasonable success in the competitive arena. So my comments here should have less bearing on the target audience for Bound For Glory. For their existing devotees and those of the large-group barbershop persuasion, Bound For Glory may bring more glorious highs than the plains of pleasantness I found.

The Great Northern Union Chorus (GNU) has a distinct advantage over every other group I've reviewed: they have three times as many people. At 70 singers strong, their sound is big. Even their version of quiet is a big, powerful quiet. Briefly peruse their website, and you'll see that their members appear to be big guys.

Of course, when you take 70 corn-fed Minnesotan men who can sing in tune really well and put them in the same group, the result is something powerful. Nearly every moment on every track of Bound For Glory is sung with intense precision. Yet, the album's true charm is its underlying bouyant, carefree energy. GNU should be commended for avoiding the sterility that can sometimes come with mind-numbing perfection.

The album is not all GNU: there are two other small ensembles that contribute to the album, Happiness Emporium and Four Voices. The groups are great, but are comparatively less intense and rich when juxtaposed with GNU's behemoth chorus sound.

As the title and track-list make obvious, the album itself contains primarily religious-themed music. Fortunately for this reviewer, the religious aspect to the repetoire is very, well, light. It eschews preachiness at all turns. The arrangements are fun, barbershoppy and homogeneous. It helps that most tracks are fairly short in length — around two minutes long. The longest is less than five minutes (which is fine because it's Biebl's Ave Maria). The point is, the disc would be enjoyable to the non-religious listener.

That being said, the practical reality of an album such as this is that the primary sales are usually limited to folks who see the group live. Fortunately, GNU is so big that even if only friends and family were to buy the disc, that's quite a few sales in and of itself. Of course, I am not trying to discourage you. If beefy barbershop is your bag, then don't hesitate to buy Bound For Glory.

I have never cared much for the production vs. purity argument that all too often pops up on the RARB forums. To me, it matters little if a group records live, flaws and all, or glosses over each and every voice part with a heavy coating of effects. In the end, a good performance should outshine all, but with the intentionally destructive or truly oblivious engineering on Bound For Glory, the Great Northern Union Chorus proves that point to a tee. While it was this album's plain-as-rain production that initially struck me, the truly inspired realizations of religious hymns and gospel standards are what kept me listening and are truly the meat and potatoes of this enjoyable album.

As stated, this album won't be winning any awards in the technical categories. Whatever the specific elements of production, the overriding sound here is that of a choir singing in front of a decent microphone, there to pick up whatever sounds drift its way. There are drawbacks: at times the group seems a bit murky and distant (

And what wonderful singing it is. Hailing from the Twin Cities, this all-male choir boasts a hearty, invigorating sound you would expect from a group of Midwestern gentlemen: this is genuine, salt-of-the-earth stuff. Capable of moving through a wide spectrum of emotions, the Great Northern Union Chorus winds up to tuneful, excited frenzies on tracks like Swing Low/Swing Down Chariot and When I Lift Up My Head, only to float back with hushed, nuanced turns on Ave Maria and Let All Mortal Flesh Keep Silence, without ever sounding insincere or contrived along the way. I'm not a religious person really, but I'd be lying if I said these songs didn't get me a little roused up.

In addition to the talents of the Great Northern Union Chorus, Bound For Glory features two tracks (Run, Run, Run and Nearer My God To Thee/I Need Thee Every Hour) by the award-winning barbershop quartet Happiness Emporium. Not only are these two tracks quite good of their own accord, they underscore an interesting and perhaps not always apparent parallel between traditional barbershop and gospel arranging. Nearer My God To Thee/I Need Thee Every Hour in particular bares an earnestness that is almost utterly placating (the track is marred by a couple of choppy edit jobs, one of the only cases on the album where the unremarkable production actually does demerit the vocal performance).

It would be interesting to see what kind of album this group could offer if they really upped the ante on the production side. If anything, they might come up with a product with more universal commercial appeal. I wouldn't recommend this album to those who are production picky, but if heartfelt choral music pushes your buttons, you're likely bound to find this a worthwhile listen.