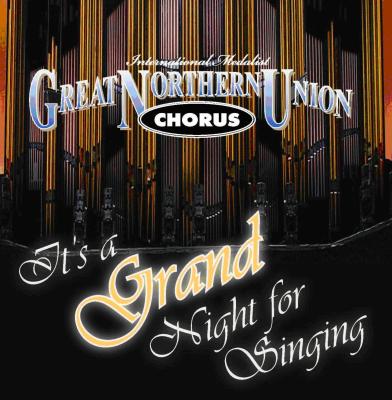 It's a Grand Night for Singing, the latest album from the Minnesota-based Great Northern Union Chorus (GNUC), is another heaping plate of steak and potatoes a cappella from these seventy corn-fed Midwesterners. GNUC sings with conviction and commitment and a palpable enthusiasm that suffuses both ballads and upbeat numbers. They serve here a hearty dish that easily fills you up, even if the flavors taste slightly bland by the middle of the meal.

This is a men's choir through and through, with the best moments coming from the rich, full tone of the baritones and basses. I particularly enjoyed the low-octave melody line of (I've Got a Gal in) Kalamazoo, and the balanced opening of Beautiful Savior. Conversely, the falsettos of the first tenors let GNUC down a number of times, particularly on the verses of Happy Together and That Lonesome Road. Additionally, the size of the group makes their efforts to navigate through more complex arrangements a bit unwieldy. There are sloppy moments on unison entrances and exits, and GNUC came dangerously close to tripping over itself in the quicker refrains of What Shall We Do With the Drunken Sailor. These moments are a trade-off for the strong, enveloping sound on which GNUC prides itself; whether that is the right trade-off to make is ultimately more a question of the listener's taste than of GNUC's skill.

It's a Grand Night for Singing closes with a live track that is nearly indistinguishable from the rest of the album in terms of production. This speaks volumes about the quality of GNUC's tuning, blend, and balance. But it also suggests a lost opportunity to use production to iron out some of the hiccups while also accentuating GNUC's strengths. The arrangements also tended to run together, particularly the GNUC penchant for ending many tracks with a huge dynamic swell. Yet that arranging style must undoubtedly be a crowd-pleaser when supported by seventy robust voices.

Ultimately my tastes run a bit more savory and spicy than It's a Grand Night for Singing. But if you just want to dig into some well-cooked a cappella comfort food, this should suit you just fine.

Is there really anything else in the world quite like listening to 60-odd Minnesotan men jubilantly singing a cappella? Especially for a RARB reviewer accustomed to hearing increasingly hyper-produced albums from ensembles with less than twenty members, the Grand Northern Union Chorus represents a refreshing turn to the traditional.

It's a Grand Night for Singing is certainly traditional. The title track is from the 1945 musical State Fair. Perhaps the "hippest" song on the album is the 1968 Beatles classic Ob La Di. It's just as well; the Great Northern Union Chorus sounds comfortable slinging very-old-school (that you had to walk uphill both ways to get to) anthems with a barbershop twinge. If the track list looks like your bag, you'll probably enjoy.

Grand Night's best asset is the singer's sense of excitement. GNUC has probably sung these tracks dozens of times for all sorts of audiences, but they still sound fresh; the singers are clearly having a good time and are full of energy. Zingy cadences, such as the endings of Pure Imagination, When the Midnight Choo Choo Leaves for Alabam' and Happy Together, are especially nice, full of brightness and sparkle. Beautiful Savior stands out for its sincerity, and What Shall We Do With the Drunken Sailor seems tailor-made for GNU. The few solos are also very hearty.

While the album showcases the singer's zeal, unfortunately not everything is particularly well sung or well reproduced. Pitch issues abound, especially when moving as a block. GNU sings the quieter numbers with a lack of tonal focus, sounding weak and wan. My Funny Valentine, That Lonesome Road and Annie's Song typify this. Without a core to the sound, pitch becomes worse. Cutoffs are typically sloppy to the point of distraction. Finally, the blend could use some work. Inner voices tend to be too prominent, and high tenor often gets lost. This is exacerbated by mediocre recording; the blend problem may be more due to microphone placement than singing. While a little post production, GNUC's sound could improve ten-fold.

Overall It's a Grand Night for Singing is buoyant but lacks tight execution. In live performance, the Great Northern Union Chorus probably overcomes its shortcomings with an energetic stage presence, but on recording it falls a little short.

It's the Minnesota barbershop explosion of unironic joy! Singing, choreography and colored ties for the whole family! The Great Northern Union Chorus is precisely the kind of boisterous men's choir that would sing (I've Got a Gal in) Kalamazoo, and they do. Leave the emo rock at home, kids, It's a Grand Night for Singing! Comb your hair and let's go!

If you are going to include the word "singing" in your title, you had better deliver. And the (many, many, many) men of GNUC can certainly sing. For a group so large, they execute some fairly complicated arrangements without succumbing to the wall-of-sound effect that plagues so many men's choruses. As a result, the album is far more interesting than you might infer from the track listing. If Sufjan Stevens records a Minnesota-themed album, you can bet these fellas will be in the background. Which isn't to say the album sets out to assuage any stereotypes. That Lonesome Road is here. So too are Ob La Di, Loch Lomond, and, yes, What Shall We Do With the Drunken Sailor. You were expecting Radiohead? GNC indulges its love for the standards, and treats each with a reasonable amount of loving care. The production is another nice surprise, demonstrating a healthy respect for low and middle voices, with little of the rustling and bustling that can ruin choral albums.

Some tracks do transcend the genre. A sophisticated rendition of Pure Imagination infuses some jazzy nuance to the group's signature barbershop sounds. The singers make particularly impressive use of silence, hitting cutoffs and attacks with refreshing precision. A straight-faced Happy Together contrasts a moody verse with a big, brassy chorus. The group's intuitive use of dynamics generally keeps Grand Night from becoming stale. Ob La Di has been done, but I challenge you to find a better version.

The group has the chops, so I would challenge them to explore new musical directions. The album features some fine, albeit infrequent, solo-work. Heath Walker's Loch Lomond is almost singularly worth the price of admission. Why not showcase the soloists with some more contemporary arrangements? Audiences may expect the traditional, but is anyone really clamoring for (I've Got a Gal in) Kalamazoo? I was born in Kalamazoo, and I'd be happy to see the vocal world retire that jejune relic.

The sheer size of the group certainly places some limitations on the group's versatility, and the album does begin to drag through its lackluster mid-section. Nothing about Beautiful Savior really locks in for me. It's a smidge out of tune, and devoid of energy at large. Throaty "loo" syllables in the background drown an otherwise acceptable version of Annie's Song. I'm not sure That Lonesome Road works as arranged for such a large group, as we lose the glistening dissonances of the King's Singers's version.

But if there is room in your library for an album of traditional men's chorus revelry or two, I would certainly recommend this one. The men of Great Northern Union Chorus certainly want you to like it, pouring substantially energy and skill into some old chestnuts. If you happen to be a fan of the genre, you probably have It's a Grand Night for Singing already, or at least should.