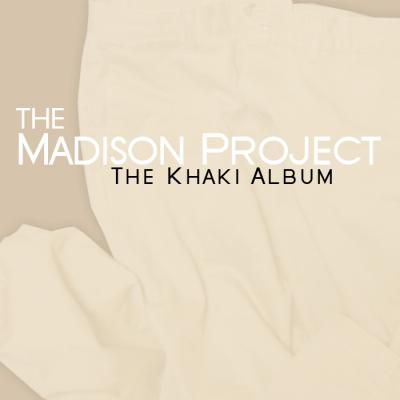 British soldiers began dyeing their cotton uniforms 'khaki' centuries ago so as to better blend in with their surroundings. Now more commonly associated with business casual uniform (or concert attire for many a male collegiate a cappella group), khaki has never been associated with standing out from the crowd. Thus the name of JMU Madison Project's latest album belies the group's excellence and their continued progress towards joining the most elite collegiate singers.

The Khaki Album is a more consistent and engaging outing than Rock Star. First and foremost, the quickly-becoming-ubiquitous Dave Sperandio has put a wonderfully nuanced touch on the production here. 'Dio gives Madison Project a bright and rich tone that works well with their simple, wall-of-sound arrangements (and manages to hide the oversimplicity of the weaker ones). Contrast the light and effective use of distortion in the opening of Counting Blue Cars or the electronic edge to Lovesong with the cacophony on Off the Beat's latest work — who knew! There *is* a middle ground between on the effects vs. pure a cappella debate.

But it's not just production — the boys themselves sound a bit more polished this time around. Graham Cochrane shows up three times as a soloist but for good reason: his wailing on Superstition and sensitive delivery of The Luckiest marks him as one of the stronger male soloists I've heard in a while. I also liked Jordon Herzog's rich take on Clocks. And while the slick factor on this album has risen, the group is still unafraid to have some fun, as best indicated by actually crediting someone with the "over-emotional girl part" in the Ace of Base Medley.

While arrangements probably rely too much on an "ooh" verse opening to an "ah" chorus, the approach is admittedly effective in anthems like Clocks as well as sweet ballads like Bed of Roses. To nitpick, Madison Project still probably lags the leading groups in creative arranging, which contributes to the feeling that The Khaki Album is good but not great. But whereas Rock Star was an eclectic, sometimes disjointed playlist typical of collegiate groups, I found The Khaki Album to be far more cohesive with its mix of moody alternative rock, earnest torch songs, and the occasional rockout track.

With a couple of exceptions. Carolina In My Mind, while capable, seemed wildly out of place sandwiched between a Stevie Wonder classic and surprisingly fun pop medley. And New York, New York was just a complete misfire — brassy and irritating, with a mocking solo that sets the wrong tone for the song and the album. This not only shouldn't have been the opener, but it shouldn't have made the tracklist. And yet, it's more than forgivable in light of the other work on this disc.

Looks like khaki is the new black — and Madison Project is a group to watch for.

Unfortunately, the group doesn't try to stretch its creative wings that far past the standard of the day. That could account for the descriptive fraternity-inspiring name. Most of the arrangements are tame and fairly unchallenging, but are completely jacked to the nines through solid musicianship and crisp production values. It's a listening experience akin to eating blackberry preserves on plain white toast. You enjoy the end product, but it could have been so much better with some honey butter or sunflower seeds.

Some of the problem is what gets lost in translation from stage to disc. I've seen variations of this group perform live for the past five years; they are stellar live, as their numerous 2005 ICCA awards can attest. That vibrant energy didn't come across as much as I was expecting, with the less adorned tracks in the beginning suffering from lack of zest. Case in point, either Ace of Base has to be performed faithfully or given a grand send-up. Paul Puckett's "over-emotional girl part", as it is credited in the liner notes, is where I think they wanted to take the medley, and it just didn't happen. Also, I never saw Phil Witry's performance of New York, New York or Sex Bomb; what must have been brilliant live seemed a bit kitschy here. His stylized performances were creative and full of energy, but I just wasn't enraptured.

Speaking of soloists, Kyle Busey has matured well during his tenure in the group. I hope he understands the compliment I'm about to give him. Upon the first few listens to his solo on Angels of the Silences, I was convinced that I was listening to Keven Quillon, one of the best singers MP ever had.

The second half of the album is pretty stellar, though. I recommend buying the album if for no other reason than to hear Graham Cochrane's turn at The Luckiest. (I would have added Counting Blue Cars to your must-hear list except that Cochrane decided to pronounce the "t" in "often", one of my biggest pet peeves (damn teaching non-regional dialect in graduate school) which almost destroys the song for me.) And his Superstition ain't half bad either.

Weak names can produce sub-par albums; Madison Project was the luckiest this time.

Uniform, bland, and finished with not nearly enough luster, The Khaki Album is an overcooked album from a group that has the potential to serve up a much more palatable offering. Here, though, The Madison Project is held back by gross overproduction, static energy levels, and arrangements that go nowhere.

The Khaki Album's biggest flaw is that it sounds so drenched in the backwash of a runaway autotuner that the group's personality gets completely choked. The liner notes to Bed of Roses and Sex Bomb may as well read "background parts performed by MIDI". Worse yet, on the Ace of Base Medley the third soloist is so drowned in effect as to make the words he sings almost entirely unintelligible. There's nothing wrong with using an autotuner, even if it's used liberally, but when your group sounds like a choir of Speak-N-Spells, you've probably gone over the edge.

These production problems are augmented by an almost total lack of dynamic motion within tracks. New York, New York features a charismatic soloist and an arrangement that builds to two climactic key changes, but starts off at a dynamic that leaves no headroom for the group to actually climax. Stone and Counting Blue Cars become long, mid-tempo smears without dynamic differentiation between verses and choruses, where it is most needed. This is something that should be done first through performance, and that can be elaborated to great effect via production; it appears that The Madison Project did neither.

Though arrangements on The Khaki Album are good for the most part, there are some that stick out like sore thumbs. Clocks is snore-inducing — perhaps an indictment of the uber-repetitive original, but it's an arranger's job to make his charts engaging. The syllables used in the bass part of Superstition are so misplaced that they're laughable. And Bed of Roses drags on for a mind-numbing six minutes.

Still, there are a couple of gems on this album. Angels of the Silences is a rollicking track, and would have been a much better opener than the corny New York, New York. Lovesong is appropriately plaintive, and actually enhanced by the robot-like production. Soloists are good, if not amazing, although I really enjoyed Kyle Busey and Matt Spray, which may further explain the higher marks for their tracks.

Though I was not a fan of The Khaki Album, I am anxious to see what the future holds for The Madison Project. This time around, they overdid it. Next time I hope to hear more soul, less Mattel: put away those Speak-N-Spells, and come back swinging with a more natural sound.

To order this album or other Madison Project albums visit the group's website.