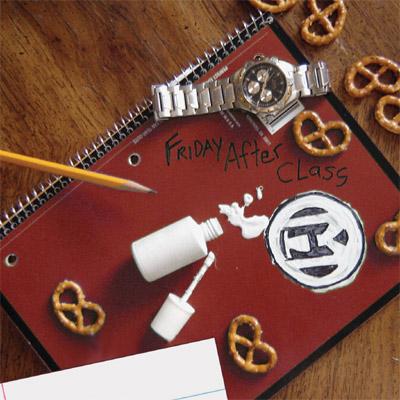 "I had to sing, 'Twinkle, twinkle, little bat! How I wonder what you're at!' You know the song, perhaps?"

"Well, I'd hardly finished the first verse," said the Hatter, "when the Queen jumped up and bawled out, 'He's murdering the time! Off with his head!'"

As I've learned in the publishing business, you can't judge a book by its title. Expecting something lighthearted and loony from the MadHatters, I was let down to hear a leaden album.

The 'Hatters struggle to overcome inertia. Most arrangements establish a volume and intensity after the intro and sit on them until the bitter end. Despite heroic attempts from some big-voiced belters, songs don't build. Moments intending to sound intense instead sound clunky (I Don't Wanna Be, Dare You To Move).

Ironically, the 'Hatters struggle against timing problems. Tempos range from too quick (Britney) to caterpillar-paced (The World I Know), while other arrangements are so repetitive that they seem to crawl along (Dare You To Move). Cutoffs are guillotine-clean (i.e., not very). Entrances that should be attacked are handled softly.

The MadHatters are exactly the kind of group you'd expect to re-hash a cheeky All For You or yet another soulless Walkin' in Memphis. Imagine arranging All For You for your mediocre college men's group, with all the block chords; "oo"s, "ah"s, "bah"s, "dum"s; and repeated lyrics on awkward rhythms. You'd spread the chords too much, demanding a lot of falsetto from your tenors. That real nice guy, the one from the midwest with the smooth, inoffensive voice, would sing the solo.

After the big "Ma'am, I am tonight" of Walkin' in Memphis, the background's lame response is "dah dah dah dahhh dah dah". The background gushes "by you, by you" after a dead ringer for James Taylor croons "How sweet it is to be loved by you".

Friday After Class is smooth, yet bland. The 'Hatters don't take many risks. Even with Britney, a straight-played medley of accelerated Spears tunes that climaxes with one of the many male leads singing "I'm not a girl, not yet a woman", we're unsure if we're supposed to laugh or empathize.

There is a light at the end of the rabbit hole. None of the soloists are afraid to sing from the gut — a very good thing. These guys have some beautiful voices, if occasionally under-styled (and sometimes under pitch). The background blend is splendid. Some of the chords feature nicely structured dissonances and movements. The studio work is great, with clearly placed leads, thumpy bass, well used verb, and a smattering of decent effects. A look at my track scores shows the group can produce strong solo and ensemble performances. The MadHatters seem better at down tempo ballads. With time devoted to arranging songs that build, the 'Hatters could blossom.

Until then, the rhythmic clunkiness, awkward moments, and largely uninspiring arrangements, combined with the live recording of Ave Maria (yes, the same one you sang with your mediocre college men's group), smacks of a young group recording a yearbook album. As is usually the case with yearbook albums, relegate Friday After Class to family, friends — oh, and the Queen of Hearts' guillotine.

The latest release from the all-male MadHatters of the University of Wisconsin, Friday After Class, is the definition of a mediocre album. Pleasant and well made, there simply isn't anything compelling or memorable about this release.

The album, with a few exceptions, is technically well made. Engineering is good but not noteworthy, providing good balance and sound reproduction. It's generally fairly natural sounding, albeit with substantial tuning and EQ; there is little use of distortion. Basses are particularly well reproduced and provide a solid grounding. The upper voices tend to get a little thin and compressed, leading to a syrupy-sweet quality lacking in any intensity. Tuning is impeccable, and there is a lack of wrong notes or rhythms. Percussion is average and contributes little other than fill.

The soloists just didn't work for me. With a few exceptions, such as a spirited rendition of I Don't Wanna Be and a decent attempt on Escape, I found the soloists to have a slew of problems including lack of breath support, poor placement and nasality, being out of range, and a deadpan delivery.

Something else holding back the album is the repertoire. Most songs just blend into each other, as the originals are remarkably similar, interpretations are remarkably similar, and arrangements all follow the same formula. Many tracks read as a rehash of the top-covered men's tracks of the last twenty years. There is a lack of energy on almost all tracks, leading to a pleasant but ultimately forgettable final product.

The two exceptions are Britney and Ave Maria, the only innovative tracks on the album. Britney is a delectable medley of several of Ms. Spears' better known hits which I found entertaining despite again a lack of energy. The album closes with a live recording of the Biebl Ave Maria, long famous on the glee club circuit after its somewhat recent discovery by Harvard. The live track finally conveys some of the energy the group is capable of. Despite being atrociously stylistically inaccurate, and sung more like a Broadway reprise than ancient chant, I found the group's stunning tuning and sense of ensemble compelling. It is easily the strongest track on the album.

A little more originality, energy and diversity of presentation on the next release would do justice to this extremely talented group. In the meantime this album left me unmoved.

As soon as I told my Wisconsin-born girlfriend that I was reviewing a MadHatters album, she jumped on the phone and started calling her friends at UW Madison, dontcha know. She told me stories of daytrips with friends to go see concerts and how her best friend is in love with an unnamed Hatter. (Sorry guys, she couldn't remember which one.) This made me listen, seething with jealousy ... I mean, curiosity to see what the fuss was about. While they don't sing the most intricate arrangements, each track is filled with personality. I could hear how much fun they had singing these songs.

This relates to my strongest impression from the album: the MadHatters are not trying to emulate anyone and are relishing their own identity as a group. The relaxed attitude that permeates the album as a result of its non-competitiveness should come a breath of fresh air to those who are worried that collegiate albums are only being made with the intention of getting on BOCA. Congrats to the Hatters for creating a great MadHatter album and not another run of the mill, better than average male collegiate album.

ON TO THE MUSIC!

The album sinks its hooks with a simple yet enthusiastic groove in I Don't Wanna Be although the song stops a little abruptly for my taste. Prayin' For Daylight keeps the light atmosphere going with great harmonies and a fun ostinato that could have done with out the distracting panning. Dare You To Move is a ballad that kicks up the intensity with rolling block chords in the chorus, subtle upper voices and a great use of dynamic contrast between sections. How Sweet It Is is laid back with a hilarious aside in the middle about winning a goldfish at the fair and having it die on the way home then having it stuffed as a symbol of love. Escape brings back the faster groove that opened the album which paves the way for The World I Know which starts off gentler but builds wonderful intensity throughout the song with a subtle reference to "In Your Eyes" and a not so subtle reference to "Don't Go Chasin' Waterfalls" at the end. All For You keeps the drive but adds a little more tongue in cheek fun. I Remember is a pulsing 6/8 ballad that pushes the album forward nicely into "Walkin' in Memphis" which doesn't rise above the vast collection of collegiate renditions but is entertaining nonetheless. Up On The Roof accomplishes a very calm soothing mood that keeps the listener engaged even though it's a break from the rest of this high-energy album. Britney, a pop diva medley, is executed very well but it's not the music that is the main attraction in this piece, it's the few MadHatters that dress up in drag and pour their sarcastic souls out on stage. (Check out the movie to see some of this; see below.) Where The Streets Have No Name rocks although I wish that it carried more of the rock feeling all the way to the end instead of a hushed choral section similar to the beginning.Ave Maria is well executed and provides a nice closure for Friday After Class as well as proving these guys have classical chops too.

Effects are used tastefully throughout the album and for the most part there is very little alteration of the voice. Part of what helps the singers' personalities come through is that you hear a good percent of what their live concerts sound like — a rare authenticity in collegiate a cappella. . Percussion is strong with the exception of fills where they sound too raw and awkward to be part of the same "drum kit" as the rest of the songs. Solos are heartfelt and appropriate in style and mood. The insert is designed to look like a scribbled, post-it noted, white outed notebook which looks cool graphically but makes it hard to find things in the credits.

The album includes a movie, "Mad Semester". The video is narrated by the MadHatters, one random fan who looks far too excited and an unnamed alum who engineered Friday After Class, who theorized that girls like the Hatters because "I can imagine them sitting in a closet crying."

Available from Mainely A Cappella or through the group's web site.