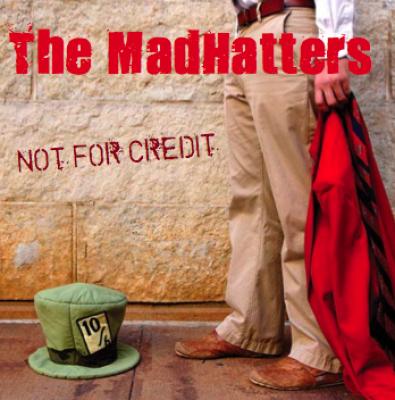 Right out of the gate, The Madhatters Not For Credit blends the "jahdah"s of a live performance with the electronically faux-synth, octave jumping "doo"s that proclaim: studio release. It's the age-old battle of studio intimacy vs. live projection. The Madhatters resolve the conflict in favor a live sound, keeping the syllables and upper-voiced arrangements and enhancing primarily the bass and VP parts. One plus is that, at least for this group, the energy just pops out. Credit rockin' country leads like That's When I Love You and the hair-raising dynamics of tracks like I Believe. But The Madhatters manage the truly improbable with their fully characterized and fantastically musical Lion King medley. Normally, if a group asked whether this would be a wise song choice for an album, I'd have made a passionate speech about how what works spectacularly in a live setting can fail just as dismally on a recording. And though I'd have been right for 99.99999% of the groups, I'd have been wrong here. The Madhatters deliver top notch comedy and top notch singing on this track, and rarely, if ever, have I heard a more successful medley of any kind. The Madhatters have a charm that just lets them break the rules.

The Madhatters could have gone down in a cappella history had every track delivered at the level of the Lion King medley, but alas, there are a number of tracks that aren't blessed with spectacular leads or exciting arrangements. Scores reflect those dips. Such are the choices and politics of the large collegiate group. Good for camaraderie, good for variety; not so much for artistic merit. (Ayn Rand is surely turning in her grave).

Back to beaming about the Madhatters. Theirs is my favorite version of Chasin' Cars — largely thanks to a truly excellent lead performance. (Absorb that compliment. I can't tell you how many versions I've had to listen to. Just seeing that on the track list makes me shudder a bit.) Their Life is a Highway rocks. All their country crossover sounds spot on. Even their JT medley rocks. The only thing knocking tracks down a bit are the occasional vocal strain, obvious or awkward arranging turn (a lot of songs stop instead of end), or less than excellent mixing moment (leads are occasionally buried and inner parts do stick out from time to time).

The bottom line for the Madhatters is contagious energy and engaging performances. A lot of collegiate groups land the notes and lose the core. I'll take the Madhatters' indomitable spirit over that any day of the week.

It's a good thing it's Not For Credit. If this were a real test, the Madhatters would drop a letter grade for poor taste and get docked for general hokeyness. Call me a jaded reviewer, but "cute" songs don't cut it for me.

RARB asks its reviewers to compare albums to all the recorded a cappella they've heard, yet I find it difficult to avoid dragging Not For Credit into the harsh light of the non-a cappella world. The question that dominates the comparison is: who would sing Crocodile Rock, a Lion King medley, Life is a Highway, Take Me Home Tonight, and a Justin Timberlake medley? Who would sing them all on the same album? Well, the Madhatters, I guess. These songs are quirky, in a way that makes me squirm to listen to them in public. Then there are more subtly objectionable songs like Memory and Chasin' Cars, which are a little self-indulgent.

In the real world, i.e. the one that thinks a cappella is kind of a joke, no one would think combining these songs is a good idea, much less reproducing them using only voice. This brings me to my point: the Madhatters have dubious musical judgment and this lack of taste is symptomatic of contemporary a cappella as a whole. So many of us are doing silly things that we don't notice their silliness anymore.

Still, because RARB tells me I must, I will admit that these are the best covers of Crocodile Rock, The Lion King, Chasin' Cars, and Take Me Home Tonight I've heard sung a cappella. If the soloists didn't like these songs, you'd never know it. They sell each song as if it were their last solo. In some cases, the soloists resemble the original artist, with a big-voiced cover of Elton John, a peppy Lion King, a wistful Snow Patroller.

The arrangements and background singing are likewise taut. Songs build and vary from first verse to last chorus. The vocal percussion complements the rhythms built into the songs. While the Madhatters understand how to paint with the broad strokes of open syllables and the pointed lines of guitar-like "jut"s and horn-like "bop"s, their applications aren't novel. The Madhatters get an "A" in "Intermediate Contemporary Arrangement".

The Madhatters lack a variety of solo voices. Many soloists fall into the genre of the well-rounded baritenor, even as they attempt to break the mold. Except for I Believe and the songs mentioned above, you could hot-swap these soloists within a verse and many listeners wouldn't object.

I was bothered consistently by the placement of most soloists in the mix. If visualizing Not For Credit's sound mix evokes a donut viewed edge-on, which it does, most soloists sit on the far edge of the donut hole. They are placed in the center, but too far back and with too many tracks of their own voices layered around them. Instead of cutting through the mix, soloists are often lost in their own muffled mellifluousness.

There is a fantastic exception on Not For Credit, and it is the soloist on I Believe. This kid's voice is just awesome. His tone is a captivating blend of steely edge and tender lover. His style is rock/pop balladeer with a touch of showman. He understands how to modulate his tone across his range to milk it for intensity without oversinging. It was pure pleasure to hear him switch gears and funk out in the bridge. The chorus of I Believe is repetitive, but once listeners realize what they're hearing, they'll savor every phrase.

Brought outside the safe and fuzzy environs of the collegiate a cappella classroom, Not For Credit would bomb. While it's a peculiar oddity of our a cappella community that this album earns "4"s across the chart, I suspect that few off the University of Wisconsin campus will listen to Not For Credit because who really wants to listen to Crocodile Rock, a Lion King medley, Take Me Home Tonight, Life is a Highway, and a Justin Timberlake medley?

Sometimes blending elements of old and new can be disastrous — think New Coke, for example. But updating excellent glee club singing with modern arrangements and production is a winning combination for the MadHatters. Their latest release, Not For Credit, is a shining example that no matter how fancy the bells and whistles, there is no substitute for good singing.

And do these men have pipes. Parts are nearly professional quality. Tuning, pitch and especially blend are outstanding. Often it sounds like one on a part, yet sound remains resonant and shiny. The group's sense of musicality is especially apparent on the final track, Prayer of The Children: a live track, it still holds up to the rest of the album. Arrangements are well-crafted, designed with rich layers that showcase the strong singing. Production is good, with enough oomph to allow voices to shine but not so much as to be overpowering.

The MadHatters excel at ensemble singing. Thus, while remarkably better than on their last release Friday After Class, soloists remain mediocre. Many leads feel awkward and unsure, and lack energy. The biggest exception is Michael Jurken on I Believe. Despite overly prim grammar, he delivers a fierce performance, full of bravado, blue notes and feeling. He offers one of the best solos I have heard all year. Few collegiate groups have the musical chops to pull off Stevie's intricate harmonies, but the MadHatters deliver.

The MadHatters love medleys. Long medleys. While undoubtedly hokey, the Lion King medley is a true gem. With such richly characterized soloists and perky music, the group could have phoned in the background vocals, yet they still provide some of the best singing on the album. Plus, like, it's the Lion King. Doesn't get a whole lot more fun than that. It must be a show stopper live. The Justin Timberlake medley fairs less well: too long, too little direction, a little pointless despite being well sung.

Yet the MadHatters have the same problem as lots of other collegiate groups (and professional musicians): an album with a few worthy tracks and a bunch of filler. Chasin' Cars and I'll Be sound okay but boring, especially when you've heard as many versions are I have. Crocodile Rock had potential to really rollick, but never found its groove. And while well sung, Prayer of The Children is a weak closer and a non sequitur.

There's no denying that the MadHatters are a group that demands attention. If they can continue to sing well and find a little more rawness to their sound, they will be unstoppable. At the very least, Not For Credit shows that some things, like tight ensemble singing, never go out of style.

To order this album, visit the iTunes store or CDBaby.com.