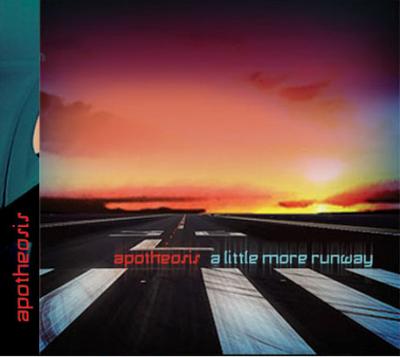 Apotheosis' A Little More Runway evokes a wry smile and a toe tap and now and again a furrowed brow. Countryish pop rock from years gone by is Apotheosis' main course, a specialty they do well with some genuine lone star flavoring from Texas A&M University. Sometimes it's served flavorfully, sometimes a little underdone.

On the plus side, Apotheosis matches leads to lead singers better than most college groups. This, along with some capable production (particularly on the first half of the CD) and full arrangements push their scores a bit higher. The same can be said for the voices themselves: great tenors on top, resonant basses on bottom. But anemic VP, heavy-handed syllable delivery and odd balance in the voices and other mixing-related anomalies bring the scores down again.

Alas, though Apotheosis is informative in providing lead, arranger, original artist, composer and publisher, all in a pleasantly designed package, we learn virtually nothing about the personalities on the recording. A careful reading of the information that is provided will tell you that Apotheosis gets their arrangements from some heavy hitters: Jon J. Ryan of Ball in the House, Ken Purchase, David Wilner, formerly of Blind Man's Bluff and C. Tess (Chris Tess, perhaps? The co-creator of RARB.org).

Production value on tracks 1-6 seems a bit stronger than on later tracks. It's a little as if the backups staged a quiet little takeover as the leads seem to get pushed further and further back in the mix. In Your Eyes is particularly egregious. The sound also gets tinny and the effects a little clumsier.

But though A Little More Runway can't quite escape the yearbook album curse entirely, it's likely to get more thumbs up than down even from the uninitiated.

Old school, but not uncool. If I didn't know the production date, I'd have said that it was the crème de la crème of 1997.

So why the 3? The score reflects the faults of the recording and not the group. Upon my first blind listen to the track Sympathy, I thought they were a professional group making their debut. The sound is solid, the energy is out of this world and the soloist kicks ass. Later tracks give a clearer picture of the collegiate nature of the group — an eclectic blend of '70s-'00s power pop, soulful ballads, boyband showtunes and neo-country crooning — that is charming at best and insipid at worst.

For the purists, the album is extremely clean with occasional tweaking on the percussion and a little enhancement for guitar solos as the only distorting elements. Everything else is effective augmenting, giving the group a strong full-bodied sound. You know these guys are singing, and it is a glorious noise. But while the album is really good product, there are no breakout songs, arrangements or performances.

But these guys are on the precipice for being the next big thing. Seriously, I can't express enough how well they sing as a block. Nice running lines, controlled phrasing, I mean the whole gamut. The blend is nearly spotless. Balance is hampered on Sympathy because of mixing problems. The crescendo into the chorus is mixed to where the duet and the backing vocals are on the same level throughout ... but that problem is fixed on the equally gorgeous Angels. More Than a Feelin' even departed from the original and had a style and flavor of its own. So I know they have it in them. Soloists are sublimely paired with their songs with each giving it their all!

The real culprit is the arrangements … lots of doo-bee-doos in Kiss from a Rose made me laugh. Do we really need another recording of In You Eyes? The pacing of certain numbers like Jessie's Girl, In Your Eyes and Prayin' for Daylight is decidedly square and belabored. RARB co-founder Chris Tess' arrangement of Carry on My Wayward Son is beyond the capabilities of the guys to adequately infuse with the energetic jazz-rock that set Kansas on the map. As it just stops, it's not meant to end a recording, and the multi-soloists lessen the impact with each new voice.

Guys, I will say this directly to you, watch adding the \t\ sound to the beginning of the words "doot" or "doo" unintentionally. It creates a percussive sound that is distracting and amateurish (check In Your Eyes for referencing).

If you don't want to invest your hard-earned cash right off the bat, take a little commuter flight to their website before you decide if you need A Little More Runway.

For the most part, the state of Texas has some catching up to do in terms of college a cappella, and Apotheosis' A Little More Runway is a perfect example of why.

The group's second album features an outdated track list of songs, arrangements are generally weak and empty, and sound production that does nothing to help fix those problems. The percussion is light and weak, and just a small amount of studio effects could have boosted this without sacrificing the feeling and tone Apotheosis wants. Too many songs are slower than they should be and consequently drag and kill the momentum of the album.

Apotheosis goes for the more live and natural feel of a cappella as opposed to lots of effects, but the mixing ruins the sound. The mix is very poor throughout the album. Too often the bass is mixed too loud, which is okay on the lower notes, but sounds very silly on the higher ones. Also, there are times when the soloist is buried behind the background and is not featured front and center.

Yet there are flashes of harmonious brilliance. Apotheosis is at its best when singing good harmonies with thirds and fifths on backup solos and backup parts that aren't specifically meant to imitate instruments (e.g., When You Wish Upon a Star, More than a Feeling). Unfortunately, these don't happen often enough, leading to some poor sounds and poor tuning (most prevalent on Kiss from a Rose and In Your Eyes).

The standout on this album is soloist Seth Grugle. He is featured on four (!!!) songs (Sympathy, When You Wish, Angels and More than a Feeling), giving each one its own flavor. He covers four very different styles of music, and does them all well.

Fans of Apotheosis will enjoy this album, as they can take their friends' and families' songs home, but there is no mass appeal for this album. Most collegiate a cappella fans already have better versions of these songs in their collections.