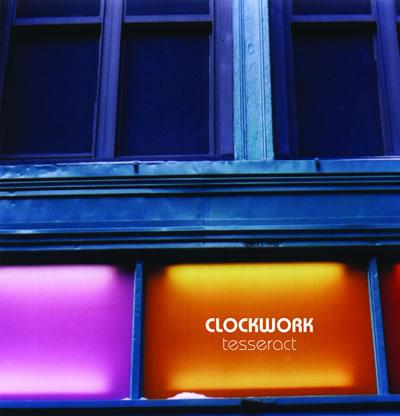 Clockwork has followed up their 2004 EP, the self-titled Clockwork, with their first full length release, Tesseract. The result is another quality album of mostly jazz standards, although it doesn't match the quality of their first release.

Almost everything I said about Clockwork applies here. Stephen Saxon still anchors the group with his impeccable and consistent bass. My respect for this man's ability and musicianship grows with each successive listen; he simply is flawless. On this release he shows off more of his chops with soulful improvs and a decent solo on Donna Lee (though not as great sounding as his bass lines).

The sound still feels a little too compressed for me — it just doesn't have the ring I would expect from a group that sings with such energy and beautiful tuning. Soprano Angie Doctor has smoked her voice up some, but this occasionally leaves blending problems with the counter-tenor line which tends to be as pierced and narrow as they come.

The group is best when lighthearted. The end of Donna Lee is hysterical but also masterfully performed. More tongue-in-cheek numbers such as Rhode Island and Big Cash Deal really allow them to flaunt their energy and sense of style. These are the tracks I find myself signing along with and humming while going about my day. They also cover Radiohead's Creep which, despite a weak solo and stylistically inaccurate treatment, builds to a tremendous climax of full-throated, well-supported and simply fantastic wailing.

I was disappointed with My Baby Just Cares For Me which I felt was one of the strongest tracks on Clockwork. Here it features a repetitive and annoying tenor line and barely allows soloist John Paddock to let loose as he did on their first album.

Overall, a strong album from a very talented group, especially if you like peppy vocal jazz. This album seemed stretched a little thin when compared to the great results of Clockwork. With a little tweaking of arrangements and some better some song selections better suited to the group's strengths I expect a much better second full length release.

Clockwork's Tesseract clocks in around 34:57 start to finish. Not a single track breaks the four-minute mark. Most of the tunes are uptempo, swingy jazz ballads with no vocal percussion. Overall, it's a fun repetoire which makes for a fun listen.

This Bay-Area mixed-gender quintet clearly has proven itself to be a fantastic live group. The group has done very well at the National Finals of the Harmony Sweepstakes, to mention just one thing. Somewhat understandably, Tesseract shows the group mostly trying to capitalize on their successful, live performance style, rather than creating a recording that is distinct from what they do onstage. Mistakes and seemingly insignificant vocal imperfections that are forgivable or undetectable live are made very plain to the listeners' ear when a very basic recording style is employed. The group clearly has great chops, but the recording makes the ensemble less crisp and less tight then they could be.

Unfortunately, the recording itself comes across as somewhat anemic on most tracks. Where a group with four members, e.g. Cadence, can sound like 8 or 10 on an excellent, thick recording that leaves no extra space, this group of five sounds more like three or four quite a bit of the time. With the exception of tracks two and three (which feature some cool EQ tricks), the album is a very natural and does not challenge anything on the innovation front.

The group hits its highest points with three tracks. Clockwork takes on the challenge of Donna Lee with tricky vocalese and a very cool, original arrangement. Coltrane's Moment's Notice has always been a favorite and the group knocks it out of the performance. The track shines with a blistering bari-bass solo. Big Cash Deal is a slinky, hipster-friendly that eschews all the cheesiness and conventionality of a typical a cappella original.

The group hits one real low point on the album with Creep. The tuning problems at the loud moments are so apparent as to render the entire track un-listenable. How it made it onto an otherwise fine album is beyond me.

Clockwork is a group teeming with virtuosity and energy to spare. If the quality of the next recording is anything close to the level of the group's creativity with vocalese and arranging, be sure to have your credit card handy.

Before I get into the thick of this review, I need to get something off my chest:

I LOVE THIS ALBUM, IT IS TOTALLY AWESOME, BUY IT IMMEDIATELY. Whew.

Really, I don't usually gush, but Tesseract, the first full-length album from Bay Area vocal jazz quintet Clockwork, is a real treasure. Complex, textured harmonies, near-perfect vocals, and heaps upon heaps of personality combine to dazzling effect here. And the best part is that these five incredible musicians pull it off with an effortlessness that makes Tesseract an immediately accessible, highly enjoyable treat.

It would be criminal to go much further without talking about Clockwork's bass, Stephen Saxon. As a vocalist, Saxon lays a rock-solid foundation that gives the rest of the group a wide platform from which to launch. He also turns in some truly virtuoso vocal work on Moment's Notice and Rhode Island Is Famous For You that could easily rival the fretting of an actual bass player. But it's as the group's primary arranger/lyricist that he truly shines.

Saxon has the almost preternatural ability to craft arrangements of tunes made famous by the likes of Herbie Hancock, Charlie Parker, John Coltrane, and the Beatles, that make it sound as if those most-esteemed legends had Clockwork in mind when they penned their originals. Listeners will delight in the teasing undulation of And (So) What If I Don't and the labyrinthine counterpoint that unfolds throughout Variation Number #1 on "Nightwatch". As a lyricist, Saxon churns out original lyrics that adhere to the music with wit and whimsy. The additional lyrics in D.C. Farewell are a perfect complement to the originals, adding postcard-like detail to Eddie Jefferson's already evocative lines. Donna Lee is the breezy tale of the imagined title character, whose comic exploits are certain to draw a chuckle from even the most stoic listeners.

Without four other extremely talented musicians, however, Saxon's efforts would almost surely fall flat. Angie Doctor, Clockwork's lone female voice, sings lead parts on many tracks, and her voice — simultaneously sweet and sultry — is always a pleasure. She turns in fabulous work as the soloist and on an instrumental duet with Saxon in Rhode Island Is Famous For You. John Paddock soars on My Baby Just Cares For Me, and Jim Hale offers up his biting, unctuous original tune Big Cash Deal, on which he also delivers a charismatic solo. And I don't think I could say enough about Eric Freeman's work on Creep. His wailing solo and collaboration on the stripped-down, perfectly structured arrangement provide the backbone for what might be the best Radiohead cover out there. Aspiring arrangers of the pop genre would do well to give this track some attention.

I could go on and on singing the accolades of this great group and their excellent first album, but I'm running out of space and superlatives, so instead I'm going to simply offer my full endorsement. Go out and get a copy of this album. It will not disappoint.