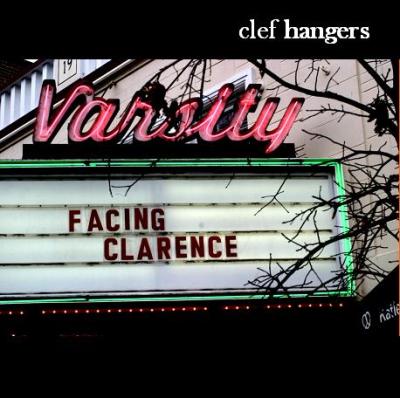 Facing Clarence is overall technically stunning and emotionally unmoving, with spots of brilliance sprinkled throughout.

For the most part, I found this album surprisingly groove-free, despite its generally excellent execution. I got the sense that a dispassionate delivery may have been a choice rather than a consequence. If so, it reflects an even bigger triumph for the Clef Hangers, who have made a first-rate album by anyone's standards.

The bookends are the best. Crazy Train is a hair metal fantasia, all snarl and sonic wave. It gives the sense of realizing a sound previously only heard inside an arranger's head, a sort of uber-sound that satisfies every craving in this style. The other standout, and my personal favorite, was a charismatic cover of Outkast's The Way You Move that had me up and dancing before I even noticed why. The spoken words smolder and the chorus hooks catch exactly the right flavor. It's a strong contender for best cover track of the year, at least from what I've heard so far.

Inside, the intensity seems to back off a little bit. The songs that directly follow Crazy Train felt muted to me, as if the group couldn't possibly maintain the power surge of the opening track. She Will Be Loved felt downright soulless, especially compared to some of the other versions I've heard this year. Smells Like Teen Spirit lifted things back up, with a surprisingly energetic cover of the shoe-gazer anthem. Can You Stand the Rain? caught my ear more for its contrast than its energy — its smooth arrangement was a welcome change from the texture overload of the rest of the disk.

Facing Clarence has a feel that is much more uniform than previous Clef Hanger recordings. There's no trace of the glee club days of yore, which I will admit I remember fondly. There's also little reminder of the group's past forays through country music, 80s pop and other light fare. The liner notes betray a certain nervousness over how this will play with alumni, but I think the Clef Hangers have earned a good reception. This is a great album, probably the best this group has ever made. Have a listen and see what catches your fancy.

Perhaps it's the highest of praises to say that were you to download from iTunes the tracklist of the UNC Clefhangers' Facing Clarence and listen to it, the experience would be roughly the same as listening to the CD. If so, then although it's true, I didn't really mean it as such a compliment.

Stated another way, if you were virtually uninitiated to the world of a cappella, were you not to have read the liner notes, and were you not really care all that much about the craft but rather focus almost exclusively on the end product, Facing Clarence is probably a must-own.

Truth be told, Facing Clarence might very well be a must-own anyway, but I would be remiss if I didn't report both on the enjoyment and disappointment I experienced in listening to this very well-made CD.

If you haven't understood my point yet, then let me say plainly: most of the tracks on this album are flat-out hot. They are well-sung, well-engineered, well-edited and well-mixed. The rampant VP sampling is crisp and clean and provides a strong anchor throughout, while the rich, full, if sometimes overpowering blend is a smooth, velvety bed on top of which the talented soloists show off their vocal wares. There can be little question that in a vacuum, it's a top-notch recording and worthy of being an addition to your collection.

That said, you may notice that I left out well-arranged from the list of things done well. This was purposeful as the arrangements were my single greatest source of frustration on the CD. These are slavish replications of the originals and as such, all manner of ingenuity and creativity for solving the challenges of rendering hip-hop or hard-core rock music a cappella has been abandoned in favor of studio wizardry and sampling. This is not just another one of my rants against studio tricks but listen closely to the amount of actual arranging that is featured here and accurate or not, it *feels* like there just isn't much going on except exceptionally well-thought out and sampled VP, a thumping bass that is also the beneficiary of some EQ magic, and a single block of voices singing chords or rhythm in unison (or perhaps something 2 separate groups jointly forming a background). Sure there are screeching guitars when there should be screeching guitars but just because you can replicate the sound does not mean you always should. And even more inexcusable is that once the group has settled on the replicated sound it wants, they just don't budge. Second and third verses and choruses sound exactly the same as the first. OK, so I understand that's how the song goes, but when a cappella arrangements like these — if you can really call them that — bring absolutely nothing new to the table, I'd rather just pop in the original and go that route instead.

In the liner notes, the Clefs loftily pronounce that since 1977, "a cappella music has evolved drastically. This album reflects that joint transformation through a variety of song selections, arranging techniques, and singing styles." To that I say: hogwash. But for 2 or 3 tracks, virtually the same arranging technique is used throughout and those don't prove much except that on the plus side, these guys sing nicely together without the gimmicks but on the down side, there's little substance to their arrangements without the benefit of technology (though I'll admit to a nostalgic moment hearing original House Jack Brannon Wiles' 15 year-old arrangement of Carolina In My Mind.)

One last point of honorable mention: Anoop Desai. This guy is a freshman? Look out! If he doesn't win a CARA for best soloist before he graduates in 2008, there is no justice.

The UNC Clef Hangers continue their streak of solid work with their newest album, Facing Clarence. Although overzealous production elements, including some issues with soloists, plus an overarching static-ness lend the album an amateurish feel that keeps it from meriting top marks, this latest release is up there with the best college albums of the year, with an eclectic but cohesive track list, a rich, collegiate sound, and a few tracks that rank among the best a cappella covers — impressive work.

The Clefs start things off with a bang, covering Ozzy Ozbourne and Trick Daddy's Crazy Train, which positively boils with energy. I was amazed at how authentic these guys sounded performing such hardcore material, especially in the second half, which ventures into some gutsy hip hop, although the second rap soloist had problems keeping up with the energy (and the beat, for that matter). The real issue with this track, however, and one that is endemic to the rest of the album is the distracting production. The amount of distortion on Crazy Train is overwhelming, and way more than the group needs to achieve a gritty sound. At times, it almost sounds as if the track is clipping, which is probably not the intended effect. Similarly, Trouble is a melancholy tune, but it needs a lighter touch; the Clefs almost drown it with an overly weighty treatment. And on Smells Like Teen Spirit, the gobs of added effect can't disguise an arrangement that is too jejune to really be effective.

The lesson here is that less is more: the Clefs are accomplished enough vocally to not need so much additional enhancement. Case in point: the subtler application of distortion on With or Without You and Dare You to Move adds texture and depth. It also helps these tracks to achieve a dynamic that pushes these songs' emotional content to the foreground. For what it's worth, I'd like to add that the Clef's take on With or Without You is the finest I've yet heard, and Dare You to Move is just perfect. Excellent work here.

The less-is-more caveat applies in another essential area: levels in background parts are jacked up so high that they steal thunder from the soloists. This is most ruinous on the mellower tracks; Lately and Can You Stand the Rain? are the two hardest hit. I shouldn't have had to strain to hear Jason Hamlin's beautiful interpretation of Stevie Wonder's thoughtful ballad, and Anoop Desai would have saved "Can You Stand" from its boring arrangement if he were more on top of the mix.

One word about arrangements. The Clefs know how to craft textured, well-voiced arrangements, but their syllable choices leave a bit to be desired. Though in this world of zhin-zho-ing and fair-neep-a-now-ing it's refreshing to hear a group that keeps things simple (most arrangements follow a variation on the dow-now theme), the scale tips a little too far to the mundane, dulling otherwise great arrangements. Diversity between tracks is good, but I'd like to see the group giving a little more transformation to each individual arrangement.

All in all, Facing Clarence is good, quality stuff. The Clef Hangers sing with an assurance that helps mollify the album's flaws. Looking forward to hearing the next one.