Sons of the Day 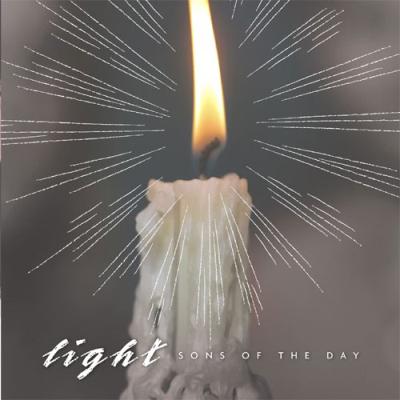 Sons of the Day is an eclectic septet of just-past-college-aged Christians who seem to have met in and around Eastern Mennonite University as the successor group to Full Table. Their stated goal includes "presenting the gospel in an approachable way by combining songs of faith and everyday life". From O Sacrum Convivium to Can't Buy Me Love, the Sons have applied their clear, resonant voices to a spectrum of well-rehearsed, inoffensive, overdone, Christian glee club material.

The phrase "preaching to the choir" comes to mind while listening to Light. If you're already inclined to give classically influenced glee club material the thumbs-up, then Light won't disappoint. That's its strength. The pop and gospel material stretches the group's abilities.

The recording production is clear and utterly unobtrusive, on the plus side. From what I can tell, these gentlemen simply recorded in a circle around a few nice mics. Each take sounds live in the studio. This brave technique works best when the song can't be compared to more skillfully produced versions or when the "raw" take is so exceptionally musical as to make production choices irrelevant.

Of course, Light's "raw production" might be refreshing for those lamenting the proliferation of autotune, and careful listeners will note that even when production falls to the quality common to the late eighties, the voices in Sons are always musical, well-rehearsed, and open-toned. For this listener, that just couldn't carry the day.

But for anyone even the least bit familiar with the last few decades of a cappella, this is a stale recording. The Lion Sleeps Tonight, In the Still of the Night, That Lonesome Road and Elija Rock are beyond overdone, even at the high school level, much less post graduate. Sons' wholly unoriginal versions of these and many other tracks add nothing to the genre, revealing instead a desperate need for arrangements to match the quality musical direction.

Exhausted and inappropriate material and wanting production were an albatross, keeping scores perpetually lower than singers of this caliber deserve. I'm sure that live, this group can more than hold their own, especially with an audience unfamiliar with contemporary a cappella. But compared to the recordings on the market today, Light is terribly weak. Here's hoping the Sons raise some funds for powerful arrangements and attentive production on their next release.

The best thing I can say about this album is that I had a blast singing along with Sons of the Day during a recent trip up to Winston-Salem. I tend to go a little crazy on long car drives, and being able to join in on the songs I learned in high school chorus — or earlier — kept me awake and energized all the way on the hour plus ride.

Unfortunately, I think my "shoo-wop, shoo-ah"s (need I even mention which song?) and "chooka-chooks" (I'm a Train) were a bit more centered on pitch and even-tempoed than those I've been listening to ever since that outing. The secular pieces appearing here combine to make one giant snoozefest if you're not willing to come out and sing karaoke-style with this CD. I'm just not convinced that these guys have any sense of blend, dynamics, or hell, any musical training at all! It's all I can do, sitting in here in my apartment, from belting the melody out loud and drowning out every last off-tune note. I'm sorry, if you can't even get the words right to In the Still of the Night, you really have no business making a recording of it.

Equally annoying, however, are the Christian tracks. From the too-long Gregorian chant-like Holy Spirit, Lord of Light through the too closely miked but no less off tone Everything We Need, I didn't feel one beam of light or ounce of glory. Granted, I'm Jewish, but ask any of my friends and they'll tell you that I've been known to listen to gospel and Christian rock radio. The whole album just feels so blah it's hard to imagine anyone becoming illuminated through this musical interpretation of the Word.

I hate giving a rating of "2" to a group whose ministry is to spread a cappella love, but this album, in its entirety, is truly abysmal with only the very first song, Elijah Rock, and the solo in More Precious than Gold making any sort of impression whatsoever. In fact, I was so closely debating giving it a "1" until I realized that any album that can help me pass the time in the car deserves at least our second lowest rating. This is truly a "friends and family" only album.

PS — Mr. Soprano-Man, PLEASE back off the mike. You MUST learn to have more control of your falsetto. Mostly because you're the hardest for me to sing over, so we're gonna have to work on our blend.

This being my first review of a religious album, I was a little apprehensive. I feared that for an hour hyper-religious dogma would be shoved down my throat. I was delightfully surprised to hear six guys singing about things that gave them joy in life regardless of what the audience thought. That content indifference made me feel like I just happened across these guys on a street corner singing for the sake of singing. That made me happy, too.

I appreciated the little blurbs under each song title with a history of how the group came across the song or where the inspiration for the song came from or what the intended message is. It made Light much more personable than the usual "These songs are top 40 which makes us cool for singing them, right? Right? ...please like us!" albums.

Light has a number of cover songs from vastly different genres. They include the Beatles, Bob Marley, Take 6, Ladysmith Black Mambazo, and James Taylor. Some of these covers are more successful than others. For example, I noticed that the more the "Sons" dove into the pop genre, the more forced the performance became. This inversely made the message of the song lost in a feeling of "this song is here just to be here". For a group whose primary concern is to spread a message, they should have paid a little closer attention to the track list and kept some songs for concert use only.

The songs are relatively short and no one song is exactly the same as any other on the album. This prevents the feeling of repetition that the group courts by having 24, that's right, 24, tracks on the album. However, "Sons of the Day" could have cut that down to 12 and kept the integrity of Light as well as galvanizing their strengths.

Tuning is good throughout, but there are a number of chords that, to stay with the light theme, glow more effectively than others. The subtle amount of reverb wonderfully supports the Sons when they are singing slower ballads and more chant-like songs, which are unequivocally their strongest moments.

Should you buy this album? If you like soothing religious music you will like Sons of the Day, but you'll have to sift through the album to make a playlist of the good stuff. If not, then the pop covers aren't spectacular enough on their own to warrant the cash. I enjoyed my encounter with these seven guys even though this isn't the kind of music I search for at the store.