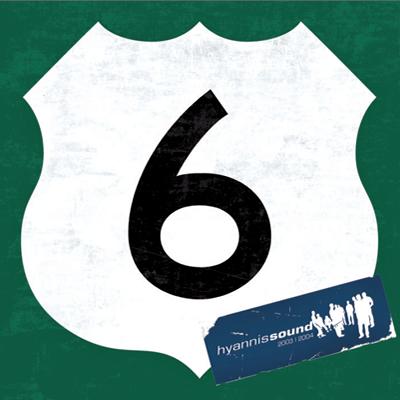 I've been a casual fan of Hyannis Sound for some time so I can only imagine how abso-friggin'-lutely nuts their diehard fan base has gone and will continue to go for their latest, and first fully studio-produced release, entitled Route 6.

There. I could end the review there and you'd know how I felt.

But if I stopped there, in addition to ticking off the editors at RARB, I wouldn't get the chance to single out a few folks. Seems almost redundant to praise people like Ed Boyer and Samrat Chakrabarti since we've basically come to expect perfection from them, but listen, really listen, to the layering of the background vocals in Big Yellow Taxi or the arpeggiated chords in the opening in Jump or the "synth string" section in Love Train or the the little extra "groove" in What's Going On, and you'll unquestionably get a finer appreciation for the art, and not just the technical skill, of brilliant arranging.

Keeping my remarks too brief would also preclude me from mentioning the soloists, who are out of this world. Again, not altogether surprising since HS is, on some level, an almost all-star team of northeast collegiate a cappella. But Micah Christian on Don't Cry and Victor Sandman on Still Haven't Found What I'm Looking For (a song I never wanted to hear again a cappella until I heard this version) completely blew me away. Indeed, if there isn't a CARA nomination in store for one or the other, a Best Cover nomination upcoming for Don't Cry, there is no justice in the world.

Oh yeah, don't forget the producers, mixers and engineers. Pretty dang flawless would be the best way to describe their work. A great mix, a great sound, great effects — just a fantastic aural experience all around.

Since I'm waxing rhapsodic, I guess I can throw in a few minor quibbles. There's a healthy and very produced dose of VP all over this album, with the guys fully taking advantage of being the studio for a change and not in front of a live audience. With only one exception (a too mechanical-sounding background on Boys of Summer), that never bothered me, but it might have been nice to know who the VPists are on each song. Similarly, it might have been nice to know which group recorded which song since the album covers two summers' worth of HS. And lastly, on Spain, who are the three scatters (they sound like three different people)? I actually had a note after Bests Thing Happen While You're Dancing that while that song is still pretty terrific (if a bit basic), perhaps vocal jazz is not HS's strong suit. But then I heard Spain and crossed that one out. Chick Corea a cappella! Amazing.

I really have nothing more to say. If this review doesn't convince you to buy this album, perhaps nothing will. But it will be your loss.

This is the kind of stuff that makes non-singers wish they could sing, and singers wish they were good enough to be in a group like this. For both of these populations, putting Route 6 on repeat may be empty solace, but damn sweet solace it will be.

Route 6 largely takes care of the inconsistency that has marred past Hyannis Sound albums. Eschewing the past approach of mixing in live (and often flawed though fun) songs, the group works with the esteemed John Clark to create a sparkling, frothy elixir of all studio tracks. Clark's production does what in my estimation all good studio work should strive for — polishes, layers, but never hides the fact that these guys can SING. If the occasional "hey, there's no way they could sound like that live" effect sneaks in, I can live with it. This stuff is hella fun, and tastes good all the way down.

HS can't escape the typical guys' group staples that have cropped up in recent years, like Don't Cry, Big Yellow Taxi, and Still Fighting It but manage to put far more energetic and passionate takes on them than most I've heard. Extra points for passing over the obvious John Mayer singles for a more obscure tune (even if Clarity trudges along a bit at times). And then a hodgepodge including the Pointer Sisters, Marvin Gaye, the jazz classic Spain, and Irving Berlin that somehow flows far better than it has any right to do. Much of that credit belongs to the singers, whose energy and strong solo work lifts a bunch of solid songs and arrangements into the stratosphere.

HS, Samrat Chakrabarti arrangements, and U2 anthems might need to be inducted into the CASA Dream Team Hall of Fame if they hit another one out of the park like this. It's hard to match the perfection of Pride (In the Name of Love), but Chakrabarti's heartfelt take on Still Haven't Found What I'm Looking For comes pretty close. Victor Sandman's wailing and the gospel twist that surprises the listener about two-thirds of the way through deserve a good amount of credit, and may or may not have misted up this reviewer's vision. The other standout track, Boys of Summer, sees Eric Fosbury outdoing Don Henley and his backup crew delivering a heartwrenching rendition that will have you lamenting every summer crush that ever got away. The chord downshift effect in the beginning of the second verse is worth the price of this CD alone.

Hyannis Sound is by definition an all-star crew, as members audition every summer and typically hail from elite collegiate groups all over the nation. This has made their past spottiness all the more frustrating, so it is a pleasure to see them finally live up to their full potential. Now um, if you'll excuse me, I've got to go take the stereo off repeat.

Great voices and great energy creates great potential. But I've come to expect two certainties from engineer John Clark — a top-heavy mix and an over-processed feel. These certainties hold true on the new album from Hyannis Sound, creating a conflicting appreciation for the Cape Cod singers.

While the over-production makes for a tiring drive down Route 6, the top-heavy mix actually works in Hyannis Sound's favor. Their talented, R&B-esque tenor section gives each track flair and power. Love Train kicks because of the dazzling, should-be-out-of-range notes, and Still Haven't Found What I'm Looking For builds excitement because of these same tenors, who gradually break from the group to add sensitive complex harmonies. I never thought I'd hear an album that warrants a top-heavy approach, but Route 6 demands it.

There is even a spot that warrants Clark-style over-production. Jump is a blast because Clark captures the synthesizer so effectively — you'll really slip back a few decades. But Clark gets carried away with his synthesizer artifice on Boys of Summer, where the synth motif that made Don Henley's song famous becomes indistinguishable from the actual Don Henley song. And it turns out that when you overproduce and over complicate a beat as fast as Spain's, the result is rather like a drummer coughing and sneezing at the same time. I get offended when I hear an engineer create instead of enhance — we're paying for an a cappella album, aren't we? Clark often becomes a master ventriloquist, throwing a voice so far from the body that we don't believe the voice is actually coming from the body anymore.

Thankfully, production has nothing to do with song selection and soloists, areas which excel on Route 6. Big Yellow Taxi is one of the tightest, catchiest arrangements I've ever heard. You'll be singing with the block on this one. Vic Sandman had me shaking my head in disbelief and awe at his performances on Love Train and Still Haven't Found What I'm Looking For, and Micah Christian (What's Going On and Don't Cry) pulls off pleading Marvin Gaye and gritty Seal perfectly. Finally, the Best Things Happen While You're Dancing isn't a track I'd expect to hear on an album where Justin Timberlake makes an appearance, but it was a welcome, pleasant surprise. Very smooth, boys.

Radical, but thoughtful: Hyannis Sound should take a stab at mixing their own albums. Given that they all come from powerhouse collegiate a cappella groups, the result should be quite good.

To order this album go to A-cappella.com.