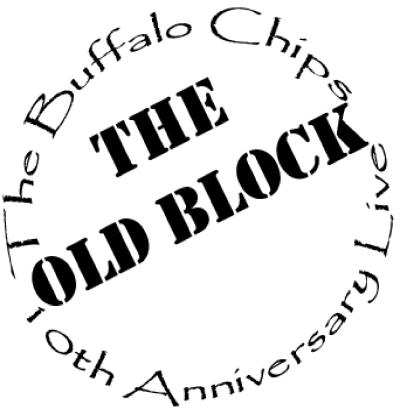 Imagine your grandmother approaching you with a photo album of last decade's family reunion. It's three-ringed, faux leather-bound, a little sticky, the pages are yellowing. It's about to burst, pages refuse to lay flat. Those little, sticky black triangles tenuously grasp two or three corners of some photos. The pictures are fading, most are off center and either dim or bleached out. You think you've heard of some of these people, that name sounds a little familiar. Some memory bubbles up before — oh yeah, I danced with her at Cousin's wedding when I was eight! Oops, but grandmother's memory has slipped a bit. This is your grandmother's sister's photo album, oh dear me! You don't know any of these people!

Imagine, then, that your great aunt walks in the door at that very instant and asks you to rate the quality of her photo album on a scale of 1 to 5, elaborating in three to five hundred words.

This is my challenge with the Buffalo Chips latest submission, The Old Block. Why the Buffalo Chips would submit this compilation for review is beyond me. If it's for sale, don't buy it. The purest definition of "yearbook album", The Old Block is a memento, pure and simple, for 'Chips alum and their understanding wives, girlfriends, deaf great-aunts, etc.

You can stop reading this review now, or you can enjoy "You might be a yearbook album if..."

A few historical notes on this 10th anniversary compilation: I've now heard 71 tracks from the 'Chips, more, I'm sure, than most of the 'Chips themselves. Eric Fosbury would get my vote as Buffalo Chips MVP. The guy's arrangements are consistently plucky and do a great job emphasizing the good parts of good songs. Mike Schiller would be a close number two for his arranging contributions. Eugene Lubliner is the group's historical best soloist, including the strongest solo performance on this album.

And so, much as I used an old, borrowed DAT recorder to tape my college group's live shows, so have the Buffalo Chips recorded theirs. There is nothing wrong with this practice. What is wrong, however, is making non-'Chips listen to 23 tracks of it. Thanks, guys.

You have got to be kidding me, right? Is this album supposed to be an accurate reflection of the group which has received some pretty consistent high marks on their last few reviews from RARB? Apparently, as is the case in many of the recordings coming our way, The Old Block reveals that what's behind the wizard's curtain in the disastrous land of Oz is a lot of smoke and mirrors masking the lack of strong musical fundamentals in the current group.

And I have to say the current group, because when various incarnations of alumni take the stage, the sound and quality generally improves.

I would like to know which alumni (other than the soloists) made it back for the show. One of the founding members, Burt LaFountain '96 gave a very heartfelt rendition of Desperado which I'm sure was infused with the emotion of being back with his boys. That kind of historical and "feel-good" information/nostalgia always does me in.

The second half of the disc featured the more recent alumni like Darrell Belch and Eric Fosbury (both of Hyannis Sound fame), John Taylor and Eugene Lubliner who all have received accolades in the past and for good reason. Belch's solo on Underground is the most charismatic and polished while John Taylor's turn on Don't Cry was the prettiest if just a little on the square side.

My December is the best of the current group's repertoire and will probably be brilliant once a good engineer tweaks it within an inch of its life. And the passing of verse sections among what I think are the yearly soloists — like the passing of the torch — got me right in the middle of my sentimental heart.

The Ducky Megamix? LOL! Thanks.

This is less than a yearbook double disc (yes, you get two for the price of one); this is completely on the vanity scale. They know it pretty much sucks, but they had to capture their 10th anniversary. I can't fault them for that. But from the looks of the cutout insert, here's thinking that they know that it's not destined for mass consumption. And so they'll understand why I can't encourage anyone to purchase this product.

Buffalo Chips, I put this to you: why did you submit this album for review?

For all I know, the Buffalo Chips might be capable of putting out a good album, but The Old Block, a live album recorded at the group's 10th anniversary concert, leaves me with nothing but doubt. This is such a shoddy recording that frankly, I can't fathom why someone wanted to subject it to scrutiny.

Technical aspects of this album are not up to snuff. The sound quality isn't at the bottom of the barrel as far as live recordings go, but it sure isn't anything special; I'd rate it about one step above bootleg. Tuning is nothing short of a disaster. Timing seems to be another major issue. Many songs (Clocks, Desperado, Brandy) are simply performed to fast or too slow, while others (My Sweet One/Poor Heart, TV Medley, Mysterious Ways, Send Me On My Way) are sloppy internally, with parts intermittently falling out of sync. And for a live show, these guys don't sound nearly as pumped up as they should be. They don't really sound pumped up at all.

An even bigger problem is that The Old Block lacks any sense of polish or professionalism. The CDs themselves are just burned copies, with the title scribbled on in permanent marker, and the track list is a flimsy home computer printout. And on the actual recording, group members don't seem to take themselves — or their music — seriously. Several tracks feature group members dissolving into fits of giggles, and at one point there's even an apology for what they seem to realize has not been a good show. Such interjections are not going to get any listener excited; as it is, I had to struggle just to pay attention.

This is an album to pass on. It's not as much of an album as it is an afterthought, as if some group member said "Hey, maybe we can make a few extra bucks off of this!" The whole album plays out with a "who cares?" attitude. And that answer to that question is "Not me".