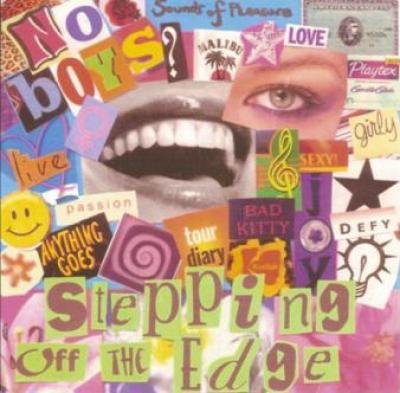 Remember that time when we sang that song on the waterfront, and those guys came by and one of them started breakdancing and then tripped on a french fry? That was so much fun. And I love that song too — and that other one that you used to do while we held up signs in the background that turned sappy lyrics into punchlines. Oh man — I bet I still have a tape of that somewhere. If they could hear us now...

There's really just one problem with this album — I wasn't there for any of that, at least not for this group. Which means that I, and most unconnected third parties, won't be getting much out of this album. It's really out of tune. Pretty much everywhere. The voices are nice (particularly Megan Roy and Nita Chawla), the arrangements are average, but the CD as a whole sounds like a rehearsal tape.

At least these songs are familiar and fun to sing along with. The soloists all have pleasant voices, so if you don't listen too hard you can have a good time singing along with the Madonna cover, the Indigo Girls tune or the Paula Cole number. You can make up new Alanis Morrisette words to your giddy heart's content. ("I'm drunk and unhappy. I'm dumb but I whine. And you have to hear it, baby!") And you can wonder why there's this weird car horn-buzzer noise in the background of the otherwise pretty No Surprises.

That's all I'm gonna say about Stepping off the Edge because I don't want to ruin anybody's fun. I mean, I've got a cabinet full of cassettes that sound kind of like this, and just the other day I copied some for a friend who'd lost his. We listened, we yelled out the punchlines to that great superhero skit ("Fabric Man, and his sidekick Lint!") and we had ourselves a good old time. You just had to be there, that's all.

Sounds of Pleasure thrusts themselves into the world of recorded a cappella with their debut Stepping off the Edge. Unfortunately this all-female ensemble from the University of Pittsburgh offers a sub-par album.

The main problem with the album is lack of vision. Recorded over a four-year time period with an astounding 32 different singers (for a group that only has about 12 at a time) featured throughout the 15 tracks, there is nothing consistently holding together its various elements.

Another problem is length. Tipping the scales at almost a full hour, it's just too long. An hour can be a stretch for even the most top-notch professional groups to make each song compelling and interesting, something that almost none of these tracks can claim to be.

The recording quality and technique vary widely from track to track as well. The album opens with Beautiful Day, a track with excellent sonic reproduction and professional sounding mixing and editing. Other tracks, such as Wide Open Spaces, feel like they were recorded live or in a large room gathered around a single mic. Track to track there's great disparity in reproduction, balance, blend, equalization, soloist levels, etc. The result is a hodgepodge that just doesn't go together.

In general, the singing isn't usually that great. Tuning ranges from so-so to flat out awful. Ladder is the worst offender, repeating what sounds like an unintentional tonal cluster throughout with several odd sounding near-modulations. I must give the sopranos credit for their ability to sustain descants (which they seem to do on just about every track), but they are flat much of the time.

Soloists are also inconsistent. Most tend to be below average, though I am partial to Unterburger in Always Be My Baby and Chawla on Cherish. Soloists are even inconsistent on different tracks — Christian sounds spirited and in control on One Hand in My Pocket but strident and shouty on Beautiful Day, and the aforementioned Chawla just sounds whiney to me on Near You Always.

The group is best on faster numbers such as Always Be My Baby, Cherish and Wide Open Spaces. Here, you can catch glimpses of the personality and energy that might make SOP's next go-around more enjoyable. Case of the Ex has great energy and style, but the arrangement is just too sparse and uninteresting to make it a winner. These women can also use some help from an experienced producer who can help steer the project from beginning to end, and especially in the studio. There is some talent there, but it just hasn't yet been tapped.

Sounds of Pleasure's new album, Stepping off the Edge, made me want to do just that. From the moment I saw the album to the last song, I was haunted with nagging anxiety.

The cover is a collage of magazine cutouts that made it blatantly obvious that this was an all-girl group (mainly because there is a picture of a Playtex box in one corner), but until I searched around on the liner notes I had no idea what the name of this group was. It very well could have been "Anything Goes", "Tour Diary", "Bad Kitty" or, mostly prominently on the page, "NO BOYS?".

Now, I realize that all-girl groups have a sonic disadvantage unless they have some killer altos and some VP with the toms to hold down a solid foundation, but usually those groups compensate with a song choice that doesn't emphasize that weakness. Sounds of Pleasure throws tradition into the wind and sings songs like Beautiful Day, Six Underground and Again I Go Unnoticed that show just how little rhythm section they actually have. In order to compensate for the lack of percussive support, they create a cacophony of upper parts that rarely change syllables, rhythms, or dynamics. Think of a guitarist playing only their top three strings twice as much to make up for the bottom three.

Not every song on the album required a thumpy low end to have a personality though. However, those songs were either too loud or too soft and didn't flow from one to the other for contrast. I had to turn my stereo way up to hear the background parts in Somebody and then up even further to hear the distorted speaking voice in the bridge. And even then I couldn't understand what she was saying. Too often, songs were just overly repetitive, which only served to pour salt in the aural wounds that passed as arrangements.

Soloists consistently sounded nervous and shaky as if they were plagued by red-light fever. Blend was elusive as a result of apathetic tuning. Pitch aside, the biggest offender was timing. Not only would the entire group fluctuate the tempo, but individual parts had a hard time staying together.

Ironically, there were very few Sounds of Pleasure to be found and this album is mediocre at best.