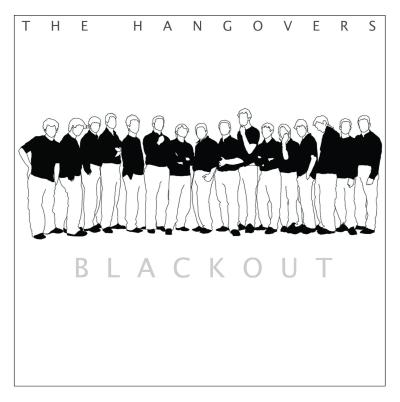 With names like The Hangovers and Blackout, one might expect a wobbly album from a group of lusty livered lads. Blackout is not shaky at all, in fact. My first impression, from River to the Sea, was of a group of nice, clean cut, respectable young men who I would consider trusting with my daughter, if I had one. Despite brief second thoughts after the back-to-back pedophilia set of Michael Jackson's Human Nature and George Michael's Father Figure, I concluded that Blackout is quality a cappella singing fashioned in the modern style but without the feel of fad.

Blackout is lush, like a good buzz. A look at the tracklist reveals a softer side; the group prefers slower songs, and its forte is sensuous singing. Nightswimming, Your Body is a Wonderland, Wicked Game, and Father Figure are all classics of the sensual male a cappella soloist. The arrangements fold in layers so gradually that the effect is subtle, like a smooth bordeaux that catches up with you after the second or third glass. Complementing the group's sumptuous tones is a healthy hand on the reverb.

Yet, the album features a clean aftertaste, sonically crisp as any modern a cappella album. Tracks feel clear, transparent and light. Tonal effects are sparing and therefore effective. The vocal percussion sounds vocal, not computer generated, with appropriate patterns and reasonable equalizing. Background voices sound warm and nearby, enveloping the listener in a blendy blanket.

Enveloping a bit too much, actually. Soloists drown in that blendy sea of blankets, struggling to be heard clearly. Too often, tenor and baritone lines strain and overpower the solo, forcing the listener to pick lyrics and inflections out of the swirl of sounds. A mistake too common in a cappella arranging is to focus attention on intricate backgrounds but in this case the studio is at fault for misprioritizing the balance. Soloists should draw the ear, especially in such a languid repertoire as this.

These buried soloists are quite good. Their style and technique is sonorous, fluid, and warm, perfect for these songs. With a few exceptions, leads don't sound like the original artists, which is refreshing. A new voice bringing a fresh perspective to a familiar song is so much more engaging than a copycat performance.

Blackout's main weakness is that it goes a bit far with the lushness. The cocktail of well-intended reverb, swirling backgrounds, and solo imbalance makes for hazy brew. The group is not good at punchy songs. Let My Love Open the Door, 5 O'Clock World, and other upbeat songs lack sting. Cutoffs hang over. Rhythms don't pop and chord movements are not taut.

The Hangovers reveal mature tastes in their song choices, mixing crowd pleasers with interesting, new songs. By taking liberties with a few melodies, deftly inserting references to other songs, and lightly tweaking the usual lexicon of syllables, The Hangovers update a cappella standbys that could easily have dragged Blackout into the abyss of mediocrity. Instead, these songs have staying power.

Blackout is a sonically lush, sensuously sung, feel good album. Get it, if you like. I won't stop you.

The Hangovers of Cornell deliver a solid album built on strong singing fundamentals with their latest release, Blackout. Combining some of the best elements from the traditional glee club sound and more modern slick production, the album is fun to listen to and doesn't get stale.

The Hangovers are a glee club at heart. This isn't surprising when one considers they are a sub-set of the Cornell University Glee Club. The core of their sound is grounded in great vocal production, solid singing, naturally well-tuned harmonies, and an ensemble-based performance. It especially comes out in their pure elongated vowels, stellar but well-coached forays into falsetto, and mostly organic percussion. With a few exceptions, arrangements tend to be simple but have solid performances. They particularly show off their vocal chops on the live Wicked Game.

This album is far from traditional, however; studio work helps them out as well. Reproduction is excellent and mixing is generally pretty good, especially on rhythmic lines in the middle of the texture. Blocks have great dynamic contrast but don't really resonate as much as they could, sounding a little too compressed. Several intricate arrangements, such as Human Nature and Every Little Thing — and unique EQing on the latter — show flair to a more modern sound. The album also features two originals, the clever Facetime and the outstanding opener River to the Sea. I find myself liking the less traditional tracks the best, with Every Little Thing my clear favorite.

Solos are hit or miss. McCarl gives a great performance on Father Figure, another one of my favorite tracks, while Goldin is spectacular in Wicked Game. Unfortunately many other soloists are mediocre at best, with most trying to sound too much like the original.

The album's mix of old and new is a breath of fresh air in this hyper-produced aca-world, and illustrates the power of starting at the beginning — great musicianship.

The Hangovers don't do a whole lot to separate themselves from the pack of all-male collegiate a cappella recording groups on their latest release, Blackout. The album is truly the epitome of today's average collegiate recording. It has a track or two that stands out on the positive and negative ends, but the group doesn't take any chances. What you hear is what you get — this is the Hangovers in all its bare-boned glory.

Blackout is effects deprived, which is good and bad. The missing distraction of all that high-tech studio magic allows us to hear the best part of the Hangovers — the soloists. These guys can sing! The best of the best are Andrew Goldin, who channels his inner 1980s Michael Jackson (in a good way!) for a stirring turn on Human Nature, and Clayton McCarl's inspiring rendition of Father Figure, which convinces me that he is the long-lost brother of Ball in the House's Aaron Loveland.

But on the downside, Blackout left me feeling naked and unsatisfied, wishing that the group would have clothed its album with some effects. What the Hangovers have given us is decent (it probably would have been BOCA material in the mid-'90s), but it could be great. I can only imagine how good this album would sound if more studio wizardry was used or the recordings were sent to one of the a cappella über producers. Blackout is so close to being great, a little studio magic could have really made a major difference. The Hangovers had the potential to release one of the best all-male albums this year.

I'm sorry for placing an unrelated rant in the Hangovers' review, but is there a song out there more mediocre than Your Body is a Wonderland? This is no fault of the Hangovers as they can't be blamed for performing a song so many people liked, but I hate that the John Mayer song became such a hit, because if I hear another a cappella recording of that damn song, I'm going to throw my speakers out my apartment window onto the Santa Monica Freeway causing another accident and thus slowing down Los Angeles traffic even more.

And while we're at it, I pray every night before I go to sleep that a cappella groups will stop releasing live concert tracks on their otherwise all studio tracked albums. The Hangovers give us another example why it's never a good idea. For the most part, the tuning and blend on Blackout is good. And then, all of a sudden, track 9 comes around and shows some of the group's real weaknesses. The very first chord of Wicked Game was out of tune! It's really too bad because Goldin's solo is pretty good. Collegiate groups will learn one of these days ... or so I hope.

But what it all comes to, and if there is one piece of advice I could impart to the guys for their next album, it would be to continue doing what they're doing musically, but find another engineer who is willing to push the envelope and make things more interesting. Take some chances, catch up to the a cappella recording pioneers, and give groups like the Beelzebubs and the Aires a run for their money.

To order this or other Hangovers albums, visit the group's online store.