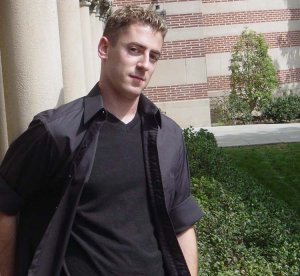 Geez, ok so I like a cappella more than I ought to. Even my a cappella friends think I've gone overboard with it. But oh well, to each his own.

I had never even heard a cappella, or knew what it was, before I went to the University of Michigan to get my bachelor's degree in sports management. Then all of a sudden I was singing in two a cappella groups: the all-male GMEN (or Gentlemen) and the Jewish-coed Kol HaKavod. There I served as President of Kol HaKavod, became their primary arranger and brought vocal percussion to the Jews in Ann Arbor. Through a grandfather clause, I stayed in the GMEN for a year following graduation, after which I left for Canada to join the CARA-award-winning professional a cappella group, STREETNiX.

Missing school too much, I headed to the west coast to study for my master's degree in broadcast journalism at USC, where I was the vocal percussionist for the USC SoCal VoCals. A cappella even made it into my school work, as my thesis was an hour-long docu-style newsmagazine piece on the growth and explosion of a cappella music over the past 10 years.

Aside from what people may say, life does exist outside a cappella. In my other life I work in sports broadcasting for the Armed Forces Network. I am in charge of scheduling sports programming on four television stations that are broadcast to the U.S. troops in more than 175 countries around the world.

In whatever time I have left, I love to go to the movies, watch my beloved Detroit Pistons, listen to lots of music and play with my DVR.

And yes, my last name really is Slutsky. Isn't it great?